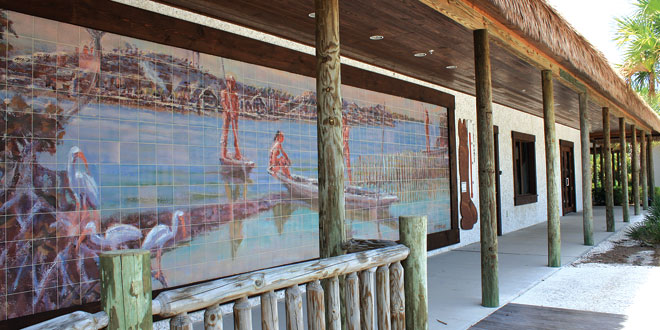 “The Marco Island Historical Society has so many volunteers, and many of them have regular jobs, too,” explains Bell. “There’s some progress to be made here, and that’s why they decided to hire a professional to manage the collections.”

Born and raised in Royal Palm Beach, Bell is a true Floridian who even spent his undergrad and graduate years at University of Florida. “Being from Florida, I love learning about its history, especially the Calusa because it was something that was never taught to me,” Bell explains. With a Bachelor’s Degree in Anthropology, a Master’s Degree in Museum Studies and over a year’s time spent in archaeological fieldwork, Bell has certainly become well versed with the Calusa Indian lifestyle.

His first task is 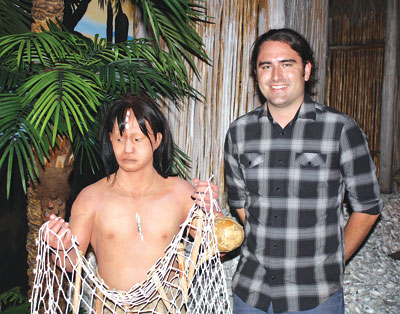 to master and organize the Calusa collection at the museum – a rather daunting task. Recent archaeological digs in the Caxambas area have unearthed thousands of ancient artifacts.

“The big idea is to show visitors that people have been living on Marco Island for thousands of years,” explains Bell. That starts with the Calusa exhibit, something that was started but sort of stopped dead in its tracks without the proper vision. “My first step is to develop a hierarchy on how to tell the story,” adds Bell. Major changes like this take time, however. Bell expects to see some changes shaping up in 2014. As things develop, he will be the point person to organize artifacts, communicate with design companies, determine layouts and work with the MIHS board and other outside influences.

Bill Marquardt would be one such influence. A mentor to both Bell and the museum, Marquardt has been aiding in the ideas and creation of the Calusa exhibit from afar. Located at the Florida Museum of Natural History in Gainesville, Bell worked closely 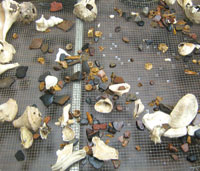 No easy task indeed! Austin will have plenty of items to categorize as this is only a tiny sample of what was found during the recent Caxambas dig.

with Marquardt, learning much from him about the ancient Indian civilization that is the Calusa.

Having only begun on June 3, Bell is excited to get to work. “My parents say this is the perfect job for me. Ever since I was a kid, we would go on vacation and I would collect things, label them and make displays. It’s kind of nerdy.” But really kind of neat. Bell has been preparing for this job his entire life.

And the location isn’t bad either. “I love Marco so far. The people are so passionate about their local history. I’m excited to be a part of that and bring something to the community that they can be proud of. Working with the Collier Museums and the Marco Island Historical Society, I’m just a small part of a much larger team,” says Bell.