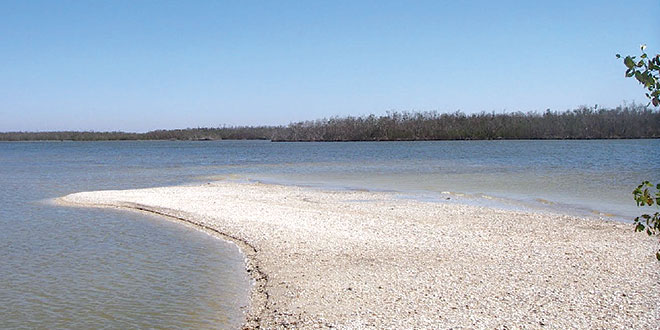 During its Aug. 1 regular meeting, the city of Marco Island Planning Board approved a proposal from the Marco Island Historical Society (MIHS) to name 11 currently unnamed alleys around the island after major players in Marco’s history. With a vote of 6-1, the proposal was passed onto City Council for review and approval.

The proposal is the brainchild of Marco Island historian and attorney Craig Woodward, who worked with several members of the MIHS to come up with local historical figures who were not already recognized in some way around the island. The resulting list includes modern Marco marvels, early island pioneers and important figures from the Key Marco Cat and Cushing expeditions.

According to Woodward, the alley locations correspond to the persons or events after which they will be named. For example, the alley behind Sasso’s and the Sea Turtle parking lot, which stretches from Winterberry Drive to Valley Avenue on the south end of the island, is slated to be called Muspa Way for the Indians who lived on Marco Island between 500 B.C. and 1300 A.D., predating the Calusa. Woodward found that early European maps identified Marco Island as “Muspa,” “Muspa Island,” “La Muspa” and “Punta de Muspa.”

the MIHS’s alley proposal in depth through the words and pictures collected and written by Woodward. We began with modern Marco in our Aug. 8 issue. This issue we are moving on pioneers from Marco’s past, and next issue, we will wrap up with key figures from the Key Marco Cat and Cushing expeditions.

James Vensel, Deltona Corp.’s original land planner and designer of Modern Marco, did a great job of recognizing the names of Marco’s most famous pioneers in the naming of some of the island’s major thoroughfares — Collier Boulevard and Barfield Drive — as well as streets in the Caxambas area, including Doxsee, Addison, Ludlum, McIlvane, Petitt, Olds, Newell, and others. However, there are important historical figures and groups whose impact on Marco justifies a street being named for them as well.

Alley No. 5, an 1,100-foot stretch of alley located behind Mutual of Omaha Bank and Sunshine Ace Hardware between Barfield Drive and San Marco Road, is set to be named “Weeks Way” for John J. and Elizabeth “Lizzie” Weeks. Born about 1821, John J. Weeks was the first permanent settler of present-day Collier County, arriving in 1862 during the Civil War. He served in both the Second and Third Seminole Wars and was a Union sympathizer living in Confederate Florida and farming during the war to provide

food for the Union Army in Key West.

At age 41, he moved his family to what is now Everglades City, and by 1900, the family, including wife Lizzie and seven children, were farming on the east end of Horr’s Island (called Blue Hill Plantation). John died on Horr’s Island at age 79 and is buried there. Lizzie lived in the area of present-day Collier-Seminole State Park and then for many years in Old Marco. She remarried twice, the last time to Richard (Dick) Sawyer, whose son Preston Sawyer gained fame with his life outlined in the book the “Caxambas Kid.” Lizzie died in 1939 and is buried in the Marco cemetery. John’s brother, Madison Weeks, is acknowledged to be the first year-round settler of Naples. There are a large number of the Weeks family still living in Collier County.

Alley No. 6, a 1,500-foot stretch of alley located behind the Island Garden Center and Walgreens at the corner of San Marco Road and Barfield Drive, would be named “Capt. Horr Way” in honor of Capt. John F. Horr. For decades, the large island to the south of Marco was called Horr’s Island, but this name was

Wrecking crane demolishing the G&G Mercantile Store on Marco Island in March 1965. The owners, Robert and Elva Griffis operated the store from 1936 until July 1964. Courtesy of Collier County Museums

dropped when the island was developed for sale in the 1980’s and re-named Key Marco, taking the name which had been the original name of Old Marco.

Capt. Horr, a Union Civil War veteran, purchased this island by an original patent from the federal government, building his house there in 1877, and today, the remains of the house are on the National Historic Registry. It is an excellent local example of pioneer “tabby mortar” construction. Capt. Horr operated a large pineapple, mango and orange plantation. In 1880, he took the federal census for Marco/Horr’s Island. Between 1889-1893, he was the customs collector for the Key West area and was also the US Marshall for South Florida from 1898 to 1913. He was elected as a delegate to the Republican National Convention and ran unsuccessfully for Florida Secretary of State.

In 1923, he sold the island. The changing of the name leaves no memorial to a man who was a contemporary to the Colliers, Barfields and other outstanding community residents of early Marco. For more information on Captain John Foley Horr, see “The Last Frontier, the story of Collier County” by Charlton Tebeau.

Alley No. 7, a stretch of alley behind the Shops of Marco and an unbuilt lot to the south, is slated to be dubbed “Griffis Way” after prominent Marco residents Robert

A. “Grits” and Elva Barfield Griffis. Elva was the daughter of Tommie and J.M. Barfield, and married Robert Griffis on Aug. 18, 1935, at the Barfield home in Caxambas.

When Mr. Barfield, due to ill health, resigned from the Collier County Board of County Commissioners in December 1942, son-in-law Robert was appointed and later elected as Marco’s County Commissioner and served until 1956. Elva was appointed by Florida Gov. Warren Fuller to fill her mother’s position as a member of the Collier County School Board in 1949, and was subsequently re-elected and served on the school board for many years.

Grits and Elva operated the G & G Mercantile Store in Old Marco which continued the business originally started by Capt. W. D. Collier in 1910. They operated what was called simply “the big store,” being the only grocery and general store on the Island until 1960 when the building was damaged by Hurricane Donna. The Griffis continued to live in Old Marco operating the Islander Motel on Factory Bay (now where the southern part of Riverside Condominiums is located).

With the dawning of Modern Marco in 1965, Elva became involved in new charity and community organizations. For more information, see the books: “Florida’s Last Frontier” and “Island Voices: They came to Marco Island.”

See the Sept. 5 issue of CBN for the final installment of the MIHS’s alley naming proposal.