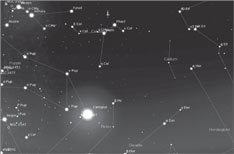 Canopus is the second brightest star in the entire night sky after Sirius, located in the constellation Carina, the keel. It is visible throughout the southern United States but only in Florida does it rise high enough out of the horizon murk to show how bright it truly is. Tonight it will grow still brighter as it rises and crosses the meridian just before 10:00PM.

Canopus is also the star with the greatest intrinsic brightness in our corner of the Galaxy; from 312 light years away it still reaches -0.65 magnitude and is around 13,600 times brighter than the Sun and 65 times its volume. There are no other stars of greater luminosity within 700 light years. The brilliance of Canopus has been put to good use by NASA for interplanetary space probes. Such a bright star located far from the ecliptic is very useful for navigational purposes. Many probes carry equipment designed to “lock” onto the star.

Carina was once part of a much larger constellation called Argo Navis, after the mythical ship Argo. Astronomers found a large constellation in the Milky Way too unwieldy to be useful and broke it apart into several different constellations about two centuries ago. The Milky Way in this region is full of open clusters and nebulas, most notably the Eta Carinae Nebula – rival to Orion’s; but it won’t rise for a few more hours.

Also in view tonight is the more obscure constellation of Columba, created in the late sixteenth century by Petrus Plancius, primarily as a space filler. The constellation is supposed to represent Noah’s dove. There are a couple of modestly interesting things to say about this constellation. It is the solar ant-apex – a location in space the Sun is moving directly away from in its long orbit about the center of the galaxy. Also, the star Mu Columbae appears to be a runaway star from the Orion Nebula – ejected long ago in some sort of violent interaction. This blue star is located just above and a bit to the left of Phact; the small arrow indicates its position. If you are in suburban Marco, you will need binoculars to see it.