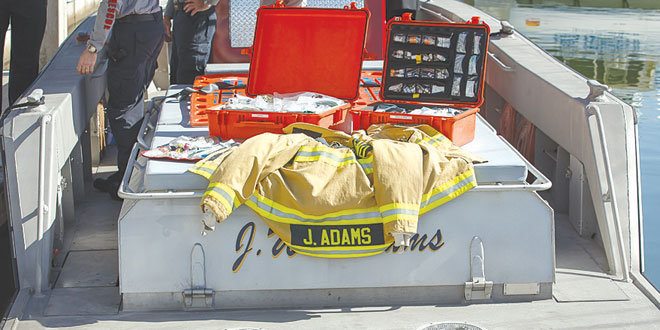 MIFRD’s new fire-rescue vessel is named for 23-year department veteran Jerry Adams, who lost his battle with cancer in February 2012. His gear was placed on the boat during the dedication ceremony.

Marco Island Fire-Rescue Department Chief Michael Murphy could not have asked for a more perfect day. The sun shone. The bay was calm. Boaters were few, and an anxious crowd gathered under the vestibule at the Marco Island Yacht Club for a very special occasion — the christening and dedication of the new Fire-Rescue Boat 50.

“Thank you for coming to what is a very important tradition in the fire service, the ‘wetting down’ of a new fire-rescue boat. It is a solemn service, but it begins a new era in the Marco Island Fire-Rescue Department,” Murphy said to the crowd, which included members of the City Council, new City Manager Roger Herhstadt, Marco Island Police Chief Don Hunter, Collier County Administrator Len Golden Price, representatives from the Florida Fish and Wildlife Conservation Commission, U.S. Coast Guard Auxiliary Flotilla 95, members of the Marco Island Fire-Rescue Foudnation, Emily Roantree from boat manufacturer MetalCraft Marine, Jari Kuivanto of jet

propulsion manufacturer Alamarin-Jet Oy, and members of the MIFRD and MIPD.

The ceremony also included public tours of the vessel and a capabilities demonstration. At full speed — 44 mph — the boat stopped on a dime and with little wake or spray. Its two Alamain-Jet 228 water jet propulsion drives allowed it to make a perfect circle without major maneuvers, and the vessel’s two water cannons shot water nearly over the Jolley Bridge, proving its fire fighting prowess.

The ceremony signified the culmination of MIFRD’s more than three-year journey to secure the new $398,000, state-of-the-art and customized fire-rescue boat boat. For more than a decade, MIFD shared two modified recreational boats with the police department — a Donzi and a Pathfinder. These boats pushed hard to monitor Marco Island’s 100 miles of canals, bring aid to its 6,000 registered boaters, and assist the closest U.S. Coast Guard post in Fort Myers — a minimum 45-minute ride away. They are busy answering between 50-100 emergency water-based calls annually.

City and MIFRD officials perform the ‘Wet Down’ of the J.W. Adams, symbolizing its entry into the fire service.PHOTOS BY FRANK STEIGER

at Station 50 on Elkcam Circle with great fanfare Jan. 15, after being delayed because of winter storms in the Mid-West and New England. It now calls Walker’s Hideaway Marina home. MIFRD officials and fire fighters have spent the last two weeks conducting training exercises and putting the boat through its paces. In fact, MIFRD used the new boat to respond to a boating accident on Keewaydin Island just shortly after arriving.

• an aluminum body with a 10-foot beam and diesel engine that will allow it to pulling close to a burning boat with less risk;

• a FLIR (forward-looking infrared) system for search and rescue calls that sense body heat in the water for up to a mile;

MIFRD Chief Michael Murphy welcomes the crowd of dignitaries and residents to the christening and dedication of Fire Rescue Boat 50.

victim on a backboard for safer entry into the boat; and

After the welcome by City Council Chairman Ken Honecker, Murphy welcomed MetalCraft’s Roantree to the podium for a quick rundown of the boat’s bells, whistles and capabilities. Based in Cape Vincent, NY, MetalCraft Marine furnishes boats for U.S. government agencies, as well as state and local law enforcement agencies and fire-rescue departments all over the country.

He also applauded MetalCraft for their commitment to the project and to quality. “A representative from MetalCraft has been here with us since the boat was delivered,” Murphy noted. “(MetalCraft) is a partner through the long-term.”

The ceremony continued with the raising of the colors, the Pledge of Allegiance and the blessing of the boat by MIFRD Chaplan Ray Munyon. Murphy also told the story about the January 2007 boat fire in the Marco River that inspired the MIFRD to lobby City Council for the new boat. “We lost a life to fire in the Marco 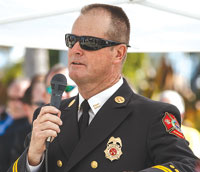 Then, MIFRD Captain Tom Bogan stepped to the podium to unveil the vessel’s name — the J.W. Adams. Bogan spoke of his good friend, Jerry Adams, who served the Marco Island community for 23 years with the department. Adams lost his battle with cancer in February 2012, while still an active member of the MIFRD. Bogan also noted the significance of the length of the boat. At 34.3 feet long, the boat memorializes the 343 fire fighters who were killed during the 9/11 attacks.

With Adams’ gear resting on the back of the boat, two bagpipers from the East Naples Fire-Rescue Department played a tribute. Fire extinguishers in hand, member of the City Council, City Manager Hernstadt and MIFRD officials sprayed the boat down with water to complete the “Wet Down.”

“This boat is a replicate of Jerry,” Bogan said with a smile on his face. “It is kind of ugly but works very, very hard…We miss him terribly…Jerry meant a lot to me, and it is the greatest honor for this boat to be named for him.”