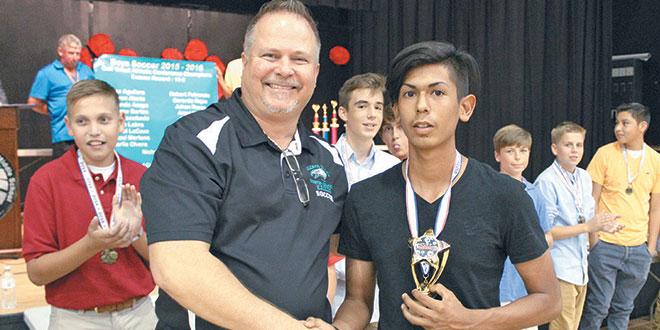 Some 400 relatives and friends packed the MICMS gym. Not only was it the largest crowd, but the highest number of athletes to be recognized.

While many played more than one sport, the number of participants in all sports totaled 271.

Roger Raymond, athletic director, extolled the virtues of all the winners.

“Ryenn works hard at everything she does,” said Raymond, who coached Hart in cross country and track.

“To be good you have to put in the miles like 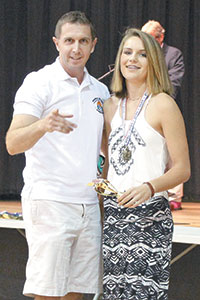 the successful runners that came before her. She does the same in the classroom.”

Hart, who doesn’t seem to realize how outstanding she is, took the low road in acknowledging the award.

“It means a lot, it is very nice to get recognized,” she said.

Hart, who said it will be Lely or Marco Island Academy for high school, expects to only run cross country.

“I really enjoy it and know that I will need to stay focused to do well, she said.

Of Mertens, Raymond said, “He does everything above his age. He is extremely talented academically and in athletics.”

Mertens moved here three years ago from Germany. He said the award “inspires me to continue in sports. It has been a good experience and taught me a lot 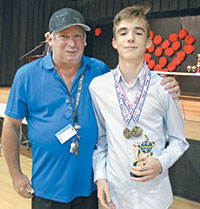 about patience and hard work.”

Raymond said of Faremouth, “She lets her abilities do the talking in almost all cases. She is a fantastic student athlete on the field and in the classroom. I expect her high school career to be outstanding, although trying to decide where to dedicate her energy will be tough. She is very talented in volleyball, soccer and tennis, but also is a fabulous swimmer. She will be a force on the field and a top-notch scholar in the classroom.”

Of Fetzer, Raymond said, “Trent Fetzer was a small boy when he came to MICMS. He was always trying to keep up in cross country races and could easily have become discouraged. He wasn’t in the top 20 when he started here. 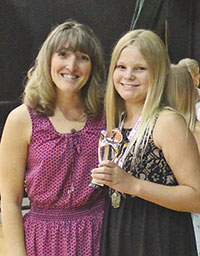 His attitude remained steady as he matured and grew into a tall, outgoing eighth grade young man. He went from a follower to a leader with his work getting him on the team that competed in the state meet and won the GCAC Championship. He works hard in the classroom and almost always has a kind word and a smile on his face.”

Raymond said it is no accident that athletes do well in academics.

“Coaches set the tone by the way they work with student athletes,” he said. “There is a lot of one-on-one and team structure to help them be successful. There are seven new championship banners hanging tonight that came from hard work by coaches and athletes.” 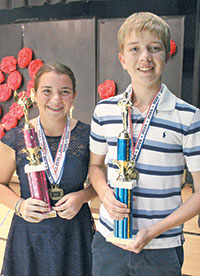 Conference (GCAC), while the girls soccer team did one better, winning the GCAC and the Collier County Athletic Conference.

The magic of the night touched all student athletes as each team member received medals. Each team’s top student athlete also was recognized with trophies.

In boys basketball the top JV member was Mason Ascetta, while the varsity award went to Humberto Trejo.

For volleyball the JV outstanding player was Madison Champeau, while sister McKinley Champeau was named for varsity. The boys varsity tennis recognition went to Hunter Delgado.

In track and field, Michael Mertens and

MICMS was packed and revved for its annual Sports Night.

For cross country it was Ryenn Hart and Johnny Watt.

In soccer Victoria Alvarez and Jose Aguilera took their bows.

Megan Brown was recognized in cheerleading.

In the program it listed the 11 MICMS student athletes who went on to be nominees for the prestigious Winged Foot Scholar-Athlete Award.

This year the nominees are Patrick Michel for Marco Island Academy and Jonathon Irigoyen for Lely High School. All Collier County public and private high schools each nominate one outstanding student athlete. The winner will be announced at the end of May.

For more photos go to www.coastalbreezenews.com.