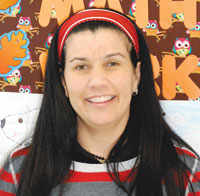 When you walk into her classroom, you know immediately that Iliana San Martin is a special teacher.

The new Marco Island Charter Middle School math teacher decorates the walls of her classroom with posters of Pythagoras (the Greek philosopher who gave us the Pythagorean theorem for triangles) and Eratosthenes (the Greek mathematician who invented geography and first calculated the circumference of the earth), as well as geometric shapes and arithmetic formulas.

At the same time, her students adorn her dry-erase boards with hearts, flowers and messages of appreciation. They tell the world that San Martin is their favorite teacher, that she is amazing and that they love her. It would seem Archimedes (known as the father of mathematics) broke the mold when he created San Martin.

This was evident to MICMS Principal and CEO George Abounader as soon as San Martin’s resume crossed his desk last summer. A graduate of Nova Southeastern University in Fort Lauderdale, San Martin spent the last 12 years working for as a teacher, math coach, department head and math facilitator in public Title 1 high and middle schools — those with high levels of poverty and students at risk for falling behind — in Dade and Broward counties. She also worked as an adjunct mathematics professor at Miami Dade College.

“What impressed me the most was her professional history of achieving success with her students who were in the lower 25th percentile of mathematics, her certification that contained a ‘Gifted Endorsement’ and her bilingual ability,” explains Abounader.

That is why San Martin currently teaches three sixth-grade FCAT remedial math classes along with a regular math class at each of the three grade levels, including pre-Algebra. The state requires middle school students scoring in the lowest 25 percent on the math portion of the FCAT to take two math classes, and San Martin specializes in these students. “I basically focus on the fundamentals of math — addition, subtraction, fractions and word problems,” she says. “I fill in the gaps they are missing in order to get to the sixth-grade level.”

To accomplish this, San Martin uses a cooperative learning model in her classes that she had dubbed “old school vs. new school.” She demonstrates the traditional methods to solve mathematical problems, and then she invites her students to show their own techniques. “The students like to listen to other students… It makes my job easier, and they learn more,” she notes.

There is an amazing unintended consequence to this method of teaching, admits San Martin. The class discussions and interaction between students open up the doors to friendships that might not regularly happen in the chaotic hallways of a middle school, and the kids learn to respect and help each other. They also learn they are not alone in the daily confusion and drama of adolescence.

“My classroom is like a family,” San Martin explains. “When I was in middle school, I hated it. It is not an easy time in life. Now, as a middle school teacher, I teach kids how to survive middle school. I encourage them and try to help them get through it the best way possible… I take time to listen, and I try to teach them to respect and take care of each other.”

San Martin knows first-hand the difference teachers can make in the lives of their students. In fact, she tips her hat to the middle and high school teachers who cared enough to push and guide her through her education, and credits her ninth grade math teacher — Mr. Hoilet — for nurturing her innate love of math and for inspiring to become a teacher.

According to San Martin, she went to a very large public high school in Miami. Mr. Hoilet picked her out of an over-crowded classroom of students ranging in ages from 14 to18, recognizing there was something special about her even then. “I was in a classroom with juniors and seniors, and I felt a little intimidated. He said I was good at math, and he took a lot of time and had a lot of patience. He said if I tried really hard, I could do it,” she adds.

It is a philosophy San Martin hopes she passes on to each of her students, and she uses her unique blend of humor, passion and dedication to propel her students to success both in the classroom and life.