MICMS Students Get Glimpse into the Role of a Legislator 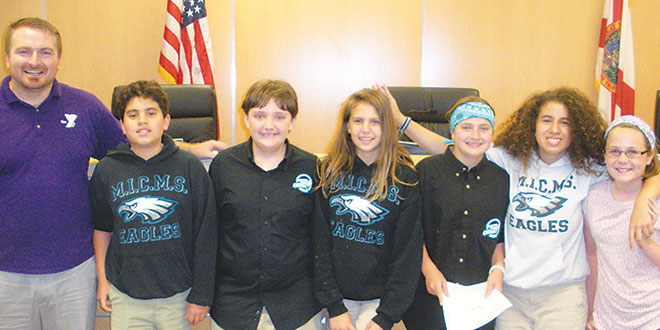 MICMS students participating in the Youth in Government After School Club.

Weighty topics were discussed with suitable gravity, except for the occasional giggle, by the six Marco Island Charter Middle School (MICMS) students seated at the dais in Marco City Council chambers.

They were gathered there as mock legislators, debating self-penned and introduced bills, as part of the Youth in Government After School Club, which is a partnership between MICMS and the Greater Marco Family YMCA.

Held recently, the event was led by Zac Caldwell, Youth in Government program director for SKY Family YMCAs, which has branches in Fort Myers, Bonita Springs, Englewood and Venice. Caldwell also has agreements with the Naples and Marco YMCAs that enable him to operate the program at Tommie Barfield Elementary School and at Barron Collier High School.

Youth in Government is a national YMCA program that provides youths with an in-depth exploration of the workings of the legislative process at the local, state and national level.

“I have a teacher that acts as an advisor to the club,” said Caldwell. “They have weekly or bi-weekly meetings, after school, where the students learn about the legislative process, they learn about writing laws, they interview people in their communities for issues in the community they think they can solve by writing a bill.”

Before an audience comprised of family members, Marco YMCA CEO Cindy Love, Marco City Councilman Victor Rios and interested observers, the youths turned council chambers into the scene of a mock session of the Florida Legislature. Entitled the Marco Island Student Assembly, the students were required to conduct themselves according to proper parliamentary procedure, including using ‘madam’ or ‘mister’ when addressing the chairman.

Each youth took a turn as chairman, and each one also introduced a bill they had researched and written. The simulated proposed legislation covered

After the chairman introduced each bill, its author was allowed one minute for opening remarks, before fielding non-debatable, technical questions from fellow club members. Next came two rounds of pro-and-con debate, followed by a vote.

At the assembly, students serve as representatives or senators, and present bills to their peers, modeling the state legislature.

“Unfortunately, it happened during testing for these students, so they didn’t get to go,” said Caldwell. “So this was our next best option, to get them together to have them work on their bills and then come to this space and do it here.”

Caldwell said he participated in a Youth in Government during high school and middle school in Kentucky, and gained a great deal from the experience. He said youths often don’t understand that government, rather than being burdensome, has a capacity for good, and their participation is essential for achieving the outcomes they desire.

“What I always say is, I think that students, through this, learn that they are agents of their democracy, that they can change things around them, rather than just be victimized by them,” Caldwell added. “And I think that is incredibly powerful. That’s why I’ve connected to it (Youth in Government) so much and that’s why I think this program is so powerful.”