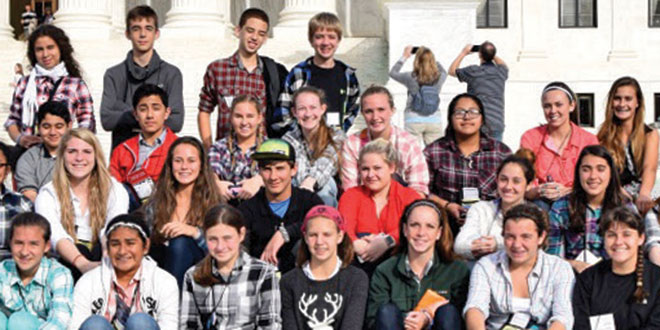 It was a week of wows around every corner when Marco Island Charter Middle School eighth graders and chaperones visited Washington D.C. over the holiday break.

A bus ride to Fort Lauderdale, then a plane trip with a layover, didn’t lower the element of excitement.

Coordinating the trip, for the ninth time, was Joe Jarrett, technology teacher and D.C. Club sponsor. Overall there were 43 students, Jarrett and eight chaperones.

To be eligible for travel club, student qualifications included academic, behavioral and community service standards, along with trip behavioral expectations.

On the very first day they experienced a major surprise as they visited the Arlington Cemetery. “We were just feet away from Justin Trudeau, the Canadian Prime Minister,” Jarrett said. Trudeau placed a wreath at the Canadian Memorial, followed by a 21-cannon salute.

Student Owen Whiting remembers how impressive the ceremony was and how moving it was to stand to see the lines of crosses on graves so perfectly even. He also felt the impact of visiting the Japanese Interment

Memorial. During World War II Japanese families were placed in camps, even though many families served for the U.S. during the war. “They don’t teach that kind of stuff in school,” Whiting said.

All the students savored the history found at the Holocaust Memorial. “We stayed there for more than four hours, causing us to miss a museum,” Jarrett said. “They read everything and watched all the movies, seeing things we don’t teach. They got it. We don’t teach that in history classes.”

The Lincoln Memorial took on special meaning. When they studied Lincoln’s profile it appeared that in Lincoln’s locks was the head of another, Confederate Gen. Robert E. Lee. The Park Services addressed the appearance of Lincoln looking toward the White House while Lee is looking to his home and plantation he once owned in Arlington. The Parks Services said that no such carving was done intentionally and that several visitors claim to find all sorts of profiles within the tufts of Lincoln’s hair.

They also toured the 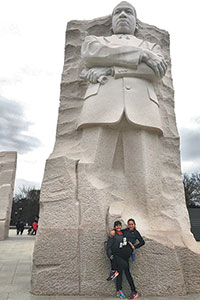 The Newseum was very popular. “It chronicles our history through news events,” Jarrett said. It spelled out 9-11, the Jonestown Massacre, they learned about Patty Hearst and her kidnapping, the Unabomber and saw the largest section of the Berlin Wall that was torn down. “It was the kind of in-depth history you don’t get in school,” Jarrett said.

They enjoyed the Smithsonian’s National Zoo, seeing a baby panda. Student Lauren Shiveler was able to adapt her look to that of a Neanderthal.

The group stayed at the Bethesda Hilton Garden Inn. “Mac Chaudhry (general manager of Marco Hilton Hotel & Spa) made arrangements for us to stay at the Hilton Garden Inn, which was very nice and worked out well for us,” Jarrett said. 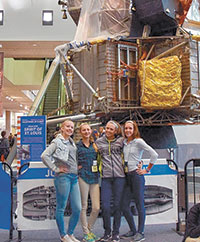 of transportation was the metro. “We took that everywhere, and the kids probably walked eight miles a day,” Jarrett said.

Their days were long. Wake-up call was 5:30 AM and they were on the road by 7 AM, usually getting back to the hotel between 8 and 9 PM.

Jarrett doled out expense money each day. Each student was responsible on how it was used.

“They loved the food trucks along Faragut Square for lunch,” he said. More than 15 trucks lined the square each day. Dinners were mostly at Union Station, housing 15 to 20 restaurants. The final night was dress-up for dinner at the Cheesecake Factory.

Jarrett said that one student put the trip in a special perspective a year ago. “The kid was a bit of a loner when he started out. He came home quite different. The kid said on the bus home, ‘I started out with one friend and came home with 36.’”