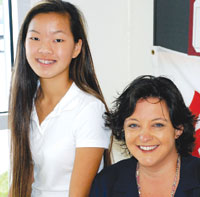 “I am really proud of (Maddie),” says Heidenreich. “We are rated the 20th best middle in the state. I really felt that somebody from (MICMS) should win. I felt in my heart that we had the potential.” In all, 15 essays from MICMS were submitted to the statewide contest.

Hopkins’ essay explored the importance of Margarita Esquiroz to Florida’s growing Hispanic community. An immigrant from Cuba, Esquiroz was the state’s first female Cuban-American judge. She and her family came to Florida in 1962 after Fidel Castro took over her home country. Esquiroz earned a G.E.D. She worked as a legal secretary, while attending Miami Dade College. She earned her Juris Doctorate from the University of Miami.

In her essay, Hopkins wrote that “outside the courtroom (Esquiroz) was very active in the Florida Association for Women Lawyers and the Spanish American League Against Discrimination. She was committed to achieving success for herself, but also showed a dedication to helping others along the way.”

When Heidenreich posed the assignment to her students, Hopkins was not sure what she would write about. “It took me a while,” she remembers. “I did a lot of research online.” Once she stumbled upon Esquiroz, though, she immediately felt a deep connection to her and her story.

Just like Esquiroz, Hopkins wants to be a lawyer and possibly a judge someday. She also is a hard worker, a good student and loves to read. She cares about others as well, helping her mom, Mary Hopkins, buy clothes and school supplies for some of her students at Naples’ Seagate Elementary School where she teaches art.

Most importantly, though, Hopkins also is an immigrant from a country who did not value her or the possibility of her contribution to society. Hopkins mother and father, Tom Bower, adopted her from China when she was about nine months old. Her biological mother put her in an orphanage after she was born. While Chinese cultural traditions value male children over females, the Chinese government also has a strict population control policy known as “the one-child policy.” These two tenets work against parents of baby girls and leave many feeling forced to abandon them.

In her essay, Hopkins wrote of Esquiroz: “Her story is my story. She offers me hope. I came from China with perhaps many of the same dreams she had.”

She continued, “Twelve years ago, I was a Chinese citizen in Guangzhou, China, in a country that offered little hope for me as an orphaned female. But, today, here I am with a goal similar to Margarita Esquiroz. I have the will to succeed and a great big American dream.”

Making that dream will be a bit easier now thanks to the scholarship Hopkins won. The Four-Year Florida College Plan prepays tuition, registration fees and local fees for 60 lower division semester credit hours as well as 60 upper division credit hours at a Florida college.

Hopkins is thankful to Heidenreich for offering her the opportunity to write and submit the essay. She feels it is important to take the time to learn about others and celebrate cultures and those who have left a last footprint in them.