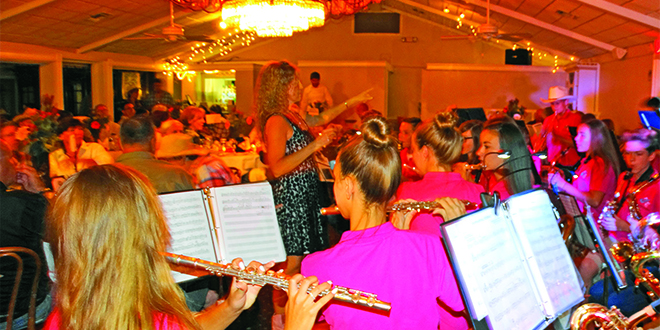 Last Saturday evening the community came out in typical Marco Island fashion to help raise those precious dollars for the children that attend the Marco Island Charter Middle School (MICMS). Dennis and Lisa Meurgue, the owners of the popular Bistro Soleil Restaurant at the historic Old Marco Inn, hosted the 8th Annual Dinner Dance and Silent Auction, which was named Boots and Blues this year. The event is one of the school’s largest fundraisers, and helps to provide the much needed funding for activities not funded by the Collier County School Board.

Charter Schools in the State of Florida are required to raise approximately 10% of their operating budgets themselves. Unlike other schools throughout Collier County, the Marco Island Charter Middle School and the Marco Island Academy receive little if any funding for extracurricular activities, and are forced to apply fees or create fundraisers for the children who wish to participate in those activities. This applies to sports, band or 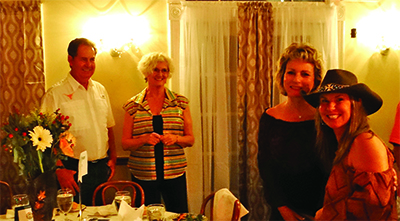 any of the other popular after school activities which make up the “total educational experience” that every parent desires for their children.

Nor do they receive any funding in regards to help with the nutritional needs of students whose parents can’t afford to purchase healthy meals for them. “Believe it or not there are approximately 40% of our students who we fund for those meals,” said Allyson Richards, a member of the school board for the Marco Island Charter Middle School.

Maintenance of the building is another requirement of the local parents, and they have worked diligently to insure the 19-year-old structure is well cared for.

Allyson Richards and Joan Pernice co-chaired the evening’s event, which included cocktails on the deck where many of the island’s notables were present.

Attendees also took advantage of the pre-event time to bid on the ever-popular silent auction items, which were all donated by local merchants to help raise funds. There were a wide variety of items to bid on, 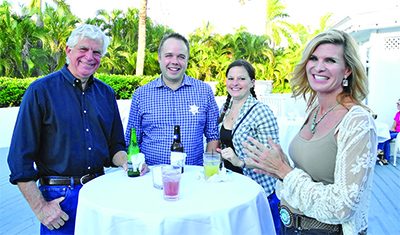 From left: Fred Kramer, Peter Huy and his wife Jenny, and Bonnie Zaikov.

Once seated within the main dining area they were welcomed to the annual event by Tarik Ayasun, chairman of the Marco Island Charter Middle School. He thanked the 160 attendees and those that donated to the event for helping to make it such a continued success.

He introduced the co-chair of the event, Joan Pernice, who acted as hostess for the evening, guiding those in attendance throughout the evening’s activities.

Prior to dinner being served, the group was entertained by the students who make up the Middle School Jazz Band, directed by longtime music teacher Marty Miller. At the conclusion of dinner those in attendance were able to make one last sweep into the silent auction area before enjoying some of Joan Pernice’s hidden talents, auctioneering to raise some additional monies. She managed to auction off special parking spaces in the school parking lot to a number of willing bidders, in addition to many other live auction items.

The organizers were extremely

The centerpieces kept with the Boots and Blues theme of the evening.

pleased with the turnout and results of their efforts to help support the ongoing expenses at the school, in addition to those unfunded mandates not reimbursed by either the state or county.

“We are so grateful to all those that donated items for the auction, those that helped us pull this whole event together and especially to those who came forward and attended the evening’s activities,” said Joan Pernice, who co-chaired the event.

Pernice, who is affectionately called the “Energizer Bunny” by her co-chair Allison Richards has already begun planning a January 27th Casino Night to continue the committee’s efforts to help raise the approximate $240,000 needed to supplement the school’s budget.

The Marco Island Charter Middle School has been ranked as a “High Performing School,” for 18 years of its 19-year existence. This is the highest ranking for charter schools within the State of Florida.

Should residents and businesses wish to explore sponsorship and donation opportunities to support the school they should contact Maria Hayden at haydenma@collierschools.com for more information.