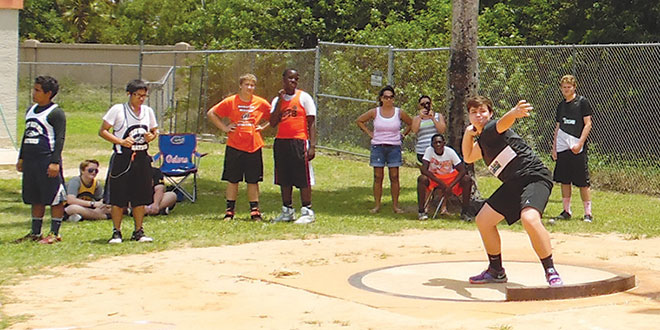 Marco Island Charter Middle School’s Degan Rash, readies to throw in the shot put at the South Division Track and Field qualifying events at Lely High School. Rash was surprised by Gulfview Middle’s Jett Su in suffering his first loss of the season.

The day was sunny and very warm when the South Division Track & Field competition began at Lely High School on Saturday.

The 3200 meter race and the field events begin at 8 AM, with further track competitions beginning at 9 AM.

The South Division qualifiers will meet up 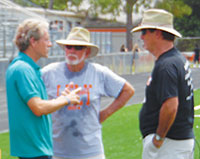 with the top four finishers in each category from the North Division to determine the overall champions.

Leading the way for Marco will be Ryenn Hart, who won the 1600 and 3200 races. She knows she will have tough competition from the North Division in Camille Strackbein of Oak Ridge.

“We have raced twice with each of us winning once,” Hart said. “Each race came down to the last 100 yards.” 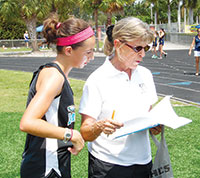 Hart, a seventh grader, and Ellie Poling, a sixth grader, are ready to challenge in the two events. Poling was second in the 3200 and fourth in the 1600 meter runs.

In the shot put, Degan Rash of Marco Island Charter Middle School suffered his first loss of the season, by just one inch. On the last of three tries, Gulfview Middle School’s Jett Su hurled the shot 39-feet-8-inches, exceeding Rash, who threw 39-feet-7-inches.

“I will perform my hardest to win,” Rash said,

Marco Island girls get a quick start in the 1600 meter run on Saturday at the South Division Track & Field qualifying events. Ellie Poling, left and Ryenn Hart, second from left, qualified the top four in each event, and qualified for the Collier County Middle School Track & Field Championships on Saturday at Golden Gate High School. PhotoS by Roger Lalonde

after his surprise defeat. Rash’s longest throw this season has been 40-feet-8-inches.

Sarah Nemeth gave a strong showing in the 800 meter run, placing second with a time of 2:41.3, just two-hundreds of a second behind Emilie Josephson of Palmetto Ridge. Marco’s Lauren Sutherland placed third in the discus.

Marco boys also qualified in the 4×100 event. The team placed fifth, but the fourth-place team was disqualified, giving Marco a chance to compete.