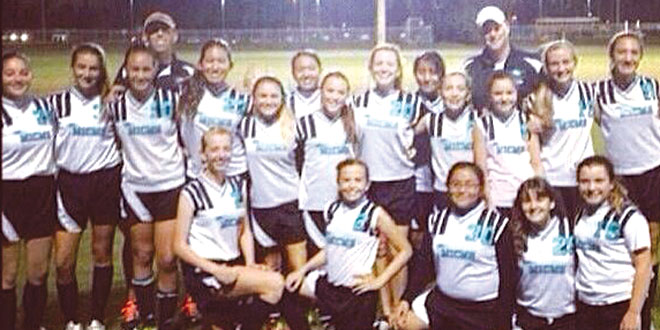 Emily Hamilton scored the first goal of the game in the 20th minute off of a goal kick from goal keeper Andrea Castilo. In the second half, Hailey Carp scored the second goal in the 33rd minute on an assist from Miranda Webb and Emily Hamilton.

With their victory over PRMS, MICMS Eagles won the South Division of the CCAC, and went on to play North Naples Middle School. Both NNMS and MICMS girls soccer teams were undefeated during their regular season. NNMS was able to score an early goal in 12th minute that just rolled in. The MICMS girls played hard with 10 shots on goal to the NNMS’s four shots goals, but in the end, could not punch in.

The MICMS girls soccer team finished allowing only four goals during the entire CCAC season. “We had a strong defense all season long, and great goal keeping by Andrea Castilo. Our girl’s played their heart out, and really came together as a team,” said Coach Patrick Baldwin. “It was a heartbreaking way to end the season; but the team played beyond all of our expectations, and we’re proud of them.”