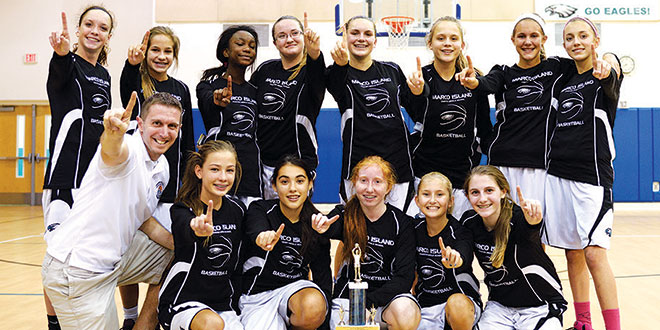 The girls basketball and boys soccer teams won Gulf Coast Athletic Conference (GCAC) championships. The girls’ season mark was 17-2, while the boys went one better at 18-2.

The Lady Eagles were more than up to the task in the GCAC, going undefeated. Their effort resulted in the team earning a championship banner, the first since 2000.

“This team will have their names on a championship banner that will hang in the gym forever,” Grucci said. 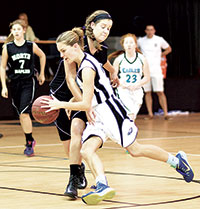 Peighton Grucci gets off a tough shot against North Naples in the Collier CountyAthletic Conference competition.

Two of the Charter Middle School starters played ill. “They had trouble breathing, but still played major minutes, coming up huge against a bigger front line,” Grucci said. “Bottom line is the entire team played their hearts out.”

“Unfortunately we just couldn’t get over the hump,” Grucci said. 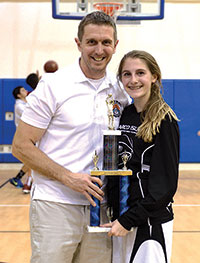 Christian, 3-1, in the GCAC championship game and lost to Oak Ridge in the GCAC semifinals, 2-1.

Coach Joe Bartos said, “This team is one of the most balanced groups that I have ever seen over the last six years of participating in MICMS soccer. Yes, our team had some stars, but everyone contributed this year. Seventeen of 19 players on the roster scored. That just speaks to the balance we had. This is the first year that I was never concerned about putting any of our players on the field.”