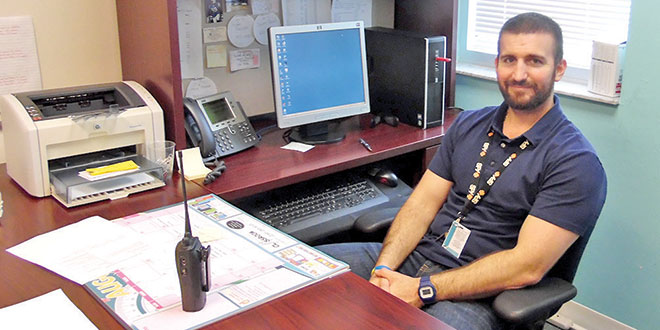 It was 1998 and the school was made up of portable trailers. He played on the team’s first basketball team under Roger Raymond, the school’s first athletic director.

“It’s a bit surreal now,” Shadrick says with a smile. “I can hardly believe that I am taking over for Roger.”

Shadrick became the new athletic director in mid-August when Roger and Karen Raymond announced they were moving to Orlando for family health reasons.

As Raymond was leaving he showed Shadrick a photo of that first team. All the athletes went on to star at Lely High School, with Shadrick playing baseball.

Not only did Shadrick go to classes all three years in the portables, he also had to be at basketball practice at the YMCA at 5:30 AM. It was the only gym at the time.

He was a bit skeptical about the practice start time, but not on what he got out of it. “He (Roger) was a great coach, very intense and 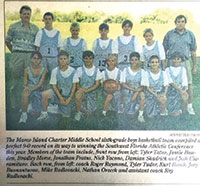 true to the fundamentals,” Shadrick said. “I attribute sports to guidance and leadership in teaching.”

Shadrick went on to get a degree in criminal justice. He intends on going back to school for a masters in educational leadership.

“I wanted to segway into administration and this is a great step in that direction,” he said.

The new job has challenges every day. “I enjoy every challenge, but sometimes you run out of time in a day. Kind of wish I could slow down time,” he said.

Sports scheduling has been done in advance for this year. Shadrick met with Gulf Coast Athletic Conference athletic directors on September 7 to go over next year.

“There will be some tweaking as the year goes on, but it is largely set,” he said.

His wife Ashley is a second grade teacher at Parkside Elementary School in East Naples.

Shadrick has a goal. “I will do my best to follow his legacy,” Shadrick said. “At the end of the school year I want to see that I got through the bumps and hiccups and things continued to run smoothly.”