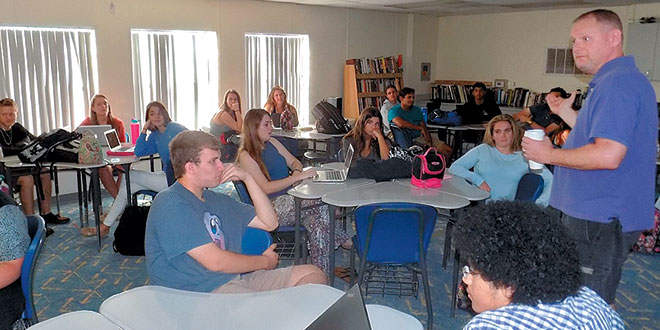 Students get a heavy dose of journalism along with experience on how to publish in Kirby Rients’ Yearbook/Journalism class. Students put together the 2016 MIA yearbook.

Kirby Rients is a much traveled English teacher and has been with Marco Island Academy (MIA) since its inception in 2011.

Although MIA specializes in a STEM (Science, Technology, Engineering, Mathematics) curriculum, the school also thinks it is important that students are well grounded in the humanities.

It didn’t take them long to recognize Rients’ contributions in this area. In 2012, Mr. Rients was given MIA’s prestigious Teacher-of-the-Year award. On March 4th of this year, Rients and two other MIA teachers (who will be separately featured in later editions of Coastal Breeze News) were personally awarded Governor Rick Scott’s Shine Award during the governor’s visit to MIA. This award is presented to educators who have been outstanding in inspiring their students. The nominations come from the teachers’ peers. Rients’ nomination was submitted by Principal Melissa Scott, who notes that Rients has been an educator for thirteen years, and has a master’s degree in secondary education, and undergraduate degrees in English and speech communication. “Kirby has been with MIA since the beginning and has had a pivotal role in our growth and success,” Scott says, “The kids love him. His classes are very popular.”

Kirby Rients grew up in Willmar, Minnesota in the west-central part of the state. He graduated from the University of Minnesota at Marshall in 1996 with a bachelor of science degree in communications. For the next eight years Rients worked for radio stations in Minnesota. He actually had been working at radio stations since the age of fifteen. “Radio was one of the most fun and worst paying jobs ever,” Rients told me, “In 2004, I decided it was time to get into something else.” That something else was teaching language arts courses. Rients considers language arts as the most important subject in school. “I decided that if I became a teacher, I would be an English teacher,” Rients said. He has been as good as his word.

Rients first job was at the Peoria, Arizona Accelerated High School, where, true to his word, during school year 2004-2005, he taught a panoply of language arts courses. While there, he also picked up a master’s degree in secondary teacher education 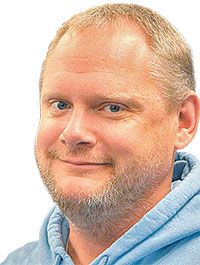 at the University of Phoenix. Both Rients and his wife Shannon are Minnesota natives. They decided to return there in the summer of 2005. While there, Shannon gave birth to three sons, Grayson, 11, Xander, 10 and Quincy, 8. Rients taught in outlying suburban Minneapolis high schools, ending up at a charter school in Otsego. While in Minnesota, Rients took over 100 hours of continuing education courses, focusing, among other things, on guided reading and literature circles to strengthen reading skills.

One of my favorite sayings is, “Even an ill wind blows somebody some good.” In this case, such a wind blew Kirby Rients and his family clear down to Florida. The Kaleidoscope Charter School, in Otsego, as with many charter schools, was having a budget crisis. They began shedding some of the higher earning faculty. “They told me I was over qualified and let me go,” said Rients, “I immediately began asking old associates for letters of recommendation.” One of them had connections with MIA and told Rients he would be a good fit there. Jane Watt and the MIA board agreed. Rients thus became part of the MIA family when it first opened in 2011.

Rients teaches grades 9 through 12, mostly advanced and honors classes, including English IV: College Prep, English III Honors, AICE General Paper, and Journalism: Yearbook. AICE (Advanced International Certificate of Education) is written and overseen by the University of Cambridge in England, ranked as one of the world’s top five universities. As with honors courses, these classes cover more in depth and require individual research and initiative. “The language arts umbrella that covers reading, writing, and communications are skills that all students need now and in the future,” Rients says, “If my students learn a thing or two about English in my classes, that’s great. But if they can walk out of my class a better person than when they entered, then I am doing my job.”

Rients readily admits that his teaching style is unorthodox, but he takes pains to get the students involved and make learning fun for them. “I want students to want to come to my class.” Says Rients, “I don’t want them to look at their schedule and say 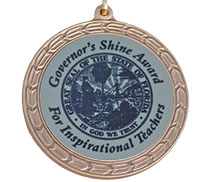 to themselves, ‘Aw crap, it’s time for Rients’ class.’ I want the 90 minutes that I get to spend with my students to be the highlight of every day for them.” The comments of two of Rients’ students are eerily reminiscent of what Rients is trying to accomplish.

Teagan Havemeier is finishing up her freshman year at MIA. She is currently enrolled in Rients’ AICE: General Paper class, where they do a lot of writing – an awful lot. “I’ve never loved English writing really. My penchant has always been for reading, but I’d do just about anything to have another class with him. I have so much respect for that man,” Teagan told me, “Everything about him is truly authentic.” Rients requires them to keep up with current events, including watching NBC Nightly News each evening (in addition to the CNN Student News which is usually played in the classroom). Then, they must write about them. “We start every class with a journal prompt, but it’s not the ditzy ‘What did you do over the weekend?’ kind of writing. He gives us prompts we can form actual opinions on, based off of current events and controversial questions. He’s not afraid to let anyone voice their opinion as long as they can logically back it up, and I think a lot of kids really appreciate that in him. There are always discussions being held, and he never fails to hold a meaningful conversation.” Teagan says that her vocabulary and writing skills have “immensely” improved over the last semester. What impresses her most, however, is that she feels she has become a better person for having taken Rients’ class. “From the very start of the class he told us forget the curriculum,” Tegan said, “He said ‘if you come out of this class a better person, then I have done my job.’” I asked Teagan to rate Mr. Rients. “You can’t put a number on Mr. Rients,” she told me, “There is no grade or scale that could gage just how great a teacher he is.”

colleges of interest offered, decided what they wanted to go into, wrote resumes and college essays, and finally filled out applications. “I was nervous before I took this course, because I didn’t know where I was going or what I was going to do with my life,” Shannon told me, “It really made the whole process fairly simple and not as overwhelming as I had imagined it.” Shannon credits Rients for helping her to make her final choice. She is going with Florida Atlantic. In the Yearbook/Journalism course, Rients picked Shannon as yearbook editor. She had to design it, make sure every student made it in, and delegate authority, assigning different students to be responsible for various pages and sections. “It taught me a leadership role and I’m thankful for the experience,” Shannon says. Shannon finds Rients’ teaching techniques to be extremely effective in gaining and holding the attention of his students. “He uses his humor and quick wit to relate to the students and grab their attention, but teach them something along the way. He connects with every student he meets,” says Shannon, “I say he is a 10/10. If he was a hotel he would be rated five stars! Best teacher I’ve ever had!”

Kirby Rients will be leaving MIA at the end of this school year. His wife has a chance to move up in the hierarchy of Wells Fargo Bank and this necessitates a move back to Minnesota to one of their major hubs. Kirby is supportive of this and tells me that it will be a good move for his family as his sons, two of whom are autistic, “will be closer to their grandparents, cousins, aunts and uncles and other family that are in Minnesota.” Kirby is putting a good face on this, but I can tell that it will be a wrenching move for him. “I never wanted to leave [MIA].” Kirby told me, “I wanted this to be my last teaching gig. This has been the best school that I have ever been a part of.”

Next year, when the wind is out of the northwest, I will be cocking my ear toward Minnesota, listening for the laughter, and perhaps cheers, from another of Kirby Rients’ English classes.