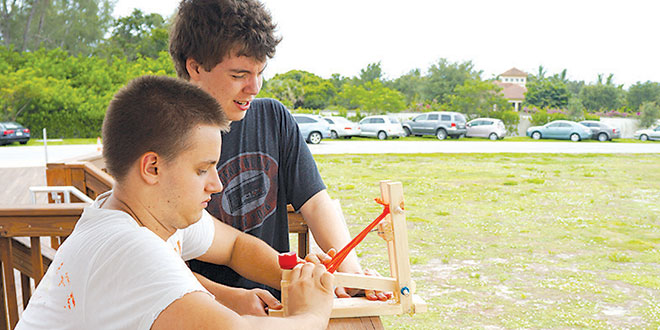 Taught by Hal Creech, the engineering class is just one of the many STEM classes students at MIA are offered each semester. The final assignment was to design, plan and create a mechanical, electronic or programming project from what they had learned. Creech told the students to “show me you learned something, and show me you can plan and create a project.”

The students, made up teams of two and three, created unique projects. Some found inspiration from everyday objects, like 11th graders Cameron Ragan, Omar Rodriguez and Matt Nugent. Cameron’s old truck horn was powered by an Arduino board and an air compressor. It sounded eerily like a train. On the last 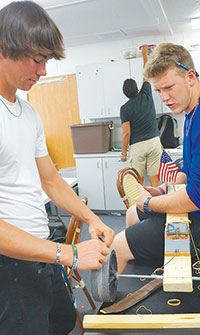 day of school it will ring in place of the traditional bell.

A few looked to history for mechanical blueprints. Tenth graders Kalli Jacobs and Ben Nguyen built a ballista, a realistic and working replica of an ancient Roman missile launcher. Aidan Kahn and Max Ruffatt created a wooden catapult, which was able to launch objects up to 100 feet.

Others created programming masterpieces, such as Kyle Ginther, Shane Kelley and Austin Estemera, who built an “Arduino Revolution Counter.” The students wrote the code to create a sensor that can “see” the difference between black and white, in order to count the revolutions of a spinning black and white magnet, and report the results on an LCD display.