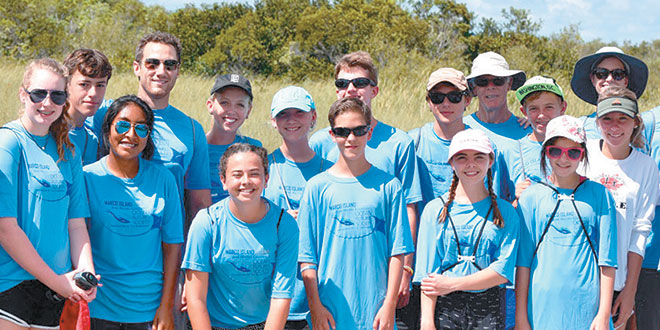 AOTE campers pose at Shark Valley Park in the heart of the Everglades.Noted as one of the Everglades’ most remote visitors’ centers, it is70 miles east of Naples. Undaunted, these guys seem none the worse forwear.

On Monday, June 20, MIA kicked off its third annual 5 day Ambassadors of the Environment Camp (AOTE camp). It is devoted to acquainting students with our surrounding natural environment and suggesting ways to sustain it. Students toured all the surrounding parks and sanctuaries led by the spritely and well-traveled 74 year old Richard C. Murphy, Ph.D., Director of Education and Science for the internationally acclaimed Ocean Futures Society (OFS). Murph, as he likes to be called, started coming to MIA three years ago because of its commitment to environmental studies and the passion of its chairman, Jane Watt. “[Watt] contacted Ocean Futures a few years ago to see if we would be interested in helping MIA to develop innovative science based programs for students and the community,” Dr. Murphy said. Before agreeing to come out from his Santa Cruz California home, Murphy did a little research and was particularly impressed with Watt’s tenacity in gaining a charter for MIA. “Creating the Academy has been a herculean effort that few people would have stuck with,” Murphy said, “I felt that here was a person I could depend on to throw her full support to

On the second day, Campers and staff paddle their kayaks into Rookery Bay. The weather was glorious on this day as it was for most of the week.

From the beginning, Watt had always intended and hoped that MIA would be committed to educating and alerting the students to the importance of the environment and our relationship to it.  When applying for MIA’s Charter in 2010, Watt, in an appearance before the Collier County School Board (CCSB), told them that environmental studies would be a significant part of the MIA curriculum.  “[Our students] will be immersed in relevant projects related to the environment and outdoors,” she said, “Global environmental lessons will come to life. Students will become stewards of the natural environment.” These goals were memorialized in the Charter itself.  Watt got her Charter in November 2010, and MIA opened for business in August 2011. Jane Watt, the School Founder, now became Board Chairman for MIA. In the early years MIA was beset with immense financial challenges and growing pains. (It still is.)Watt was working 24-7 dealing with these problems. A large part of every day was devoted to raising money for the school. Throughout all this, Watt never gave up on her dream of sending the students out into the world environmentally knowledgeable and motivated. Environmental and Marine Science courses were added 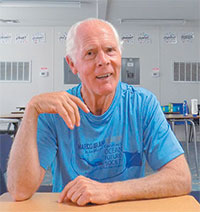 Photos by Barry GwinnEven after an all-nighter with staff and students, “Murph” never loseshis enthusiasm in his attempts to educate the world about our deteriorating environment.

to the curriculum. Then in 2014 she landed the big one.

Many of us grew up watching “The Undersea World of Jacques Cousteau” and later, “The Cousteau Odyssey” in the 60’s and 70’s. These gripping undersea scenes ran for 15 years on ABC and NBC and were mesmerizing to see. Cousteau became an international sensation and a household name. In 1979, Cousteau’s eldest son Jean-Michel Cousteau, began working with and collaborating with his father. Since that time Jean-Michel has produced over 80 films, received the Emmy, the Peabody Award, the 7 d’Or, and the Cable Ace Award. In 1989, he became a syndicated columnist for the Los Angeles Times where his articles appeared in over sixty newspapers worldwide. After his father’s death in 1997, Jean-Michel, founded the Ocean Futures Society (OFS), a nonprofit marine conservation and education organization. An on line posting describes it as “A Voice for the Ocean” and describes Jean-Michel as “an impassioned diplomat, reaching out to the public and honoring his father’s heritage to carry on this pioneering work.” Dr. Murphy has been OFS’s Director of Education and Science since its inception. For years before

that, he has traveled the world with, Jean-Michel. These then are the people, and this is the organization that Chairman Watt convinced to come out to tiny but high performing Marco Island Academy (235 students). When she sets her mind to something, it usually happens.

After three years of working with MIA, Dr. Murphy has no regrets. “[MIA] has progressed in broadening and deepening the [environmental]  curriculum,” he told me, “I feel that the time Ocean Futures has dedicated to the Academy is a good investment.” As a matter of fact, according to Dr. Murphy, it is the only such investment that OFS has made with any school – anywhere in the world. “OFS has no other collaborative partnerships with schools,” Murphy emphasized, “The reason is that most schools are so mired in a rigid curriculum and narrow thinking. The greatest challenge our species has ever faced is generally ignored in the academic system. Many college graduates do not understand how the planet works.” Dr. Murphy’s idea is for an environmental component to be made a part of every major in addition to specific environmental courses to give students an understanding of how the planet works and

challenges to its health. “You must believe something has value to want to protect it,” Murphy exclaims, warming to the subject, “And you must understand something to protect and manage it.” In MIA, Dr. Murphy sees the best opportunity to infuse these concepts into a school curriculum. With the five-day summer camp as a successful start, he plans to continue expanding his collaboration with MIA

That is why up to now all of the Ambassador programs involve only field study, outside the classroom. It is what has made MIA so unique in the eyes of OFS. Over the last three years, with Dr. Murphy’s encouragement and counsel, MIA has steadily increased its commitment to environmental studies. It now offers a menu of courses, which Murphy describes as solid. What has been missing, he says, is an educational leader in MIA who will be focused on environmental education. He feels that it now has that leader, having hired Science Teacher, Jerry Miller to fulfill that role. Miller, who was hired last August, along with Chairman Jane Watt, Assistant Principal Amber Prange, and student 3rd year camper, Olivia Watt, pretty much ran the camp this year. Miller will take

Before embarking on kayaks to see for themselves, a Rookery BayRanger explains the importance of the Reserve. The Rookery Bay National Reserve is said to be oneof the few undisturbed mangrove estuaries in North America.

this on next year. Both Watt and Miller are sold on the concept of infusing environmental concepts into as many of their other core courses as possible. “For instance,” Watt posits, “If we needed a cost based analysis on solar panels, we would have our math department work on this.”

Watt may finally be getting her chance to put in place a green building on a green campus as she proposed to the School Board six years ago. John Szerdi, an architect with Living Designs Group of Lake Worth, Florida has drawn up plans and an architectural rendering of a possible permanent building on MIA’s San Marco Road campus. Szerdi specializes in the  incorporation of water systems into green building projects. Dr. Murphy invited him to speak to the students on the last day of camp. As Szerdi showed slides and explained how the new building would help to sustain the environment, the students’ enthusiasm was palpable. They were eager to respond with ideas of their own. Dr. Murphy could only be described as euphoric at the entry of John Szerdi into the equation. Now, he could visualize the entire campus as being an environmental teaching tool.

Photos by Tish ChampagneAOTE Campers and Staff pose at MIA’s main entrance at beginning of camp. The entrance is named for Rene and Tish Champagne, who donated the money for its construction. Tish accompanied the campers, chronicling their forays on her camera. This one of many pictures she took.

16 students attending the camp came from Marco Island, Alabama, California, Georgia, Ohio, Germany and Sweden. Word about this one of a kind opportunity is spreading fast. All the kids wished the camp could have lasted longer. All made written pledges as to what they would do to help sustain the environment. The logistics of this camp were expensive. Money had to be raised for scholarships and the considerable expenses involved. MIA gets no public funding for much of what it does. MIA had shirts made for all participants which proudly list the sponsors who had made this camp possible. These AOTE sponsors are among the many here who believe in what MIA is doing. Peaches and Bruce Conley; Marco Island Marriott Beach Resort and Spa; Rob and Donna Reilly; Gene and Mary Sarazen Foundation; and Ginny Bertram all made major contributions.

Every journey starts with a single step. This one started with a one week summer camp. It is Murph’s hope that these pioneering efforts by MIA will become the model for other schools, colleges, and grad schools. Murph has finally succeeded in planting  a seed in academia. It has fallen on fertile ground which he and Jane Watt will continue to nourish.