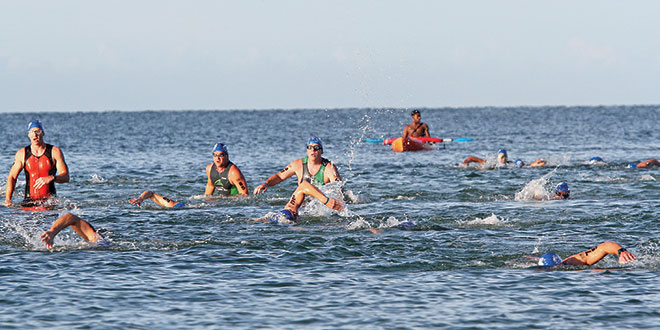 Competitors in the swimming leg of the Marco Island Triathlon.

Mild temperatures and a pleasant breeze greeted 374 participants in the sixth annual Marco Island Triathlon the morning of October 2, at the Marriott’s Marco Beach Resort.

Vladimir Casanova of Miami blitzed the field, finishing a full 48 seconds in front of second place finisher Ross Lenehan of Cape Coral. Kayla Schmidt of Bonita Springs outdistanced the female competition, winning her first triathlon by 59 seconds over runner-up Sue Fleming, also of Bonita Springs. The mixed-team relay was won by Jo Muller and Lee Bassel of Naples, who raced as Bassel Builders. They finished 2:26 ahead of runner-up Chasing Cars. Marco Island’s Paul Strong was the top finisher in the Male 50-54 division and finished ninth overall.

Casanova, who has won numerous triathlons across the

“It was actually my very first triathlon,” Casanova said. “I liked it so much that I kept doing it. Here I am five years later. This is the first time I’ve won this race.”

“I usually win all of the races I do throughout the year,” Casanova said. “But this race is pretty hard. There are a lot of good athletes in this area. Young athletes. I’m 40, they’re in their 20s, so it’s hard to beat them.”

Casanova has lived in the U.S. since 1999 when he won the visa lottery and left his native Cuba.

Schmidt is also a transplant, moving 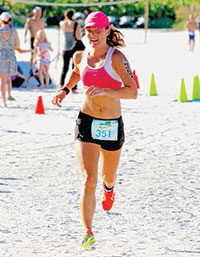 Jo Muller crosses the finish line in themixed relay competition of the Marco Island Triathlon. Muller did the running and swimming legs for the winning team.

to Naples from Minnetonka, Minnesota five years ago. She enjoyed winning in just the second triathlon she’s ever participated in.

“The sand stinks,” Schmidt said playfully. “The bike route was awesome,” she said, “but running in the sand wasn’t all that fun. But at least it was somewhat hard-packed. But we’re in Florida so they make us run in the sand.”

Muller, who handled the running and swimming legs in the mixed relay competition, was quick to deflect the credit to teammate Bassel. “It was because he did the most amazing bike,” Muller said.

Event organizer Linda Gregory, who led the triathlon since its inception, was happy with the outcome. “It was a pretty good turnout this year, we had a little bit more than last year,” she said.