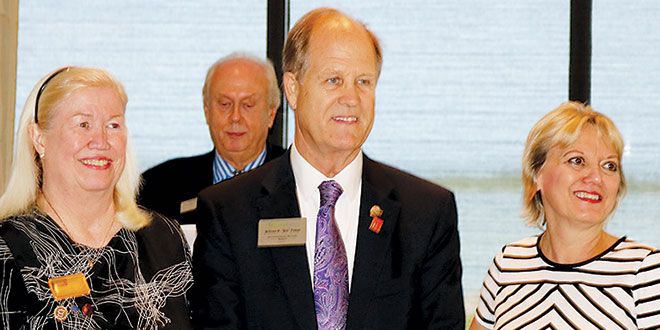 The Marco Island Area Association of Realtors® held a membership meeting on May 19 at Hideaway Beach Club, which included some special guests of honor.

Susan Ackerson, President, opened the meeting and welcomed the guests:

Ron Webster, Law Offices of Ronald S. Webster, introduced the RSN members in attendance. RSN stands for “Realtors® Support Network,” and are a group of professionals that support our local Realtors® in their daily activities. 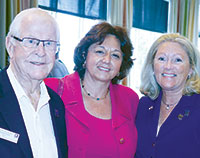 then introduced the members who have invested in the Realtors® Political Action Committee (RPAC) at various levels. A raffle was held for a 60-inch TV, and was based on participation level. Mike McCarty was the winner.

Bill Morris, Law Offices of William G. Morris, was introduced as the platinum sponsor for this year. Morris came to Marco Island in 1983, and was able to establish a strong relationship with clients to handle real estate closings and other legal matters. 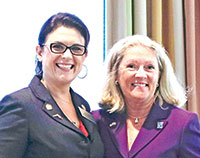 McGilvray introduced Representative Kathleen Passidomo to the group. Passidomo was to give a legislative update, but instead, talked about shutting the doors early for the legislative session.

Following Passidomo, Jack Greacen gave an update on legislation and issues relating to the realty industry. “We’ve had a very unique year as far as the legislative session is concerned,” said Greacen. Amendment 1 and the Low Income Pool were among the top issues. The estoppel certificate was also of great interest to attendees, and Greacen was able to provide updates as to legislation regarding all these issues. “You guys have some

things coming down the pipeline,” Greacen added. “As of August 1, you all are going to live in a very new world as far as housing sales are going to be concerned.” Greacen is lobbying federal agencies to give Realtors® a chance to work into the new system.

Steve Josselyn addressed the group at the end of the meeting regarding the current rental ordinance issues on Marco Island, which prompted many questions and comments.

The realty business is a complicated world, and Marco Island has some great professionals that want to keep this a special place for all those wanting to purchase property here.