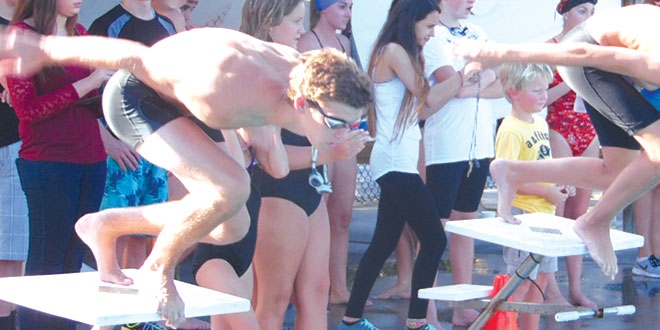 Alexander Berg is ready to charge into the water for his first 50 freestyle event as a member of the first Marco Island Academy swim team. photoS By Roger Lalonde

Marco Island Academy’s swim team hosted its first-ever swim meet on Oct. 9. Although few in numbers — four girls and one boy — they did well under coach Kamal Farhat at the Marco YMCA Miss Dottie Pool.

Alexander Berg, a freshman, is not only new to the swim team, but Marco Island. Berg came here from Helsingborg, Sweden the week before school started and is adjusting to school and swimming. He competed in the 50-yard freestyle, coming in second in his heat.

“I was nervous, I just tried to do my best,” he said. He is using swimming to get in shape for baseball and tennis, although he said, “I want to be ready for swimming next year.”

Farhat said Berg has a swimmer’s body, already around 6-feet-two at 14 years old. “If he keeps swimming he has potential,” Farhat said. “Like I have said to others with potential, ‘I can make you a swimmer if you want to.’”

The girls want to. They warmed up with a second in the 200 medley relay, then won the 200 freestyle relay. Individually, 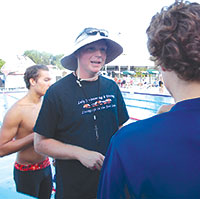 Faremouth won the 200 and the 500 freestyles. Cottage-Ramnick raced to first in the 200 IM and 100 breaststroke. Lenhoff won the 100 freestyle and raced to second in the 100 backstroke.

A senior, Lenhoff said she has been pushing for a swim team since her freshman year. “It is nice to be a senior and doing great things with the team,” she said.

Farhat is very serious about his girls’ potential. “We can’t win meets, but they understand they have a tremendous opportunity,” he said. “I think a couple of them could go to state. They need to pay attention to the details demanded in swimming that make you fast.”

Lely coach Adam Peterson saw both his teams win. “The teams are doing a great job on the year,” he said. “They seem to be hitting their stride right before districts, which is always the goal of the swimmers to go their best times at the end of the year.”

Lely has many new swimmers that are improving each meet and the veterans are getting ready for districts. “At tonight’s meet we had many personal bests which bodes well for the team,” he said.

Lely will be looking forward to sending some swimmers to the regional meet. “Look for Lucca Delcompare, Andrew Smith, 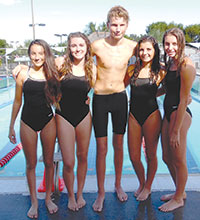 and Hunter Angersbach on the boys side and for the girls Emily Holten, Grace Anne Delcompare, and Madison Bonfitto to make waves at districts and move onto regionals, along with some relays,” he said.

Peterson’s assistant is Ling Su, who was on a Lely record-breaking team with Marco Island’s Wesley Blassneck and Louisa and Mercedes Farhat. They still hold a number of team and individual records from the 2008 season. “It’s different being on the coaching side, but the kids are awesome,” she said. “It’s interesting that the (Marco) swimming community is still here.”

Lely’s Greg Andres may have had the largest cheering team. Andres, 265 pounds, competed in his first-ever event, the 100-yard butterfly. “At the 75-yard mark I could barely breathe, but I felt like the whole team was cheering me on, and it gave me energy to finish,” he said.

At the meet was 9-year-old Caelen Burt, the next MIA star in waiting. “I started swimming at 7, and it is fun,” she said. “I like coach Kamal (her swim team coach), and it is awesome to think about going to high school here.”

If she keeps going it will be awesome for MIA. Burt currently has the second best time for her age group in the 50 freestyle in the country at 30.41 seconds.