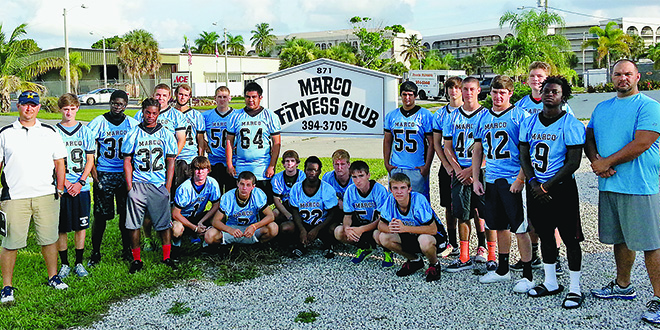 Submitted Photos:Coach Greg Fowler with his 2014 MIA football team, in what became a successful, long-standing collaboration between MIA and the MarcoFitness Club.

Bob Cholka has done a lot of things in his life, but none has been more gratifying than his fitness club on Marco Island This guy has tried his hand at everything from deputy sheriff to an IT guy with large corporations. Bob grew up in Milwaukee, married his high school sweetheart, and had two children, both of whom live and work here. He was a deputy sheriff for the Milwaukee County SO for eight years and later moved to Chicago, where he worked in the IT departments of Kemper Insurance and Ameritech. He started visiting Marco Island in 2000, after hearing friends rave about it, and quickly fell in love with the place. Cholka bought a place on Marco Island in 2004 and moved down here permanently from San Francisco in 2009. His wife had a consulting business there and Cholka had taken early retirement. Soon he had the itch to get involved in something else. “I was a certified strength and condition coach,” Cholka recalled, “The palms and sunshine of Florida was beckoning. Jean and I wanted to move there permanently someday. I started googling fitness centers in the Marco area and the Marco Fitness Club popped up. It seemed to be just what I was looking for. We jumped at it.” The club at 871 Elkcam Circle had been run by Burt and Jan Brewer since 1981. Burt had died and Jan Brewer was looking to sell the business. Kyle, Cholka’s son, who was living in the Marco house, set things up. Bob and Jean moved back here and closed the deal in September 2009. A personal training center at 860 Bald Eagle Drive was added to the business in 2013. Bob and Jean Cholka are partners in the business. Kyle, 30, a massage therapist, helps out with the 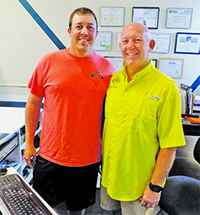 business, and daughter Kristen, 36, is a pediatric RN at NCH on Immokalee Road. Cholka has upgraded the fitness club and added new equipment each year. His business has prospered. And then, in 2011, Marco Island Academy (MIA) opened its doors, and in 2012, MIA fielded its first football team.

Andrew Delgado was MIA’s first football and baseball coach. It was not long before he dropped in to see Cholka. “[Because MIA had no facilities for weight training], he was trying to find a place that would accept his kids for workouts and wasn’t having any luck,” said Cholka, “He said that no one was anxious to have a bunch of kids mixed in with their regular customers.” Delgado told Cholka that initially, only four or five kids would be coming in, as there were few who had come out for football. Delgado intimated that MIA would sign a written agreement, which would involve some sort of payment schedule to the fitness club. In anticipation, Cholka began letting the kids in, but the agreement never materialized. In 2014, MIA’s second football coach, Greg Fowler, came by with a much bigger proposition. He had been looking around for a place which would accommodate the MIA football team for regular workouts. (The team had grown to 25 players by then.) Fowler said he had found Cholka’s fitness club to be the perfect place for his team’s workouts. Athletic Director Roger Raymond later visited and liked what he saw, giving approval to the plan. “This would require a much bigger commitment of club facilities,” said Cholka, “No mention was made of any payments from MIA, nor of any written agreement. I realized that neither was going to happen, but I was so ingrained with the kids coming in, that I couldn’t say no.”

At first, it was just the 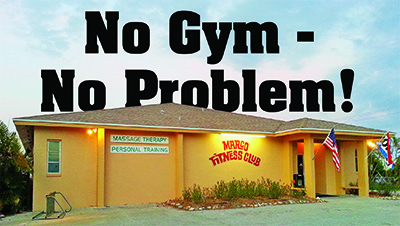 football team, but has since been extended to MIA’s entire student body. There are currently 160 MIA students (out of a current enrollment of 230) in the system, using the club for workouts. They are all admitted free of charge. “For the most part, my regular customers like seeing the kids around, and are able to work around them” Cholka says, “They are well behaved but they do add a degree of youthful boisterousness, which livens the place up. Sometimes, the football team takes over the whole club.” Students interested in using the facility must fill out registration forms, and then provide student ID when coming in. They are welcome any time the club is open. The football team comes in for regular sessions during the summer and then individually during the season. The cross country and soccer teams come in to use the treadmills when weather precludes outdoor practice. “A lot of the coaches aren’t aware of what we are offering here,” says Cholka. Coach Fowler originated regular PE classes, which convene at the club four days a week at 2 PM – the last period in the day. It is an accredited class. Current head football coach, Damon Coiro, leads the class this year. He has added calisthenics, and has created a structured environment, conducting drills and exercises. He even has the classes running around the outside of the building, Cholka says.

Cholka has progressed from skepticism to an appreciation of how the kids handle their privileges at the club. “The kids are disciplined, courteous and respectful,” he says, “They know the rules as to what they can and can’t do. People ask them how they did in games. It gets kind of like ‘Cheers’ in here. For students that age, they are super kids. That’s why they’re still here.”