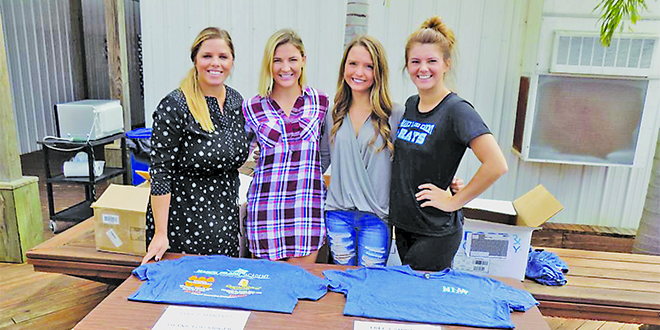 Marco Island Academy’s 230 students eat lunch in two shifts, beginning at 11:30 AM. They bring their own lunches and congregate on the Champagne Pavilion, named for benefactors, Rene and Tish Champagne. With rock music, blaring from the PA system, it vaguely recalls the school cafeterias many of us were used to – only on steroids. After a challenging morning of classes in one of the nation’s most challenging schools (as recently reported in the Washington Post), these kids are ready for a break. On Thursday, October 20, they got more than they bargained for. Athletic Director, Kelly Monnot, and three girls from the student leadership council, were selling t-shirts at one side of the pavilion. Or were they? Although the event had been announced beforehand, some students didn’t get the word. Students sometimes feel they are nickel-and-dimed to death at school, and seemed wary of having to pay for one more item or activity. Nevertheless, a few students began to trickle to the 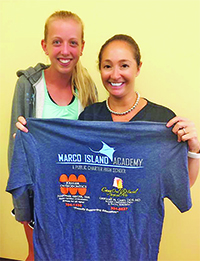 Submitted Photo: Olivia Watt and Dr. Maryann Kriger displayone of the shirts handed out to MIA students,free of charge, thanks to a gift from Dr. Kriger.

table where the shirts were on display. Soon, exclamations of “They’re free!” were heard throughout the pavilion. The trickle turned to an avalanche. To avoid the rush, some of the tables sent up one person to scoop up shirts for the others. The shirts flew out of the boxes and into the students’ hands. “These shirts are half polyester and half cotton,” said Abby Neal, one of the students handing them out, “They are really soft.” The shirts, a charcoal blue/grey, sport the distinctive MIA logo on the front – a blue manta ray swimming through the “A” of MIA. Kelly Monnot and MIA Chairman Jane Watt worked with the designer on the logo. “We ordered 340 of these shirts,” said Monnot, “What we don’t hand out at lunch today will be given to staff, with the remainder probably going on sale.”

The shirts were donated to the school by Marco Island orthodontist, Dr. Maryann Kriger and her husband Dr. Gregory M. Casey, a maxillofacial and facial 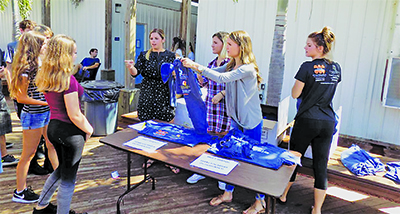 Photos by Barry Gwinn: Students gather to get a free shirt.

plastic surgeon. “Dr. Kriger has donated to the school on a regular basis since the school opened,” Watt said, “The funds from a recent $5,000 donation were used to purchase t-shirts for all students; the balance will be applied to the Annual Fund.” Doctors Kriger and Casey live in Bonita Springs, where they have offices (since 2007) and are raising a family. In 2009, they opened up an office on Marco Island and fell in love with the place. “Dr. Casey and I have always supported education and children youth programs,” says Dr. Kriger, “I really became interested in MIA when I met Jane Watt. She has inspired me to support [the school]. I feel that she values education as much as I do.” Dr. Kriger also took a hand in designing the shirts. “The t-shirts were just a fun project,” she says, “I really wanted the kids to have school spirit. When Jane reached out that they needed t-shirts for the school, we jumped in and supported the effort.”