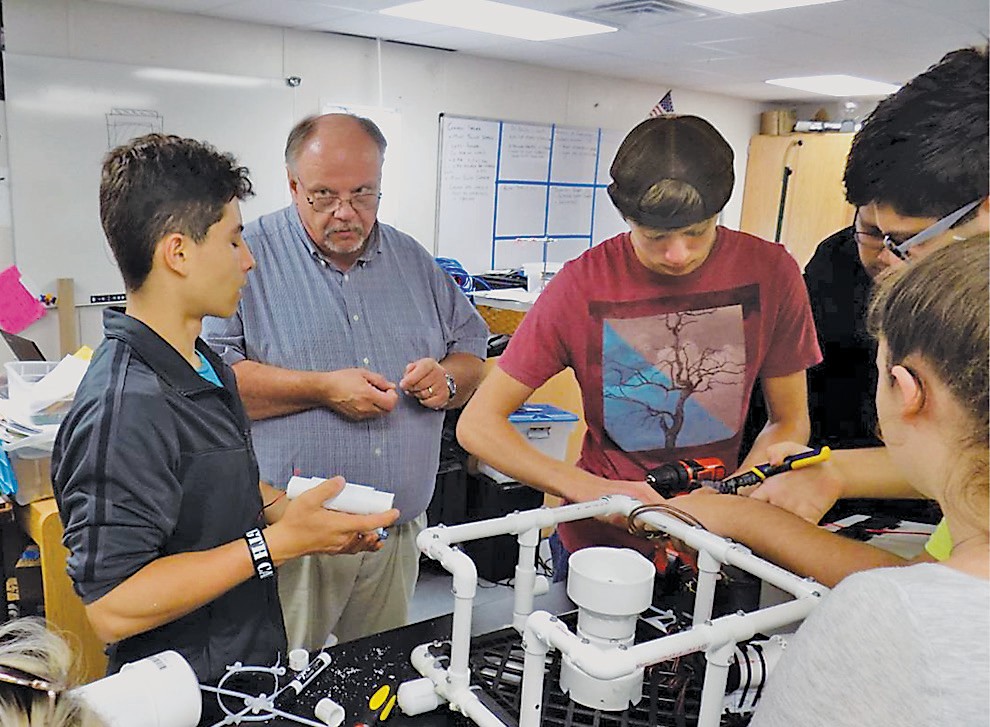 I asked Mr. Wood to get up from his desk and wander around the room in supervisory mode. He obliged although steadfastly maintaining that most of the time, the kids need little supervision. “Our objective is to have them take and complete the responsibility themselves.” Wood said, “Tests have shown they’re a lot happier that way.” Photos by Barry Gwinn

This winter, Frank Wood has gotten a second wind and hit his stride. His classroom is filling up with additional equipment and a lot more shelving to put it on. His engineering students never look at the clock during class, except to make sure they have enough time to complete what they are doing. Imagine that; the clock is their enemy.

Wood was brought to Marco Island Academy (MIA) last summer in hopes that he would invigorate the STEM (Science, Technology, Engineering and Math) curriculum. By all accounts he is exceeding expectations. This curriculum is mentioned in MIA’s mission statement, and is one of Board Chairman Jane Watt’s primary reasons for founding MIA back in 2011. Watt is convinced that a solid grounding in STEM will best prepare the students for leadership positions in the technologies and sciences which will determine our future. Looks like she found the right guy. Some of these kids will certainly make their mark someday, but right now, they are having a roaring good time getting there. 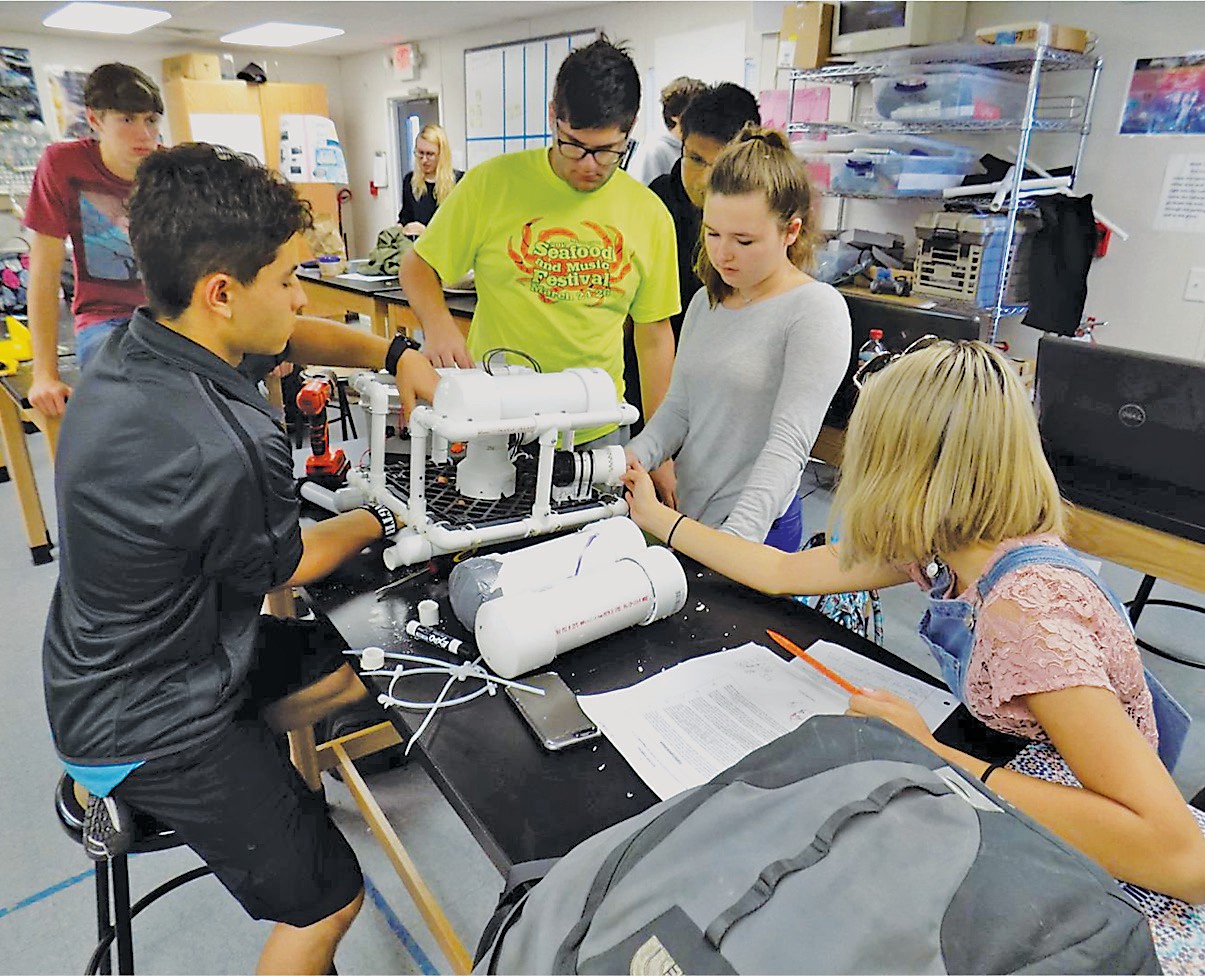 kinds of stuff – from bridges to remote controlled ball tossers. In February, Wood figured they were ready for the big time. What cinched it for Wood was a class bridge building contest on February 9, in which the winning bridge supported 27.5 pounds of weight on a one-ounce frame of balsa wood. The students came up with a radical design change that surprised everyone. (See “MIA Bridge Building Competition,” Coastal Breeze News, 3/3/17 @coastalbreezenews.com) Just 13 days later, he entered his class in a statewide underwater robot competition. The students were to build the robots from scratch and had only 43 days to do it.

The competition, to be held at St. Petersburg on April 8, was sponsored by the Marine Advanced Technological Education Center (MATE), with headquarters in Monterey, California. Operating with the help of grants from the National Science Foundation (NSF), MATE has been sponsoring competitions like this for the past 12 years. NSF is serious about the development of American high school students majoring in STEM subjects and believes that MATE can help them do this, particularly in the field of underwater robotics.

MIA’s administration was all for this 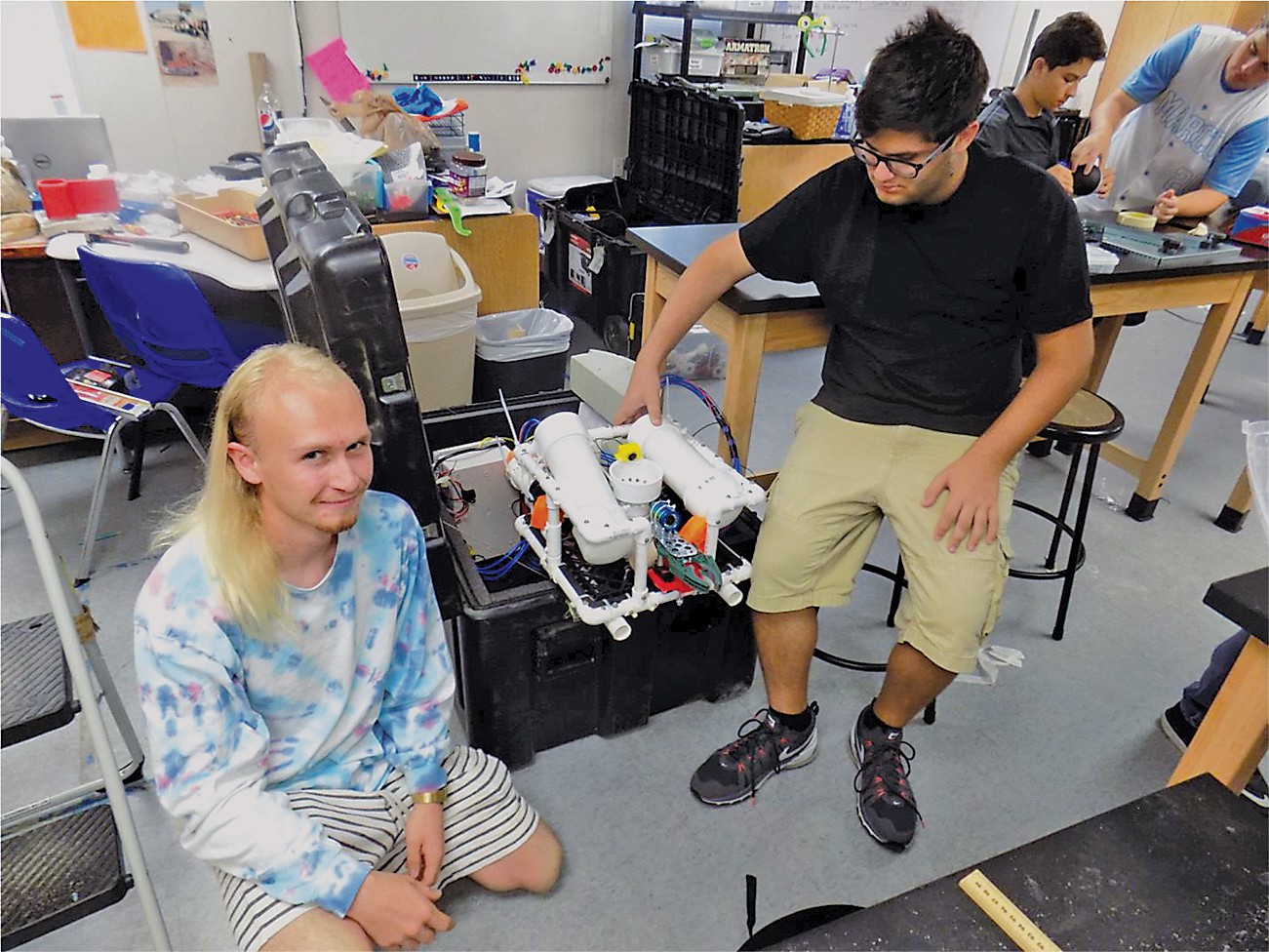 Will and Conner proudly unpacked and posed with their team’s finished ROV after returning from St. Petersburg. They said they learned a lot and will put it to good use next year when they return to the competition with a much more advanced ROV.

project. In fact it dovetailed nicely with what they were already doing. MIA offers advanced courses in biology and marine science, and sponsors a week long camp each summer in which students are taken out on the waters for a first-hand look at what is going on there. Jane Watt met with Wood to offer encouragement for this project. She offered him a lot of that, but could offer him no money. There was none in the budget. There hardly ever is for projects like this. With an extensive shopping list, Wood was on his own. He was learning, the hard way, a fact of life at MIA. With inadequate public funding, the school has to bring in an average of $500,000 in private donations each year – just to keep the school running. Coaches and teachers must do their own fundraising for projects over and above the bare bones amount they get in the budget. It is an extremely tight ship at MIA.

Already faced with a short deadline (other entrants had been preparing since November) Wood now had to go, hat in hand, out into a community to which he 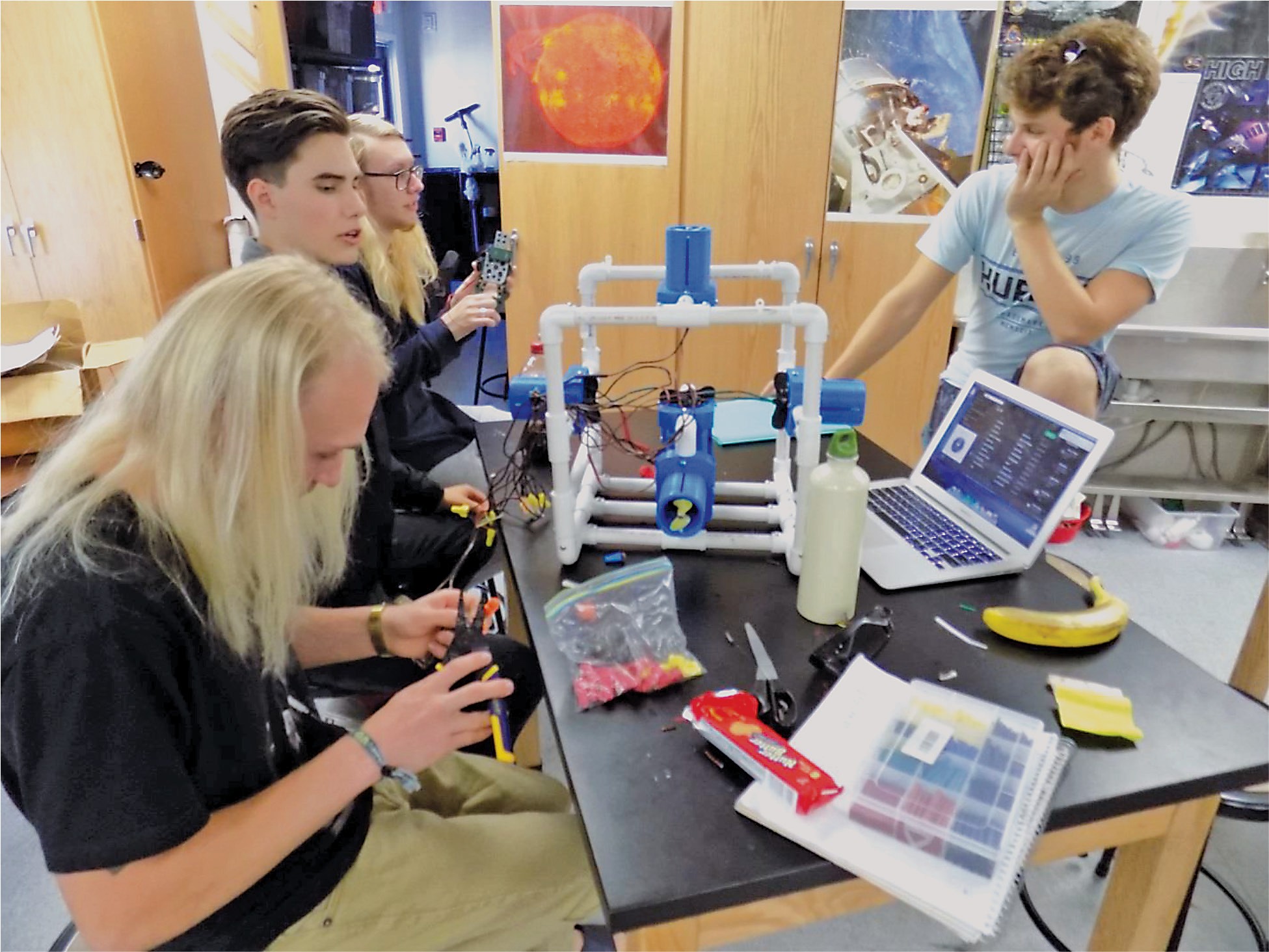 had just moved and with which he had few, if any contacts. At first he estimated that $1,000 would do the trick, but as he went along he realized that it would take more than twice this amount. He had inherited a 3D printer and some odds and ends, but this wasn’t nearly enough. He even supplied his own tools. He had raised the level of interest in STEM at MIA however, and one of its private donors had noticed the impact he was having. A gift of $2,000 enabled him to move forward. After school, and on his own time, Wood purchased stuff from area merchants and online. He bought everything from PVC pipe and nuts and bolts, to ROV tools, memory cards, a laser distance meter and video camera, and the books on how to set all this stuff up – 23 separate purchases totaling $1,852. There have been considerable additional expenses, many of which Wood has paid for himself.

With the equipment and parts in hand, it was a race against the clock to get everything done before April 8. Wood figured out a way to get things moving. 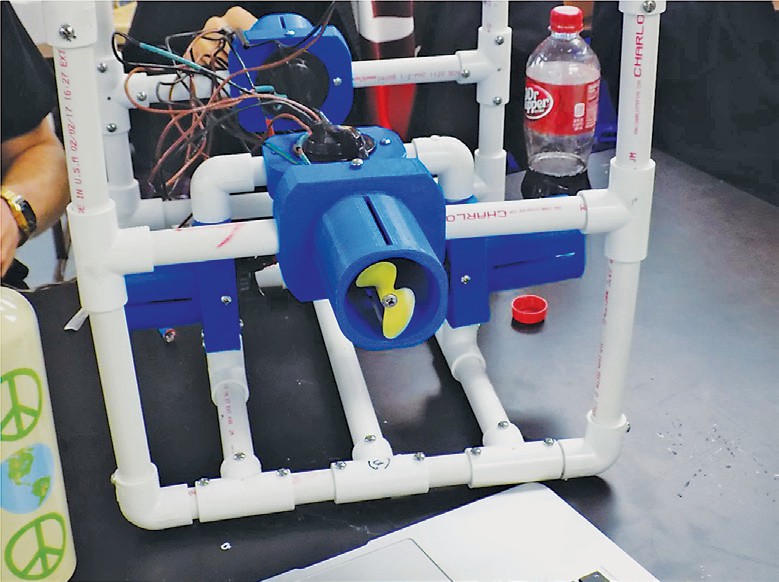 Close up of propeller thrusters built and designed by students to steer the ROV.

Working during class hours, he had his students build not one, but two robots, each group hoping their model would be the one chosen to go to St. Petersburg. “Inter-class competition would speed development and give us two alternatives to take up,” Wood said, “Between the two robots, we could use some strengths from each for the one we would finally enter at St. Petersburg.”

The robots would each be propelled by electric motors, also assembled by the students. Two groups were engaged in construction and other groups worked on the technology which would make it go. Multiple propellers had to be installed for stability and to steer the ROV for its required underwater tasks. The ROVs were completed a week before the competition. Whether they would work, let alone underwater, still had to be determined. Wood, even with the help of some friends, could not find a suitable and available pool on Marco Island. He finally had to settle for the pool at his condo complex over in Naples, taking his students over after school.

The robots worked OK and one of them was selected for the competition. The other went along 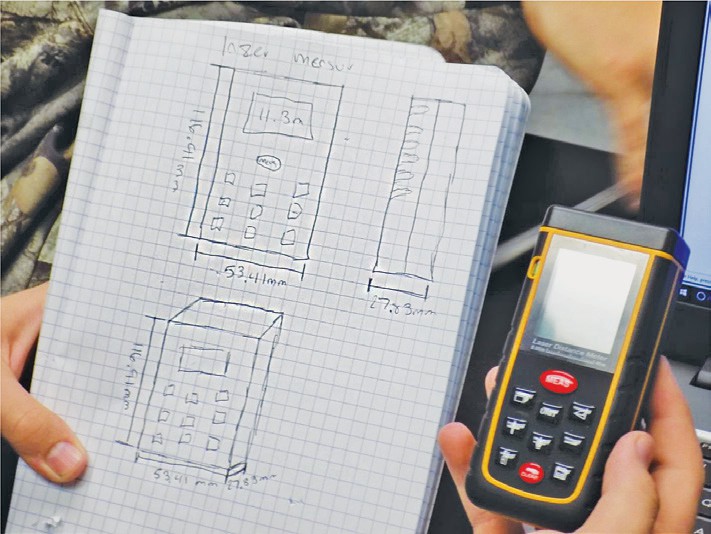 A laser distance meter with plans. Part of the mission was to survey the underwater area. Wood obtained laser distance meters and made a waterproof case for them to make that measurement. The physics class was doing optics at the time and was correctly able to deduce that since light would move slower in water than air, a correction would need to be made for the value generated by the device.

as a backup. But now, a seem- ingly insurmountable obstacle arose. The rules required that a team of six students be sent. Due to an ACT test being held on the same day, only two students could make it. It looked as if all the work was going to be in vain. “When I told the team that we would not be able to compete in St. Petersburg, even the students who could not go were visibly upset,” Wood said, “I took a shot in the dark and contacted the State of Florida director for MATE. She gave us permission to compete with only two students. In the event, juniors Conner Heidemann, Will Konkus and Ulysses Bunten were able to represent MIA. Conner Heidemann, who didn’t matriculate at MIA until January, recalls it all: “The competition was from 8:30 AM-2:30 PM,” Conner said, “There were about 50 people there. There were several different schools and teams participating. We walked in there and I instantly saw these intimidating robots. But as the competition began, I saw that many of them weren’t that great, they’d break or they wouldn’t be able to complete 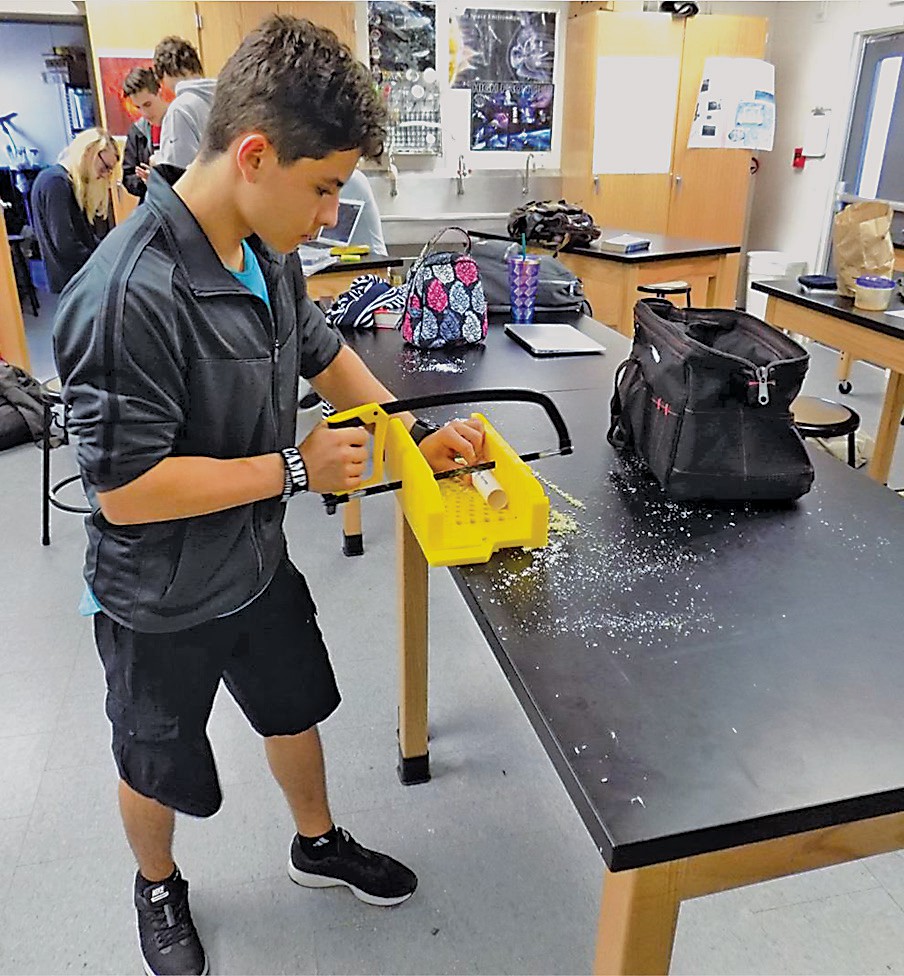 the task given. The tasks included building a robot that could turn water valves on and off, being able to tell which object is more radioactive, being able to lift objects, pull toxins out of a container, having someone that was blindfolded be able to maneuver them underwater, and other tasks. (Only the teams that placed were mentioned.) Unfortunately MIA did not place. For a small school that entered with very little experience and limited materials to work with, we did exceptional. It was a lot of fun and, I would recommend anyone with engineering, mechanical, and programming interests to [sign up for one of Mr. Wood’s engineering classes]. (An additional class may be added next year.) Mr. Wood was the most prepared for this project. He inspired several ideas and he had a lot of knowledge about how to go about building the robots. He helped a lot in the research as well.”

The team won no prizes after all but learned an awful lot along the way. Wood vows to be back next year, perhaps at a higher level. “I believe this is a way we can really make a difference,” he says, “Maybe we should try a full scale sub next…”