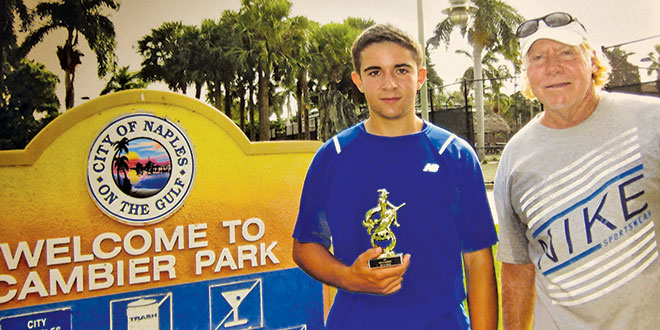 It seems that the Marco Island Academy is bursting with talented kids. This past October Thomas Harrington, a 14-year-old freshman at the school, competed in the “Spooktacular” tennis competition at the Arthur L. Allen Tennis Center at Cambier Park. Thomas, a level 6 player, placed first in his age group—an impressive victory.

Thomas has been playing tennis for over five years. He trains almost everyday at the South Seas condominiums on Marco Island, with high performance tennis coach, Gary Mcdevitt. Mcdevitt trains only the most serious of players, taking eight kids under his wing per year. Before he and a player can begin practicing together there’s a sort of screening process that they must go through. Mcdevitt will sit down with students and their parents in order to set goals and to make sure that he and the player are compatible to work together.

“I’m an old school type of coach,” said Mcdevitt. “Sometimes it’s not a good fit with somebody who’s not willing to do the work 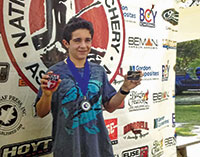 While competing (and winning) is obviously a goal for Thomas, it’s not the main focus. When asked if he wanted to pursue tennis as a career he said, “I’m not sure yet. I’m just trying to get a lot better.”

In regards to the day of the “Spooktacular” competition, Mcdevitt says, “Thomas was in the zone, his own zone. When the player is in the zone in means that they get every bit of their game out of what they currently have, which is a very good place to be. Thomas played really, really well. Probably the best I’ve seen him play.”

When Thomas isn’t playing tennis he’s off winning national archery competitions, his other passion. He also recently earned his Junior Black Belt in Taekwondo, so he’s pretty good at that too. Thomas is lucky. He seems to have found his passions early in life. He participates in three vastly different activities, and puts the same amount of effort into each one.