Gianna Rose has just completed her freshman year at Marco Island Academy. She has already made quite a splash. Gianna was attracted to MIA because of the STEM (Science, Technology, Engineering, Math) based courses available there. She has found that in a small high school like MIA, she is not pushed aside. She receives guidance and help from her teachers when she needs it. As Gianna puts it “I get to learn and have fun at the same time.” Gianna got a perfect score in the end of course (EOC) biology exam and was motivated by a forensic science elective to learn more about this area of science. More about this later. Overall, she attained a near perfect 3.996 GPA. Melissa Scott, the principal at MIA, finds Gianna to be an “amazing young woman with a strength and confidence that surpass her years.” Scott further notes that “as a student-athlete with a 4.0 GPA, Gianna is a role model to her peers and upper classmen as well.”

Gianna also excels at athletics, and was the starting point guard on the MIA girls’ basketball team. MIA made it into the district playoffs this year. 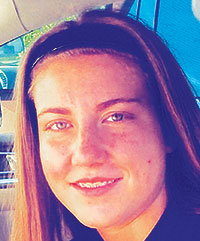 Gianna Rose, a sophomore this fall, will attend the National Youth LeadershipForum in Washington.

Gianna made the Under 16 Junior National Girls Basketball Team. This is a step in preparing the U.S. outstanding players for international competition. In her spare time, Gianna can be found “dribbling through cones” placed on her driveway or at open gym days at the Marco Island Charter Middle School. As with all MIA students, she participates in community service projects. She has a part time job scooping ice cream at Beebe’s, which in season, is almost every night.

In January of this year, Gianna was selected to attend the National Youth Leadership Forum: Law and CSI, sponsored annually by George Mason University, Fairfax, VA, (GMU) just outside Washington, DC. The forum is held in Washington. In the past it has had such speakers as Supreme Court Justices Sandra Day O’Connor and Antonin Scalia, Attorney General Eric Holder, and White House Counsel Harriet Miers. Upon successful completion of this forum, participants are eligible for college credit from GMU. The course runs for six days, from July 20 through July 25. In its prospectus, GMU offers participants a chance to “experience the full range of professions that exist in legal and forensic fields and explore opportunities for the future.”