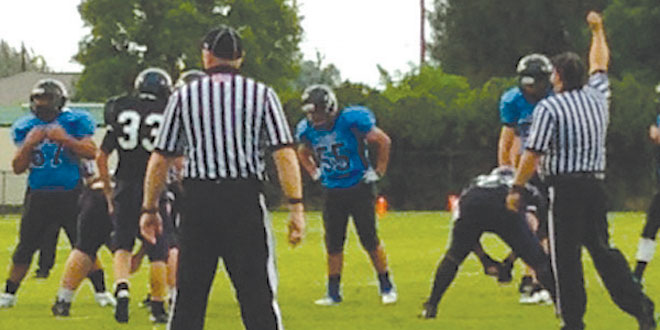 That is how Marco Island Academy Head Football Coach Andy Delgado and Defensive Coordinator Adam Lowery characterized the Rays first Spring season. It was a fitting description for a team trying to overcome a 2-8 Fall season record and one who faced a Spring season plagued with a low number of returning players — just 13 — soggy Florida weather and limited time on the practice field.

Still, Delgado, his staff and their team forged ahead to meet Oasis Charter High School’s team of 21 in Cape Coral late last month. Leaving nothing on the battlefield, the Rays rose victorious with a score of 35-7. When the two teams met last August, Oasis stunned MIA 55-6.

“We absolutely shut (Oasis) down for four quarters,” says Delgado. “It was an outstanding defensive performance. Not through the air, on the ground, inside or outside, they couldn’t get anywhere around us.”

While Delgado and Lowery emphasize the victory was a team effort, some players had stand-out performances. MIA’s

Colby Jones (39) and Cole Stretton (1) line up for another big MIA play on defense. Stretton had 2 interceptions for the Rays against Oasis Charter High School.

“Andrew broke through at nose guard for a three-yard tackle for a loss on one of the first plays, and that set the tone for the whole defense for the rest of game,” notes Lowery.

Juniors Cole Stretton and Jared Jackson commanded the offense, alternating between the quarterback and running back positions. Jackson’s three touchdowns and more than 100 yards rushing combined with Stretton’s on-the-field leadership propelled the offense.

“We were pleasantly surprised with Cole’s leadership abilities,” explains Delgado. “I have been coaching Cole for the last eight years. He always has been a very intelligent, smart football player, but the level he is at now, he has his team’s support and respect and the coach’s confidence. He is good role model to the other student athletes.”

According to Delgado, his team’s performance was partially by design and partially handed down by the fate of the football gods. The Rays’ focus for spring football was

MIA’s offense gets set for its next scoring drive. The Rays defeated Oasis Charter 35-7 in its Spring football game.

discipline and the mental aspects of the game. Lessons in discipline started the first week of practice, which consisted of nothing but conditioning.

The coaching staff had some help from the football gods — and Mother Nature — in teaching the psychological components of the game. “We couldn’t even get out on the field and practice between the rain and the lightning sirens, so we had a lot of classroom time. It turned out to be exactly what the kids needed,” Delgado says.

“At least half of our practices were non-contact,” he adds. “It enabled us to teach our kids our complex offense and defense. They actually learned it in the classroom first, and then were able to implement it on the field. They were able to understand what we were doing from the inside out.”

Lowery believes this system brought out a confidence in the team that was lacking in the fall. “Players change when they step in the field and they know what they have to do. By focusing strictly on the mental aspects, those 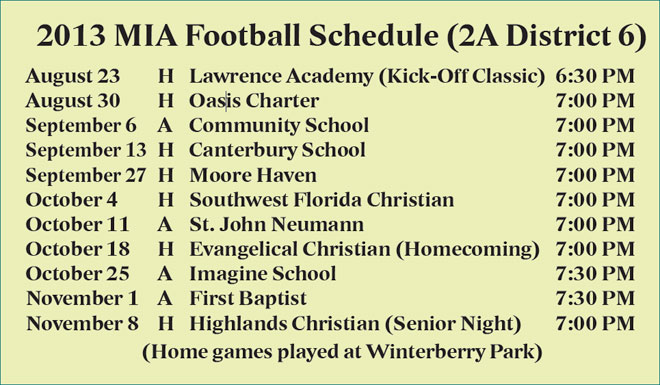 kids walked on the field feeling like they had a plan, knowing what they had to do.”

The Rays also had a great deal of moral support. In addition to the support from assistant coaches Chris Burt, Steve Schneider and Todd Davis, as well as MIA Athletic Director Roger Raymond and the school’s faculty and staff, the team was also bolstered by the encouragement of incoming freshmen and transfer students who came to watch practices and who cheered for the team during the game.

“Knowing that we had another 13-15 players coming in, it gave the team a lot of vision for the very near future,” Delgado notes.

For now, that future vision is on voluntary summer workouts for the players, focusing on nutrition and conditioning. The aim is to help the team meet its goals for next season in 2A District 6 play.

“Defensively, our goal is turnovers,” says Delgado. “Offensively our goal is not to make mistakes. We are still a young ball club, but we are excited about the future.”