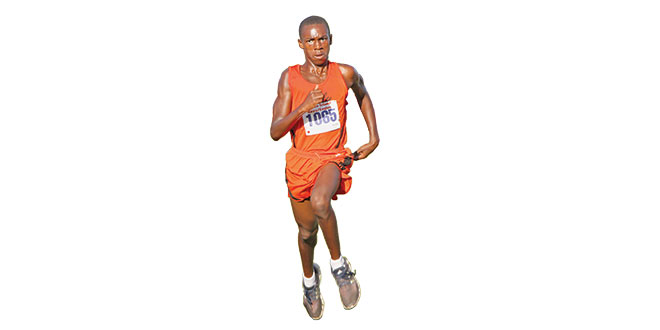 On Saturday, October 1, Marco Island Academy (MIA) and Marco Island Charter Middle School (MICMS) hosted the 4th annual Rays/Eagles Invitational Cross Country Tournament at Mackle Park. On a sun splashed and still day, 331 kids from 15 high schools and 17 middle schools, in Collier, Lee, Charlotte, and Hendry Counties, came to show their stuff and see how they measured up against some of the best in the area. The high school kids ran a 5K (3.1 miles) race, while the middle schoolers ran 2Ks (1.2 miles). The races started promptly at 8 AM and ended with an awards ceremony at 10:45. The course, twice around Mackle Park and thrice around the lake, was laid out mostly on grass and through trees, giving it a green cross country feel.

The first race of the day was for the high school girls and included 68 runners. Olivia Watt, an MIA junior, and Ryenn Hart, a Lely freshman, broke away from the field and were soon far in front of the pack. Hart stayed with Watt for the first third of the race, but then fell back until it seemed like Watt was racing alone. 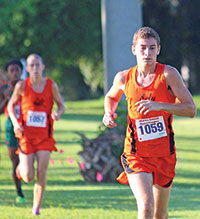 Photos by Patty PolingCody DeMalavez, on the way to a first place finish for Lely High School. Kole Bartos, behind Cody, held on for third.

Watt (19:45.89) and Hart (20:06:70) finished first and second. Morgan Forrer, a Mariner High School (Cape Coral) freshman came in third. Watt had her best personal time ever in this 5K. “Every time she does so, she also breaks an MIA school record, said Bruce Kretschmer, the head coach. Watt broke Rosie Poling’s previous tournament record of 19:51, set in 2013. Watt, who did not appear overly winded at the finish, said she was nervous before and throughout the race and never knew how far in front she was. “It takes energy to turn around and look,” she said. Aside from Watt, the Lely girls dominated, placing five of their runners in the top 10 of the field. The Lely team was judged best in the girls’ division, while MIA came in second. 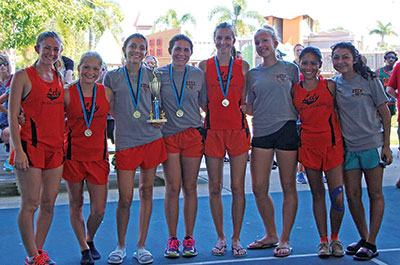 medaled as best high school team in the boys’ division. The boys’ race was not without some heroics by the Golden Gate team. About two-thirds through the race, Angel Florez tripped and fell, apparently from an unexpected extended leg from the runner in front of him. “I landed on a stump turning my ankle,” said Florez, one of the teams best runners, “It really hurt but I wanted to finish.” Struggling to his feet, Florez tried to continue. Then his teammates took over. Teammate David Ortiz coming up behind saw Florez limping. “He looked like he was in a lot of pain and needed help,” said Ortiz, “I’d rather help a teammate than win a race.” Without hesitation, Ortiz dropped out and helped Florez off the course. “Ortiz probably lost at least a top 20 finish in doing this,” said Golden Gate Coach, Marc Lyba, “He and Florez were our best runners.” David was in tenth position when he stopped to help Angel.” As it was, Ortiz finished 43rd. Angel Florez, however, finished in a blaze of glory. The entire girls team, who were awaiting the next race, witnessed the whole thing and rushed across 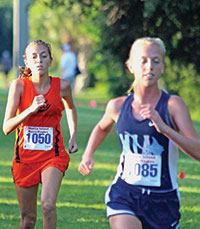 MIA’s Olivia Watt (right) and Lely’s Ryenn Hart led the pack by a wide margin coming into the second lap around the lake. Watt pulled away to set a new tournament record and Hart held on for second.

the field, gathering Florez up and supporting him back to the team tent, about 75 yards away.

The middle school races were next, both boys and girls running a 2K (1.2 miles) race. In a field of 83, Ellie Poling (12:45.75), a MICMS 8th grader, came in first, followed by Tallie Rushing and Siersha Shrack, both of Gulfview Middle School. The MICMS team came in second for best in division, with Gulfview nailing down first. For the boys, in a field of 94, MICMS runners took first and third – Johnny Watt, first (11:15.94) and Fernando Martinez, third (11:20.93). Reed Cunningham, of Gulfview Middle School was second. As with the girls, Gulfview was named best overall boys team, with MICMS coming in second.

Perhaps for the first time, a bona fide internationally known sports celebrity came to watch the kids. Abby Wambach, a two-time Olympic gold medalist and FIFA World Cup Champion, came over from Naples to watch the daughter of a friend. Wambach, who is moving to Naples, tried to disguise herself, but the girls (all soccer players and adoring fans) sniffed her out. Wambach was gracious and accommodating to those who wanted her picture, adding extra excitement to a picture perfect day.