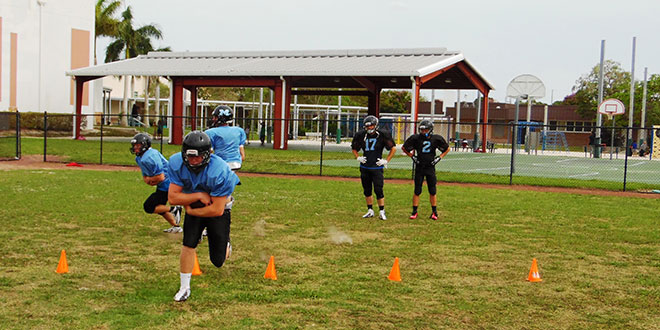 Spring practice for the Marco Island Academy football team is different from years past. They have experience. They are going through every drill with gusto and dropping for 10 push-ups should they make a mistake without being told…at least sometimes.

The team was 4-6 a year ago, its best record in its first three years.

They have 10 offensive starters back and eight on defense. Many of them have been together most of the past three years. There will be strong senior leadership for the first time in the school’s short history.

Most of all they are determined to go against quality schools in their new Class 2A-District 6. First Baptist Academy, Community School, St. John Neumann and Moorehaven mark the list of contenders they have never 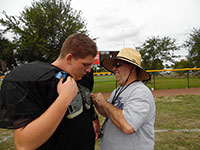 The Manta Rays host Deerfield Beach-Zion Lutheran at 6 PM on Friday, May 15 for its spring game. “They have a lot of speed and put points on the board,” MIA coach Greg Fowler said of Zion Lutheran. However, they also give up as many, or more. In four games in 2014, Zion won one game, giving up an average of 34 points a game. They averaged scoring 25 points a game, but 45 points came in a win over lowly St. John Lutheran, 45-0.

The Rays have a potentially high-powered offense returning. Junior Andrew Fowler is back to lead the team as quarterback. A season ago, he led the area in most passing yards. Many of the yards went to returners Cole Stretton, Cayden Couture, Patrick Michel 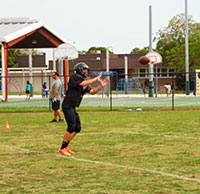 Michel and Tyler Gresham should lead the running attack, while Gresham’s key role may be at middle linebacker on defense. Brian Flynn will be back as a receiver and defensive back.

Collin McMullen was an offensive threat in his freshmen year, but suffered a serious injury, and played soccer the past two seasons. He will be back as the team’s kicker and may play some wide receiver.

“Our key to our success on offense is how well our O line plays, anchored by Kyle Ginther and Bon Deese, and the explosiveness of senior tailback Patrick Michel,” Fowler said.

However, the offense also shot itself in the foot last season with 42 turnovers. “When we averaged two turnovers a game we won, but when we had four we

lost. It is that simple,” Fowler said.

The Manta Rays take a page out of the Naples and St. John Neumann football growth book by playing a high quality out-of-state team before the fall season begins.

The Manta Rays will play Edgewood (Texas) in the Brook Hill Classic in Bullard, about 100 miles southeast of Dallas on Friday, August 28. The Rays play Edgewood at the Brook Hill School’s 2,500-seat Herrington Stadium. The Classic, in its sixth season, will have games each weekend night.

It is a major step for a football team in just its fourth season and playing under Friday night lights in Texas. “It will be an outstanding weekend of football,” Fowler said. “The kids are looking forward to the game and we are proud to be part of the Classic.”