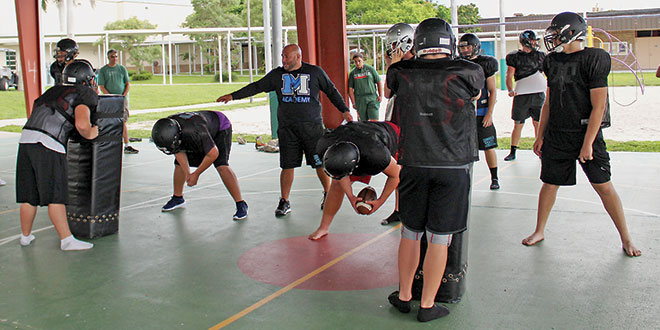 The lightning warning went off, forcing the Marco Island Academy football team to practice under a pavilion, behind Marco Island Charter Middle School on August 15.

The team is hoping they will provide its own lightning when it opens its season at home against Fort Myers-Gateway Charter at 7:30 PM on August 19 at Winterberry Park.

The Manta Rays lost 12 starters from a year ago, but is steadily building its own

Photos By Roger LalondeMIA’s Vinnie Moller would love to see this big a hole when the Manta Rays host Fort Myers-Gateway Charter on Aug. 19.

“Bon Deese has been phenomenal,” Coach Damon Coiro said. “He and Tyler Gresham
are all in to bring success to the team.”

Deese and Tyler will join Vinnie Moller in the backfield and also play some tight end on offense. They also will serve as linebackers on defense. Cornerback Christ Fermosa has impressed Coiro. Howard, too, will play both ways as a defensive end and Jack Fabian is expected to bolster the defense at 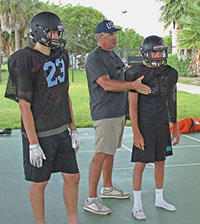 Defensive coordinator Pete Cugler in a demonstration with Will Carlisle as Brenden Howard looks on.

Senior Kyle Ginther will be the leader on the offensive line, along with Brenden Howard, Cameron Foss, John Roach, Jackson O’Shea and CJ Noel. Wide receivers catching quarterback Matt Grille’s throws will be Eric Fireman, Will Carlisle and Tanner Prange.

Cornerback Christ Fermosa has impressed Coiro. Howard too will

Manta Rays quarterback Matt Grille is under center, as a makeshift practice was necessary after a thunder warning.

play both ways as a defensive end and Jack Fabian is expected to bolster the defense at safety.

While the game does not count on the team’s season record, it is a measuring stick for MIA.

“For us to win against Gateway Charter, or against any team, is for us to limit mental errors,” Coiro said. “The team’s character, how they handle adversity, will also go toward determining our success. We want little successes to make big ones.”