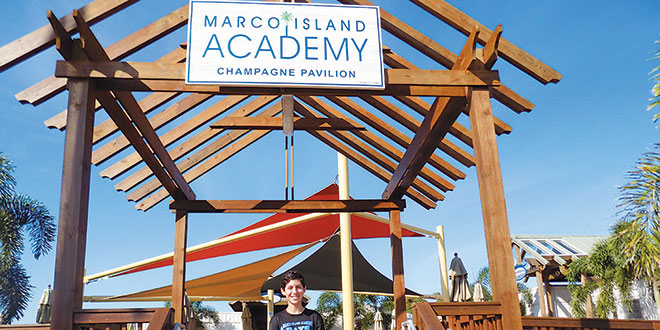 Fermin Mendoza, a Marco Island Academy (MIA) senior, has never received a grade lower than an “A.” He will graduate at the top of his class on May 29, 2015. His weighted GPA of 5.2 helped him gain acceptance to the prestigious Johns Hopkins University, Baltimore, MD, with scholarships, grants, and work study to pay for most of his college.

Fermin will be the first of his family to graduate from high school. His parents grew up in San Juan, Mexico, where his father toiled on a small family farm. His parents seeing little opportunity for their children in San Juan, immigrated to the United States in 1995. Fermin was born in Naples FL in 1997, and was soon followed by a brother and two sisters. In 2001, the family moved from Naples to Marco Island, where Fermin attended Tommie Barfield Elementary School and Marco Island Charter Middle School (MICMS), before attending MIA.

After middle school, a decision on where to go to high school had to be made. Fermin’s mother liked what she read about MIA, which was brand new at the time, particularly the school’s focus on math, science, technology and environmental and global studies. She knew that Fermin was drawn to these fields and that he would benefit from the small class size. At her insistence, in August, 2011, Fermin was enrolled in the first freshman class at MIA.

And his mother was right. Fermin has thrived at MIA and its STEM (Science, Technology, Math, Engineering) based education. He loves learning the how and why of science, math, and technology problems. Fermin chose to take all Honors and AICE courses – in both the STEM curriculum and other disciplines. The Honors and AICE courses are what brought his weighted GPA average up to the 5.2 level. Getting straight “A’s” in regular courses will otherwise result in a 4.0 GPA.

AICE or Advanced International Certificate of Education is written and overseen by the University of Cambridge in England. AICE classes cover more in depth and advanced material, and may require students to conduct independent research. Fermin was admitted to the AICE courses because of his excellent academic 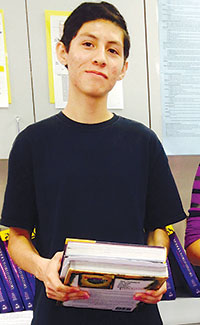 record, and high degree of motivation toward academic excellence. Fermin has already received the Cambridge Scholar Award for his outstanding record in AICE courses. According to the Florida University Equivalencies Chart, he has earned twenty-two college credits through AICE courses, with another seven likely to be added following this month’s testing.

Fermin will receive an AICE diploma after the final AICE exam results, which are released in August. Assistant Principal, Amber Prange oversees the AICE program and expects Fermin to get a diploma “with distinction,” the highest awarded. She has found Fermin to be a self-starter, seemingly limited only by the number of waking hours in the day.

Fermin’s education hasn’t been limited to science and math, he has also taken numerous AICE and Honors courses in American and World History, English, Social Studies and related courses. He speaks fluent Spanish and has completed two years of online study in the Cambridge Latin Course, which he does at home on his own time.

Fermin’s interests cast a wide net. During the summer of 2014, he received a scholarship from the Naples Council of World Affairs, so that he could attend The Governor’s Institutes of Vermont on Current Issues and Youth Activism. He was one of only three (out of forty-four applicants) to receive the scholarship. The Institutes took place at the School for International Training (SIT), Brattleboro VT. SIT school’s mission is to prepare students, graduate and undergraduate, to be effective intercultural leaders. Over two weeks, 192 hours of college supported projects and discussions took place. Students from Europe and Asia also participated.

Fermin raced for the MIA varsity cross country team, and in the fall of 2014, he broke the school record for the 5K run. He takes a lot of pride in this, having improved his 5K time by 6 minutes and 20 seconds. This substantial improvement must have required a sustained effort.

Fermin also helps his fellow MIA students to become more proficient, and regularly tutors them in math, chemistry, physics, and science. He has been a reporter and photographer for the school newspaper and a member of the yearbook staff. He also helped to organize and 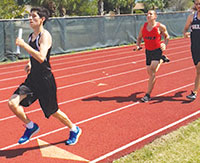 serve as a leader of a school math club.

In addition to a rigorous education curriculum, MIA requires all of its students to participate in community service programs by serving 25 hours per year for a total of 100 hours before graduation. Already Fermin has exceeded the required minimum, accumulating approximately 165 hours. He has volunteered his time for the Kiwanis administered Key Club International and The American Cancer Society’s Relay for Life. In November 2014, he and ten other MIA students held a fundraiser at MIA, successfully raising over $2500 for cancer research. Assistant Principal Prange noted that this spring Fermin had to rush over from his lawn maintenance job on a Saturday in order to participate in a Relay for Life event, another fundraiser for the American Cancer Society.

During the summer of 2014, Fermin put in sixty-three hours of volunteer work at the NCH Marco Island Urgent Care Center, helping out in the rehab department.

Lastly, he has received recognition from the Rotary Club and Seminiole Club of Naples for exceptional character and academic excellence.

In addition to school activities, homework, mentoring his siblings, and performing community service, he and his dad run a landscaping service. They are the sole employees and bread winners for his family which includes two younger sisters and a brother. On Friday and Monday afternoons and all day Saturdays, you might catch a glimpse of him pushing or riding a lawn mower. His expertise in math and technology come into play here. He keeps track of their business finances, keeps the IT system up and running, and ensures steady communication with their growing list of clients.

This fall, Fermin will choose a pre-med or neuroscience major. Whichever he chooses, Fermin’s chances of becoming a medical doctor or researcher in the field of neurology will be excellent. Fermin has an intense desire to find out how things work, and then work out a regimen to fix them when they malfunction. Fixing wayward neurons would be the most challenging and rewarding for him. There are many cures yet to be discovered in this field. Considering his accomplishments so far, Fermin has the talent to perhaps find them.