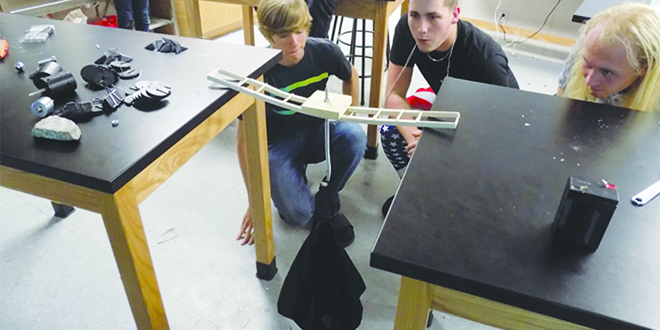 Photos by Barry Gwinn | Tension mounts, and Joey Golec and Parker Galloway hold their breath as their bridge nears the breaking point. They, along with Israel Chavez (not shown) went on to take first place in the competition.

Recently, there was a lot of cheering and clapping going on in Marco Island Academy’s (MIA) campus. It was coming from Room 301, where Frank Wood’s engineering students were going head-to-head in the school’s first-ever bridge building competition. Frank Wood, who also teaches physics, chemistry, and solar energy, had his students cheering, groaning, laughing and grimacing as four groups competed in a test of strength of the balsa wood bridges they had built. Wood, who has been a mining engineer superintendent for most of his life, had managed to suffuse his class with enthusiasm and commitment in a subject that is often drab, dry, and boring to many.

MIA Chair Jane Watt and Principal Melissa Scott got the word and came to watch and join the fun, along with MIA benefactors Jim and Glenda Bertelsmeyer. They weren’t disappointed.

Mr. Wood had set out simple ground rules concerning the materials to be used and how they were to be used. Each team got the same amount of 1/8” by 1/8” balsa wood and three tubes of the original Super Glue. Fishing line was allowed (but wasn’t needed) for suspension bridges. After dividing them into four groups, Wood stepped back and let the kids do their thing.

“I picked bridges because it would help the students to understand the concept of force. This understanding is key to most of the engineering disciplines. Bridge building was something real that could get them to thinking,” Wood said, “I told the kids that customers would want bridges that wouldn’t fall apart under stress. ‘It’s your bridge,’ I told them, ‘Once you decide on the type of bridge you want to build, you take ownership of it.’” The idea, Wood told me, is to have kids take on a responsibility and complete that responsibility. It is much better, he said, if the students choose what that responsibility will be. Consequently, Wood didn’t require that any particular bridge or bridges should be used as model. As it turned out, three of the four competing groups chose the dependable truss bridge as a model, many of which were built in the 19th century to transport the heaviest commercial rail traffic. Some of these bridges are still in use today. The fourth group, Group 3, built a bridge which brought snickers and derision from some in the crowd (including me). It looked like the framework for a lowly footbridge, which would probably snap early in the competition. This model might be OK for a narrow stream or brook, I thought, it could never be used for anything wider. All in all this looked like a poor excuse for a bridge and maybe some hasty engineering at that. But, it was a bridge.

Mr. Wood had moved two of his tables so that a 20-inch gap separated them, close enough for the bridges to span. He had improvised a device which could sit on the bridge, allowing weight to be added until the bridge snapped. As the weight increased and the tension mounted, each group plus any acolytes they had picked up, bit their nails and cheered their bridges on. There was a good deal of hooting and hollering. And then a funny thing happened. The truss bridges, their design backed up by engineering science and favored by railroad bridge builders, did not bend as weight was added. But boy did they break. On the other hand, Group 3’s contraption, bent and bent, and bent some more. But it would not break – or so it seemed. A bag full of extra weight had to be added, until at 27.5 pounds, it finally snapped. This, from a bridge which weighed less than an ounce. Group 3, consisting of Joey Golec, Parker Galloway and Israel Chavez, had aced the competition, building a bridge which was both lighter and stronger than the others. It had supported close to 500 times its own weight. And the crowd went wild! Golec and Galloway were ecstatic (Chavez was absent). Their obvious joy at what they had accomplished was contagious. Mr. Wood said he was not surprised “I expected one of the three truss bridges to win,” he said, “but in engineering, nothing surprises me. It was a learning experience for all of us.” Group 3 may have been on to something. It turns out that there is a wooden footbridge in Essing Germany which spans the Altmuhl River, a tributary of the Danube. It is 493 feet long. Its design is strikingly similar Group 3’s bridge.

The final results were:

Third Place: Group 4- William Konkus and Winter Stoico with a 1.3 oz. bridge supporting up to 16.5 pounds.

I never thought I could have this much fun in an engineering classroom. Now, I can’t wait to see what these kids come up with next year.