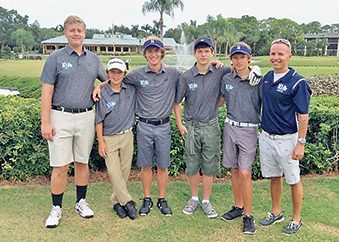 On October 11, the six-man Marco Island Academy’s boys golf team competed in the District 8 finals at the Bear’s Paw Country Club in Naples. Freshman, Mike Hauer (78), senior, Hunter O’Neill (82), and senior, Keaton Williams (88), advanced to the regionals, held on October 17 at the Verandah Golf Club in Ft. Myers. The regionals course was said to be especially challenging. Although no medals were won, Hauer(78), Keaton(84), and Hunter(100) gave a good account of themselves.

First year coach Brian Glamuzina, recently joined the faculty at MIA, having previously coached and taught in Connecticut. The Rays compete in honor of the “Squire,” legendary golfer and Marco resident, Gene Sarazen. His daughter, Mary Ann Sarazen, founded the Gene and Mary Sarazen Foundation, which sponsors MIA golfers. On November 5, the foundation is holding its annual golf tournament at the Rookery of Marco Golf Club, a five star course, with proceeds going to MIA.