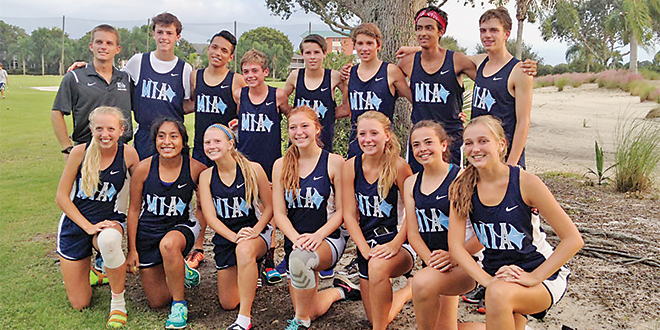 On Thursday, October 20th, the Region 2 District 8 (Class 1A), cross country meet was held at the Hibiscus CC in Naples. District 8 is composed of 10 teams, drawn from Naples, Fort Myers, Everglades City, Marco Island, and Moore Haven. This meet would determine which teams and individuals would go on the regional meet at Lakeland, to be held on October 28th.

For the first time in its five year history, the entire Marco Island Academy girls cross country team qualified for the regional meet. All seven members of the girls team finished in the top 40. Their combined score will send them all to Lakeland. Only 4 of the 10 competing teams get to go. Olivia Watt (20:14.93) finished 1st, with Anna Chamberlin (23:26.80) coming in 13th. As top 15 runners, they both received individual bids to the regionals. Watt’s first place finish again put her in the MIA record book as the first Ray to ever win the district meet. Her winning time was again a personal best, breaking her 4 week old MIA record of 20:22.52.The boys tied 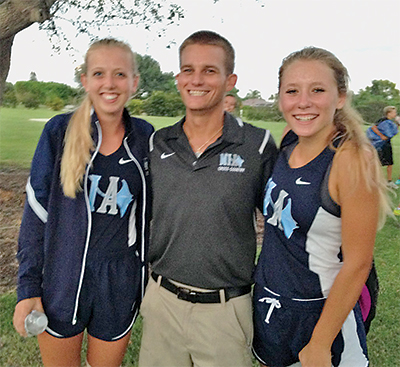 Coach Kretschmer with Watt and Chamberlin.

“Both teams ran a great race,” said Coach Bruce Kretschmer, “I know the boys are a little disappointed with their results, but they have a super young team and will all be back next year, looking to place.” So will the girls; there are no seniors on the team. “The girls blew me away,” said the coach, “I was hoping we might be able to squeak into fourth place, and we ended up only one point from third. The girls are really excited to be going to regionals for the first time. This group of girl has been working towards this for the past 3 years, and I couldn’t be happier to see their hard work pay off. They’ve earned it.” So has the coach. Despite being the chef and co-owner of the popular Kretch’s Restaurant on Marco Island, Coach Kretschmer manages to make all the late afternoon practices of the Rays cross country team. He drives them hard but runs right along with the team. On the rare occasions when he can’t make it to practice, Jim Watt ably fills in for him.