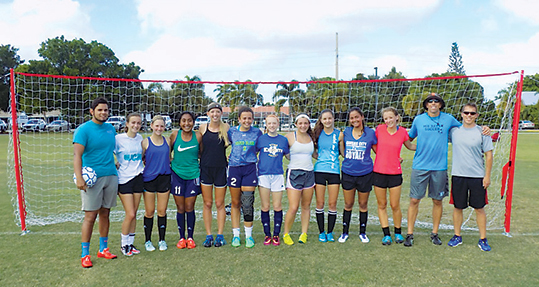 Marco Island Academy first fielded a girl’s soccer team in 2013, two years after the school was founded. They went without a win for their first two seasons, under two different coaches. Jim Watt took over as coach in the team’s second season, depending mostly on a core of talented but inexperienced freshmen. They took some tough, lopsided losses that year, but under Watt’s guidance developed an esprit de corps that has grown to be the hallmark of this feisty group of girls.

Last year the team won four of its games and tied two others–the first wins and the best season in MIA’s short history. This year, the original and talented core of freshmen are now juniors, and they are all back. Combined with a group of sophomores, who made major contributions as freshmen last year, and one stalwart senior, the team looks to improve on last year’s best record. Watt is also pleased with the skill level of his four incoming freshmen, all from Marco Island Charter Middle School. “We are building a program, and it takes time,” said Watt. “This year [for the first time], we will have quality players at every position and quality substitutions [coming off the bench].” Watt is trying to instill a tougher 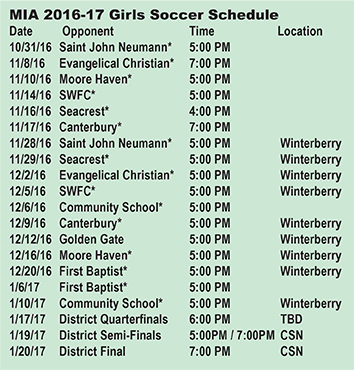 mentality to his players approach to the game. “They no longer have the excuse of being young and inexperienced,” said Watt. “I want them to take it to the other teams, beginning with pregame warmups.”

For personal reasons Abby Meredith, the team’s leading scorer and arguably the best player in Collier County last year, will not be returning. Abby will be a tough act to follow. Jim Watt is depending on center midfielder Olivia Watt (his daughter), to fill some of the void. “Controlling the center of the field is how you control the game,” said Watt. “Also we have a strong and aggressive defense, which should keep us in every game [with an opportunity to win].” Watt also noticed huge improvements in maturity and attitude with increased skill levels. Plagued by nagging injuries last year, Watt has added strength training to every practice.

In addition to Meredith’s absence, Watt has to deal with girls missing practice due to their participation on other teams. MIA, although a small school of about 235 students, manages to field 16 varsity teams. “At a small school, all of the athletes play multiple sports,” said Watt. “Low attendance at practice is common this time of year.” Soccer currently overlaps with cross-country, volleyball and swimming, which combined can cause conflicts for 14 of Watt’s players. “All coaches work together in an effort to cross-train the athletes,” Watt added.

The Lady Rays open up a grueling
17 game schedule at St. John Neumann, 5pm on Monday, October 31st. With their first six games on the road, the home opener is not until November 28th at Winterberry Park.

I know these girls, how hard they have worked, and what they are capable of. I can’t wait to see them in action.