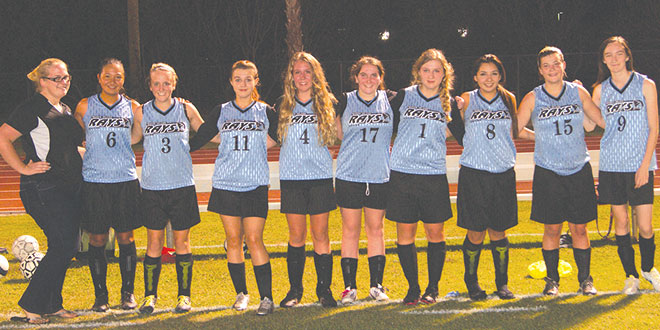 This year’s Marco Island Academy girl’s soccer season has come to a close. Eight games were played throughout the entire season, all of which were lost, though the Marco girls did not go down without a fight. The girls started practicing in October, and worked hard to be prepared for the season ahead of them.

In the years past, MIA has always had a coed soccer team, as there were never enough girls to participate for two separate teams. Having a coed team proved to be a disadvantage for the girls participating. The boys got a lot more playing time then the girls. Having a boy’s and a girl’s soccer team is a huge step in a positive direction for the athletic department at MIA.

“Most high schools have two separate teams, so I was really excited to hear that we had a girl’s team this year. This will provide many more opportunities for girl’s to excel in soccer at our school.” said Katie Cookson.

Having a team separate from the boys meant that the girls had more time to focus on their own soccer skills. They had more playing time, and they had a better chance of making the team.

Another benefit to having a girl’s team was that it paves the way for future generations to come. The younger girls coming from middle school will have an increased opportunity to participate and succeed due to this years team’s hard work.

“It was a learning experience for everyone on the team. A lot of us had never played soccer before in their lives, including me; but we practiced hard and it all worked out in the end. I’m really excited for next year, with all the new freshman coming in,” Adi Gratkowski said.

Coach Katie Oakley worked diligently to prepare the girls for a tough season. She helped them keep the level of enthusiasm high throughout the entire season — no matter how hard the situation got. Her hard work was greatly appreciated by all the girls on the team and really paid off on the field.