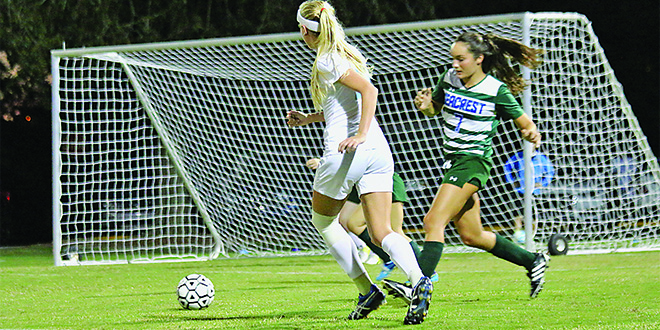 Photos by Jenny Cartwright:Above: Olivia Watt gets set to launch one of the four goals she scored during the Seacrest game.

After winning three of the five straight road games to begin the season, the Lady Rays finally got to play in front of the home crowd at Winterberry Park, where they won two out of three.

On November 28, the Rays overpowered a talented St. John Neumann team, 4-1. The Rays defense was all but impenetrable, with strong performances from their back defensive line of Jenna Palumbo and Elizabeth Shultheis in the middle, with Julia Cartwright and Julia Wagner on the outside. Goalkeeper Kayla Kladis had another good game, just missing another shutout. Morgan Jones added to the defensive mayhem with one of her best games at defensive center midfield. Sophomore Teagan Havemeier led the scoring with two goals and an assist. Olivia Watt and freshman Ellie Ball each had one goal with Watt adding an assist.

The next night, November 29, Marco Island Academy (MIA) took on Seacrest, a team they had beaten 4-0 earlier in the season. This time the Rays pulled off their first “mercy,” shutting out Seacrest 8-0. A game is called when one team gets ahead by eight goals. The Rays had suffered through mercy losses many times in the last three years, but had never pulled this off themselves. A mercy is a hard thing to do, especially when two teams are relatively evenly matched – like a no hitter perhaps? In any case, it was a major milestone for the team, and another school record set. It meant a lot to the girls. This game featured relentless attacks by the Rays offense, each one closing in on the Seacrest goal with alacrity and single-minded determination. The constant attacks were powerful and intimidating, punctuated by some nifty passes. This, plus the Rays superior conditioning wore Seacrest down in the second half. All the while, distributing the ball to her teammates, center midfielder, Olivia Watt, led the team with four goals and two assists. Danya Zarate had two goals and two assists; Ellie Ball, two goals and one assist; and Teagan Havemeier, two assists. “I always value the assists way higher than the goals.” Coach Jim Watt often points out.

On Friday night, December 2, the Rays were jolted back to earth by a powerful Evangelical team, the best in the league, and arguably the best Southwest Florida. This time, the Rays were on the receiving end of a “mercy,” losing 8-0. The opponents were now the ones mounting a string of strong attacks, one after another, many ending with high velocity kicks toward the corners and upper reaches of the Rays’ goal. It was like a series of cannon shots going off. Most of the game was spent in the Rays’ end of the field, with only three shots on goal being attempted by MIA. Not all of Evangelical’s attacks got through. The Ray’s always intrepid defense was highlighted by the feisty and spirited performance of freshman Jenna Palumbo. When a breakthrough seemed inevitable, as often as not, Palumbo could be found streaking toward the ball to deflect it and foil the attack. I found her performance to be riveting.