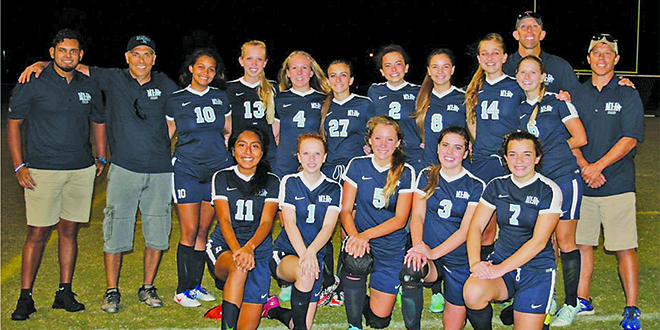 Trying to build on last year’s 4-10-2 season, the Marco Island Academy (MIA) Lady Rays took to the road for their first five games. With a solid core of sophomores, juniors, and one senior returning, the Rays were hoping that the incoming freshman would give them a boost. They weren’t disappointed.

Their first game was at highly rated Evangelical Christian in Ft. Myers, on Nov. 8, where the Rays lost 0-7. Although giving up six goals, in the first half, and losing starting goalie Kayla Kladis to injury, the defense allowed only one goal in the second half, and so avoiding being “mercied,” or having the game stopped when losing by eight goals. “The girls set a personal challenge to themselves at half time,” said Coach Jim Watt, “They wanted to play the entire game out instead of being mercied. That they did it took a tremendous effort in the second half and set the tone for the upcoming games.”

Two days later, the team made the two-hour bus trip to Moore Haven on the shores of Lake Okeechobee where they got a shutout, winning 5-0. “The defense was in shutdown mode,” said Coach Watt, “Nothing got past our four back defense of Julia Wagner, Jenna Palumbo, Julia Cartwright, and Lexi Harrington, with Elizabeth Schultheis playing sweeper, (the last defender on the field). Danya Zarate and Anna Chamberlin ably filled in in goal for the ailing Kladis. The offensive was well balanced also, led by freshman Ellie Ball, with an assist and two goals. Junior Olivia Watt had one goal and two assists, freshman Lauren Faremouth, one goal and one assist, sophomore Lexi Harrington, one goal, and freshman Jenna Palumbo, with one assist. Everyone contributed,” said Watt, “We were in much better condition, and it showed in the second half.”

On Nov. 14, the Rays again went up to Ft. Myers to play the Southwest Florida Christian Academy (SWFC). They won this one 4-2, with the Rays defense gain proving tough to penetrate. “The defense was 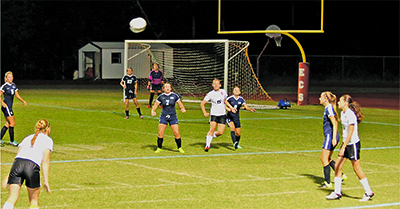 playing lights out,” said Coach Watt, “one of SWFC’s goals was from a penalty. Our girls were communicating and dominating.” Freshman Ellie Ball, again led the offense with two goals and an assist, followed by Olivia Watt with a goal and two assists, Lexi Harrington with one goal, and Lauren Faremouth and Jenna Palumbo, each with an assist.

On Nov. 16, Seacrest Country Day (at Naples) was the second team to succumb to MIA’s smothering defense this season, losing 4-0 to the Rays. “Our defense pitched another shutout,” Coach Watt said, “Plus we had Kayla Kladis back in goal, which was a huge advantage. Elizabeth Schultheis and Jenna Palumbo locked down the center of the field and were outstanding.” On offense, Olivia Watt scored a hat trick (three goals). Jim Watt, who has been coaching his daughter for the past three years, said it was the best game he had ever seen her play. Lauren Faremouth had a goal and an assist, with Teagan Havemeier and Lexi Harrington each with an assist.

On Nov. 17, MIA’s three game win streak ended at Canterbury High School in Ft. Myers, with a 0-4 loss. The Rays let in two soft goals in the first half. Their two second-half goals came late in the game after Coach Watt had pulled a lot of the defenders to the front of the field, trying to make something happen. Canterbury had been running up some pretty big scores in the league, but Coach Watt, a glass half full guy, was undeterred. “They were good,” he said, “But we can beat them in Marco. The girls played really strong.” The Lady Rays will get their chance on Dec. 12, at Winterberry Park.

After going winless in their first two seasons and winning only four last year, the girls now sport a winning record for the first time ever. This is a fun team to watch and they are only going to get better. Next game starts a four game home stretch against St. John Neumann, on Nov. 28.