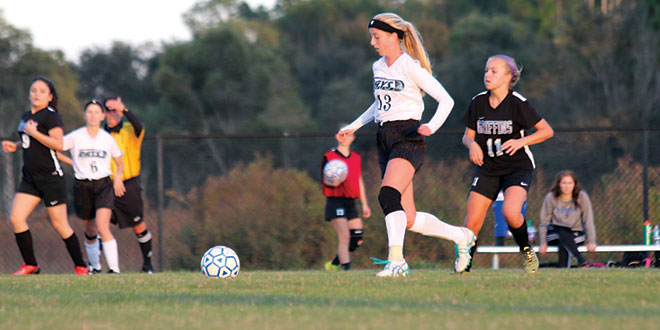 Olivia Watt (13) lines up a shot off a Teagan Havemeir (6) pass. PHOTO BY JENNY CARTWRIGHT

Since a closely contested loss at First Baptist, 1-3, on December 3rd, the Lady Rays have rebounded to win three of five and tie the last regular season game with Gateway Charter. During that stretch the Rays beat Canterbury, Southwest Florida, and Seacrest. It was their 6-2 victory over Seacrest on January 6th however, which may prove to be a watershed breakout game for the MIA girls’ soccer program.

Having split their prior two games with Seacrest, the Rays played a dispirited first half against Seacrest. One of the players likened their play to sleep walking. The Rays trailed 0-1 until the last minute of the half, when Olivia Watt finally put one in out of a scrum in front of Seacrest’s goal. The defense, as usual, was superb.

The second half was a different story. The girls looked fantastic. They were on fire. “They were talking to each other,” said Coach Jim Watt, “In the second half, they took the game over.” The Rays scored six more goals in the second half, holding Seacrest to only one. Olivia Watt scored her second goal of the game, while Abi Merideth added two goals (one unassisted), Teagan Havemeir, one, and Miranda Webb, one. Olivia Watt had two assists. Teagan Havemeir, Miranda Webb and Morgan Jones had one assist each. Olivia Watt returned to the center midfield position and did a good job controlling the flow of the game. The Rays’ defense is a feisty, gritty bunch that annoys, harasses, and disrupts the opponents’ attackers. When all else fails, the tandem of Danya Zarate and goalkeeper Kayla Kladis gets the ball out of the box and back down the field. “The defense played awesome. Kayla was impressive,” noted Watt. Final score 6-2, Rays.

On January 7th, the Rays traveled to Naples to play a very good Gateway Charter team. In this game, it was obvious that the Rays were outmatched in skill, speed, and aggression. Coach Watt called it a chippy game (Remember that feisty, gritty Rays’ defense) and was glad that no one got hurt. “The girls played so well, and I was really proud of them,” said Watt, “Our girls fought hard and elevated their play.” Gateway’s last goal came late. MIA had opportunities to win this one, but the shots wouldn’t go in. Kayla Kladis, once again, held the opponents to two goals. “Kayla was a monster in the net,” noted Watt. Abi Merideth, playing striker, scored both goals for the Rays, with assists from Danya Zarate and Lexi Harrington. Final score 2-2.

“The girls learned they can compete at a higher level. It was exciting,” concluded Coach Watt. This reporter can only add that this group has been playing together for only one year. They will all be back next season and the year after that. Get your season tickets now. These gals are fun to watch. They have left their fans happy and with high expectations.