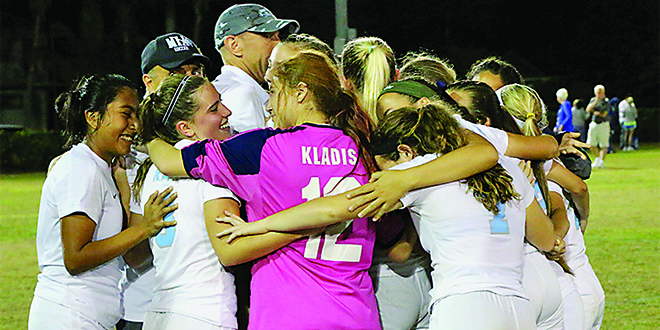 Photos by: Jenny Cartwright | Show the love: Lady Rays surround their coach in a joyous celebration. A crushing season finale cannot erase what they have done together this year.

The MIA girls soccer team had a record breaking season this year – the best ever – capping it off with its first district playoff game at home. On January 17, the fourth seeded Rays hosted the fifth Community School Seahawks, with whom they had previously split close games. At stake was a trip to the district semifinals. It promised to be another closely contested game. It wasn’t.

In a devastating season ender, the Rays inexplicably got crushed 4-0. “It was a really tough emotional game and I am just now getting over it,” said Coach Jim Watt, four days later. “Community School brought in new players that were not with the team in the prior (two) games.” The score was just 1-0, Seahawks, at halftime, but easily could have been a 1-1 tie. Olivia Watt had sent a sizzling shot that bounced off the Seahawks top goal rail and went in. It was a close call, but the refs saw it differently, disallowing the goal. “That goal could have been a game changer,” said Watt. Two of the three Canterbury goals in the second half came after Coach Watt had moved his players, up the field in order to generate some offense. That left a lean defense, which couldn’t stop the final two Seahawks goals.

The final record for the Rays was 8-9-1, three of their losses having been by only one goal. After their fourth win in November, they set a new school record with every subsequent win, having only won four games last year and none in the two years before that. The team registered its first ever mercies with 8-0 wins over two different schools. Four freshmen joined the team this year and made a significant impact. Ellie Ball and Lauren Faremouth burst onto the scene with impressive play; Ball racing downfield at top speed (She has only two speeds – fast and very fast), scoring goals from the right, and Faremouth playing right midfield alongside Olivia Watt, handling everything that Watt couldn’t get to. The opponents’ defense and offense had to deal with either Watt or Faremouth on almost every play. A formidable combination, the game always seemed to go through them. Faremouth gets my vote for the second place MVP on this team. Jenna Palumbo delighted everyone with her break up of opponents’ attacks on defense and her goals from way out on offense. Palumbo always seemed to be in the right place at the right time. Marissa Roath joined the team with little experience playing soccer. She made up for it with her complete loyalty to the team and willingness to fill in wherever needed. Four sophomores played this year. Morgan Jones, Lexi Harrington and Anna Chamberlin formed the core of a formidable defense, which never flinched during opponents’ attacks. Teagan Havemeier, the other sophomore, was usually a blur on the field racing to the ball and scoring or assisting. Opponents found it difficult to deal with Havemeier whose footwork, speed, and accurate passing kept them back on their heels.

The one senior on the team, Julia Cartwright, the lone remaining veteran from the 2013 season, would be my choice 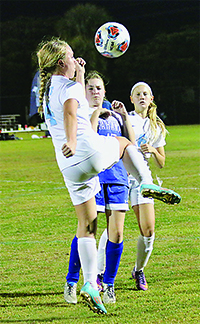 as the most popular and dependable player on the team.

Of the five juniors on the team, Olivia Watt, playing center midfield, gets my vote for team MVP. She inspired confidence in her teammates who, when they could, always tried to get her the ball. They knew it would be coming back to them or that Watt would produce a shot on goal. Watt was almost always in the center of the action (largely by design) and ended up leading the team in scoring and assists. Junior Danya Zarate is my pick for best all-around player. She can play any position asked of her and play it well. During the first half of the season she was asked to play goalkeeper and defensive back. A resounding boom signified that she had broken up another attack and sent the ball flying down the field. During the second half, she was switched to left midfield and became a scoring machine, putting in shots and making assists like she had been doing it all her life. Her solo charges through the defense were epic. Zarate even had a four goal game (as had Watt) and ended up as the team’s second leading scorer. Elizabeth Schultheis, in combination with Jenna Palumbo, patrolled the opponents’ goal area, streaking to the ball and breaking up attacks. It was hard to get the ball past these two. I can picture Julia Wagner, another intrepid defender, standing fast against opposing attackers, thundering down the field at her. You might be able to get around Wagner, but you were never able to get through her. Kayla Kladis, when not injured, played goalkeeper for the team and kept the Rays in a lot of games with some solid saves. The Rays played better when Kladis had their back. All these girls will be back next year. The one senior on the team, Julia Cartwright, the lone remaining veteran from the 2013 season, would be my choice as the most popular and dependable player on the team. Cartwright never misses a practice or a game. You always know what you are going to get from her – the same 100% effort every time. She patrols the area to the left of the opponents’ goal, throwing herself without hesitation into the midst of opponent’s attacks, often sacrificing her body to do so. She is the grand dame of the team, looked up to, liked, and respected by her teammates. They even awarded her a game ball once. We will all miss her. Last but not least is team manager, freshman Camden Jones. Jones was constantly at Coach Watt’s beck and call at practices and games. He was always there. The girls loved him.

And so, my third season with this amazing group of athletes and friends has ended. This year they have started to play soccer the way it should be played. They have been entertaining and competitive, drawing ever-larger crowds to their games. They showcase varsity sports at their best. These girls leave everything on the field. And, they will all (but one) be back next year. I can’t wait. Neither can their coach. Stay tuned. They are much better than cable TV.