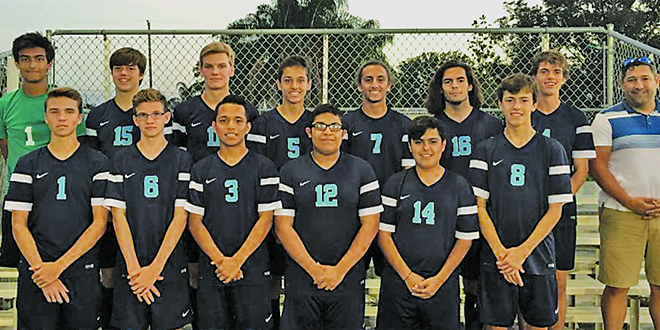 Fernando was born and raised in Mexico, a country which regards soccer as practically a state religion. Higuera started playing in the youth leagues there, almost as soon as he could walk. Coming here on a tourist visa in 2000, Higuera’s uncle, a Catholic priest, put him in touch with the University of Missouri, which offered him a scholarship. “My goal was to learn to speak English as soon as possible,” said Higuera, “I also wanted to get a college degree and then teach Spanish in an American school. The scholarship opened up both possibilities.”

Upon graduation from the University of Missouri, Higuera taught in a succession of St. Louis area high schools, ending up at Metro Classical High School in St. Louis where he taught Spanish and coached the cross country team for five years before coming here. A school of about 324 students, Metro Classical High School is made up of predominantly Asian, Pacific Islander, and Hispanic students. Forty-percent of its students qualify for the free lunch program. According to U.S News and World Report, it is one of the best high schools in the United States. Along the way, Higuera married Heidi Fromsdorf, whom he had met at the University of Missouri, and a son, Anthony, was born in 2007.

The St. Louis area is known to have some of the worst weather in the U.S. Florida has some of 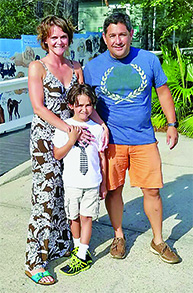 the best. Fernando and Heidi looked south. In July, Higuera discovered a posting by MIA, looking for a Spanish teacher. An interview with the staff and a tour of the school followed. Higuera knew that this was where he wanted to teach. Coincidentally, MIA is about the same size as Metro. “I was impressed with how much they cared about the students, both academically and in their lives,” Higuera said, “The small size of the school encouraged a degree of closeness between students and staff. This had worked well up in Metro.” What really impressed him was the Advanced International Certificate of Education (AICE) program at MIA, overseen by the University of Cambridge in England. It was similar to the International Baccalaureate Programme at Metro. “The AICE curriculum is evidence of a school’s commitment to academic excellence,” noted Higuera, “I wanted to be a part of that.” Higuera was also impressed with MIA’s community service requirement for its students – 25 hours per year, for a total of 100 hours. (Metro had required a total of 300 hours). What cinched it however was an offer of the head coaching position for the boys’ soccer team. “Heidi is still in St. Louis, teaching Spanish and English as a second language,” Higuera explained, “She and Anthony will be moving down here in December. Until she gets a job, it would have been tough to get by on just my teacher’s salary. The extra coach’s pay definitely helps.” Even at that, Higuera figures they will only be to afford to buy a home in the Naples area. He presently rents a one-bedroom apartment in Marco Island.

Higuera initially hoped for a team of 16 or 17 players, and has hit the ground running. He has been going around the school recruiting students, and has had 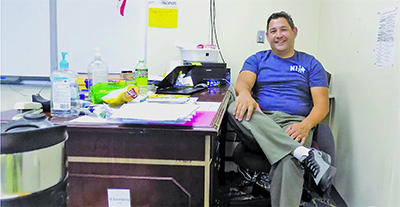 Photo by Barry Gwinn: Coach Higuera in his classroom.

some initial success. There are six or seven players returning from last year’s 3-12-1 team. “They were really decent players,” says Higuera, “They’re working hard and are looking pretty good. We also have three or four players who have never played before, and another four who can’t practice because they are involved in football or cross country. When everybody comes together, we’re going to cause problems to other teams in the league.” Now Higuera has 13 players turning out and, as of November 17, has a record of 1 and 3, losing at Evangelical Christian, 0-4, Southwest Florida Christian Academy (SWFC), 0-1, and Canterbury, 0-8 with the win (3-1) coming at Moore Haven. Highlights included holding the fundamentally sound Evangelical to a one second half goal in the season opener on November 8. The Rays’ first win, 3-1, came at Moore Haven on November 10. It featured one goal by Josh Dacruz and two by Jorge Munoz, both scored on penalty kicks. The loss at SWFC, 0-1, on November 14, came on a penalty kick. Although SWFC was clearly the more talented team, MIA hung tough and played very physical – probably their best all-around game of the season. Marshall Daffner made several outstanding saves in the net and Cameron Zook was a defensive standout. Josh Dacruz had a few scoring opportunities, but their goalie made some good saves. MIA had a final chance to tie the game with under 10 minutes left, on a great corner, but their keeper made the stop.

At Canterbury on November 17, MIA suffered a 0-8 loss to a clearly more talented and dominant team. It was a “mercy” loss, in which the game is stopped after one team goes up by eight goals. Next game is the home opener at Winterberry Park, November 28 against St. John Neumann.