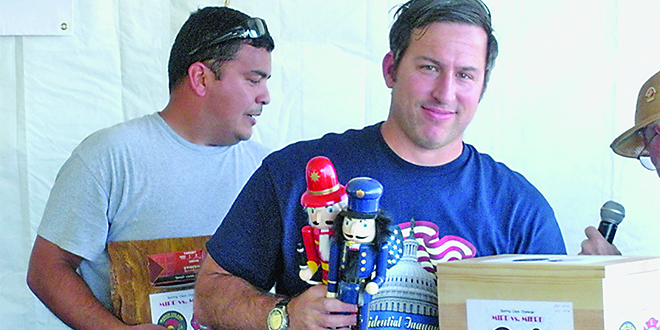 The fourth time turned out to be a record setter for the Bill Rose Memorial Sporting Clay Classic.

A record amount of money was raised for the fundraiser’s beneficiary, Marco Island Academy (MIA), at this year’s event, held recently at Gulf Coast Clays, in Port of the Islands.

“I think this year is the most we’ve ever had, which is exciting,” said Jane Watt, founder and chairman of the board for MIA. “It’s definitely the most we’ve ever raised. We raise a lot of money through sponsorships. This year, we’ll raise more than $50,000, which is huge for the school.”

About $50,000 was raised at last year’s Classic, she said. Previous Classics generated roughly $13,000 in proceeds for the school’s general fund. Watt said MIA must raise between $400,000 and $500,000 each year “just to help support the programs and deal with facilities, and this will go directly into that.”

As with previous years, the event included a luncheon for participants, music and an auction.

This year, about $10,000 was raised through winning bids for such items as a battery powered mini-bike, a fleece-lined rifle case, a hand-made wooden Ecuadorian alligator, and more. Those funds will be dedicated toward purchasing flight simulators for the new aeronautical program MIA plans to implement for the 2017-2018 school year.

The competition attracted 14 five-member teams and included a resumption of the battle begun last year between squads from Marco’s police and fire-rescue departments to see which was more proficient at hitting flying clay pigeon targets at multiple stations arrayed over a laid-out course. The police department came away with bragging rights this year.

For the first time, the rangers from the National Park Service also fielded a team for the Classic. Ranger David Fireman of Marco, who is also an MIA board member, said the event is one of the school’s biggest fundraisers.

“We’re getting community involvement,” said Fireman. There’re a lot of folks from Marco Island who come out and participate. It builds camaraderie and it raises money for the school.”

The event’s namesake, Bill Rose, was a Marco resident, successful businessman – he founded Rose Marina – philanthropist, avid boater and flier, and former U.S. Marine, who passed away in 2010 at the age
of 83.

It was Bill Rose’s friend, Terry McCreanor, of Morgan Stanley Financial on Marco, who created the Classic. Funds are raised through participant registrations, sponsorships, and silent and live auctions.

Before the competition began, a moment of silence was held and Taps played to honor Rose’s memory.

“It’s really neat when we do an event that’s in honor of someone else,” said Watt. “It’s an opportunity to memorialize someone who’s been important to our community. Bill Rose, for example, he’s a staple on Marco Island. I think it’s awesome that we have a chance to take time to remember him.”

Watt said the Classic’s co-chairwomen this year, Marianne Iordanou and Brenda Rhinehart, were instrumental in making it a success. For both, this was their first time taking part in organizing the event.

“Well, I just love Marco Island Academy,” said Rhinehart. “I’m just very interested in helping young people get a good education and have a choice in where they get their education. I think having a high school on the island is very important, so I wanted to get involved.”