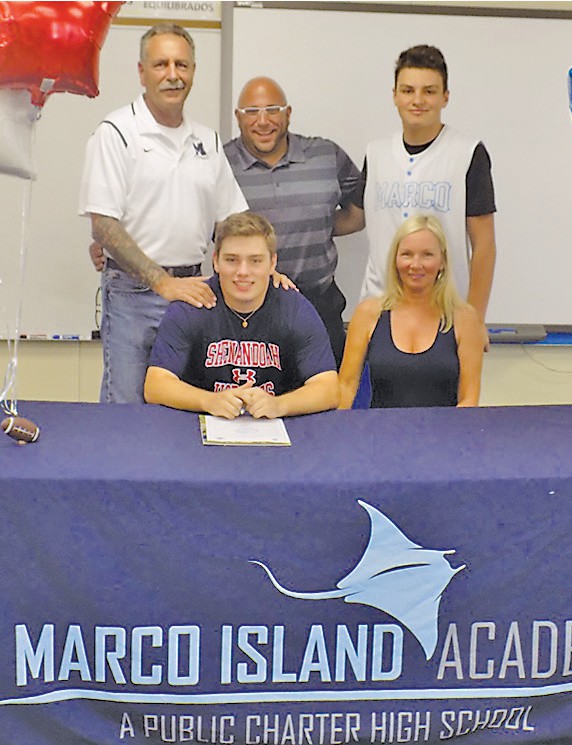 Vinny Moller, seated with his mother, Tina, is joined by his father, Vincent Sr., Head Coach Damon Coiro, and brother Dominic, who is an MIA freshman. The signing ceremony was a big deal for MIA and its football program. Photo by Barry Gwinn

This fall, Vincent Moller will be trading waving coconut palms for the brilliant autumn foliage of oak, chestnut, maple, and ash trees of the storied Shenandoah Valley in Virginia.

Shenandoah University (SU), an NCAA Division III school of about 4,000 students, wants Vinny to play football there. On April 4, in a ceremony at Marco Island Academy (MIA), Vinny agreed to do just that, by signing a letter of intent, signifying his intention to go to SU and ending a recruiting process which had begun the previous fall. The SU Hornets take their football seriously, and compete with a full slate of position coaches in the nineteam Old Dominion Athletic Conference. They were 6 and 4 last year. Only the best high school athletes play at the college level. SU must have liked what they saw in Vinny. “They guaranteed that I would start at fullback as a freshman,” Vinny said, “That meant I was going to get plenty of playing time.” NCAA rules forbid SU’s successful head coach, Scott Yoder, from commenting about their recruit, but MIA Head Coach Damon Coiro (Pronounced Koreo) had plenty to say.

“Vin is our first player this year to commit to play football at the next level,” says Coiro, “Signing the ‘letter of intent’ allows Vin the peace of mind in knowing that his film has been evaluated and his ability, academic achievements, and character traits have garnered him the opportunity to be a part of the football program at Shenandoah University.”

Vinny’s dad, Vincent Sr., a mechanical engineer, was one of the first to recognize his son’s skills and aptitude as a football player. Although, residing in Portage, Wisconsin, Vincent, Sr. contacted the coaches and recruiters at the schools Vinny was interested in and sent them a film of Vinny’s football highlights, which he put together. The icing on the cake was when Coach Coiro called the SU coach and recommended Vinny for their football program. Coiro deflects the credit to Vinny’s father. “Vinny was extremely fortunate, and much of the credit needs to be extended to Mr. Moller. He was on top of the recruiting process for his son,” Coiro said, “I was able to make phone calls on Vinny’s behalf, recommending Shenandoah as a place Vin could be successful, but it is Vin’s father who really paved the way for him, taking him on visits, making sure all of the t’s were crossed and i’s dotted.”

Vinny played half-back, linebacker, and special teams for Coiro last year. The two developed a special relationship. “Vinny was an iron man for us and led by example,” Coiro said. “He gave his all and if I could have cloned him, I would have. I identify with the type of player I want in Vinny.” Guts, hustle, spirit, and pride toward the MIA community are some of the other qualities Coiro admires in Vinny. Tina Moller, a hard charging real estate agent, certainly agrees but would also add “commitment, drive, and dedication” to the list. As a single mom, she has raised Vinny and his two younger brothers for the past six years. She has more than her share of grit and guts herself. She demonstrated this last fall, when Vinny wanted to play in a game the day after he had eye surgery.

Last October, during a Wednesday practice before a Friday night game, Vinny tore a tear duct in his right eye after being inadvertently poked by a teammate. As is common with such injuries, he suffered acute pain and blurred vision as a result. “You could lift the eye lid and see the back of the eyeball,” said Coach Coiro. Vinny asked for gauze to be taped over the eye and insisted on finishing practice. The next day, surgery was performed, with a stent being placed in the tear duct. As for the game the next day, it was a no brainer for Vinny. “I couldn’t let the team down,” he told me. “That’s right,” said Coach Coiro, “he would probably lose his eyesight for the team.” But what about Mom? Would she go for it? She would. “Vinny had such dedication and commitment to the team, that I couldn’t bear to keep him from playing,” she said, “When you see this kind of determination, you don’t want to spoil it.” Vinny gets total support from his mom and dad for the game that he loves. Now he gets to play it at the next level. SU Football Camp starts August 9th.

SU will be getting much more than a football player. Vinny, with a 3.85 weighted GPA at MIA, hopes to become an FBI agent someday. Another reason he chose SU is its close proximity to Washington (75 miles) and its sponsorship of internships with the FBI and other federal law enforcement agencies. He will major in Criminal Justice and avail himself of these opportunities. He is also a history buff and will be going to school among some of the great battlefields of the Civil War. And so, the talented hard working football player is, in addition, the man with a plan. Football has placed him in a position to realize his dreams.