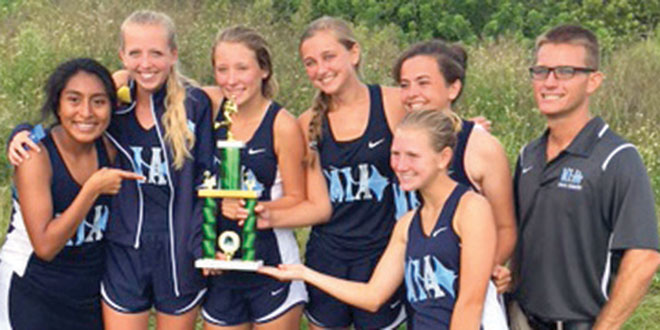 As the sun came up last Saturday, on the bucolic campus of Palmetto Ridge High School (PRHS) located near Immokalee and Oil Well Roads, the Marco Island Academy (MIA) girls cross country team made school history. Competing against six other high schools in PRHS’s inaugural Beware the Bear Invitational, the girls came in second overall, for their first trophy ever. Only Community School scored higher. On the 5,000-meter (about 3 miles) course, Olivia Watt ran a personal best of 20:22.52, which also set an MIA school record. Watt, an MIA junior, finished 1 minute 12 seconds in front of second place Palmetto Ridge – an eternity in cross country. Thirty-six girls were entered in the race. By all reports, the course was challenging and well planned. Watt had surged to the lead on an early straightaway and extended it throughout the rest of the course, which had plenty of twists and turns. Anna Chamberlain’s 4th place finish, along with better than expected finishes by the rest of the team, cemented their trip to the podium. “The course was flat and the morning was cool, which helped nearly the entire team set personal records for the season,” said Olivia, “ The course had a lot of switchbacks, so it seemed shorter and we could see Coach more often. Overall, I was excited to see that all our hard work is finally paying off. It was a great race!” Coach Bruce Kretschmer was also thrilled with the teams’ performances, noting that the boys and girls teams took a combined 20 minutes off their prior best times. “Livvy Watt is the most dedicated runner I have ever coached,” said Kretschmer, “She comes early to practice and asks about extra work afterward. She literally goes the extra mile.”