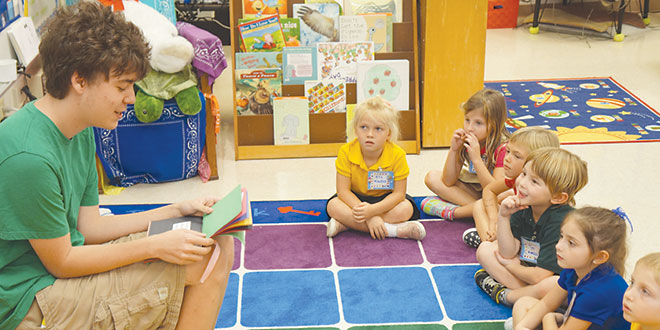 Creative writing at Marco Island Academy (MIA) is an elective class taught by David Horn. The students range from 9th to 12th grade. Some of the writing assignments include different forms of poetry, a story from the perspective of an object and dialogues. Students are encouraged to stretch their imaginations while learning about the various forms of writing as a form of self-expression and communication.

Keeping with the theme of Halloween, the high school students’ first-quarter final was to write an original spooky story. Students were given the choice 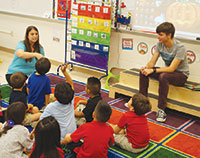 of writing a scary story or a children’s story. Students who wrote the children’s stories worked in teams, and also created colorful books to bring to the elementary school.

Days before Halloween, Horn and fourteen high school students took their creations over to Tommie Barfield Elementary, where they divided up, and read the two different stories to the kindergarten classes.

Horn says that he and his students “wanted to encapsulate the fun part of the Halloween spirit” for the elementary school children.

One of the stories was “Where’s My Costume?” – a clever story about a girl named Autumn who misplaces her Halloween costume. The book details all the places Autumn looks for her costume, until she eventually finds it, 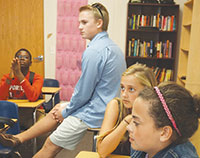 MIA students get ready to go to TBE.

The other original story, “Are You Really a Monster?” is about Ghouls the Ghost and Wally the Werewolf, two monsters who dress up like people and go trick-or-treating for the first time.

The kindergartners enjoyed the original stories, and having the teenagers reading to them. Many asked questions and engaged the older students in conversation.

Although appearing quite experienced, sophomore Josiah Hurtley admitted that he had “never read to children before.” Following the stories, the youngsters asked Josiah questions about Halloween, which he readily answered, and told him about their planned Halloween costumes.

Andrew Nichols, 10th grade, was part of the team that created the children’s books, as well as one of the student readers. While Andrew read 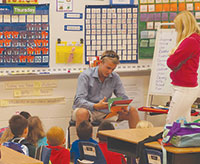 to the youngsters they surrounded him on the floor, hanging on his every word.

In addition to Andrew, the other creative writing students who wrote the children’s books are Morgan Jones, Adalid Lova, Rayhan Smith and Julia Wagner.

Senior Aidan Kahn wrote a story too scary to read to the children. Instead he read the age-appropriate books created by his classmates. Aidan told us that he has “experience reading to my little cousins,” which he used while reading to the Tommie Barfield children, changing the tone of his voice to entertain them.

Both the MIA students and the TBE students enjoyed the experience. Horn says that through his students he wanted to pass along the message to the youngsters that “writing is always cool.”