The fundraiser was named in honor of the late Bill Rose of Rose River Marina on Marco Island and Rose Packing of Illinois. Terrence McCreanor, a good friend of Bill’s, came up with the idea for a sporting clays fundraiser and thought Bill would have been a great supporter. “He was bigger than life itself,” stated McCreanor, adding that Bill loved noise, action and of course, a good time.

Bill’s wife Myrtle Rose agreed. She was in contact with Bill’s children who also found it fitting to host the event in their father’s name. Bill’s children and Myrtle were at the event, which featured a table full of photos and memorabilia of the Rose family.

“There were 66 shooters, which is incredible for a first time event,” explained MIA Chair Jane Watt. “There are 15 (shooting) stations, and normally you have four teams per station. Since we had so many participants, we increased some of the teams to five people.

“The entire theme was patriotic,” she 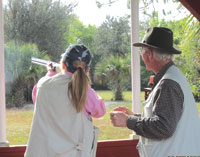 Shooters traveled to 15 stations to take aim at clays

added. The MICMS and MIA band played patriotic songs, and Peter Servente, a student at MIA, played TAPS on the trumpet at the end of the event. Bill Rose’s Marine flag flew high in the air as a tribute.

Students volunteered during lunch which was provided by Guy and Lisa’s Philly Grille, located on Marco. Just before lunch, MIA student Daniel Hodsdon played “Amazing Grace” on the bagpipes.

Fund raising was certainly in the air during the live auction. Myrtle Rose donated Bull Horns which were won by a 10-year-old boy, Jake Lowe. He stated that he plans to proudly display them in his bedroom.

“Everyone had a great time, and we raised nearly $14,000 for MIA,” added Watt. “We have matching funds available (which began on Jan. 25) for up to $100,000. Every dollar that was raised at the event will be doubled through the match.” For the next two months, the school will be working hard to raise the additional matching funds to hopefully reach the full amount.

To donate towards the matching funds or to learn more about Marco Island Academy Charter High School, visit www.marcoislandacademy.com or call 239-393-5133. Naming rights for classrooms, gardens, signs and more are still available at the school as well.