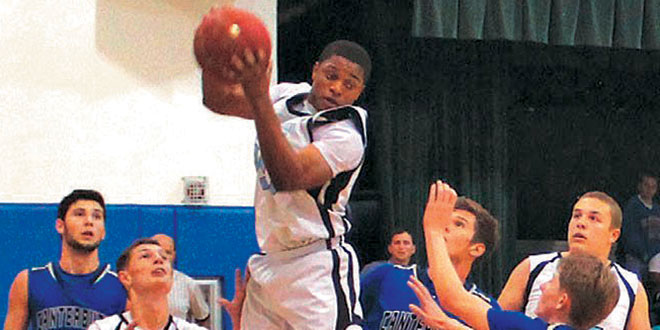 Photo by Roger LaLondeMIA’s Patrick Michel comes down with rebound in the Rays victory over Canterbury.

The Marco Island Academy (MIA) boys basketball team scored on the court and in the classroom.

The next highest score came from Class 2A, as Covenant Christian of Palm Bay recorded a 3.546.

Kelly Monnot, in her first year as MIA athletic director, reported grades for the first time. “For me it is a new avenue for MIA to recognize scholar athletes. It is an exciting way to honor their all-around talents.”

FHSAA recognizes each sport for its academic achievements. At the end of the year it will tally all points earned to recognize the overall top schools. MIA registered nine points for basketball.

Coach Roger Raymond has stressed academics at the high school and middle school levels, where he has the Marco Island Charter Middle School cross country and track teams.

“Coaches emphasize grades,” Raymond said. “Sports bring about a discipline that carries over into the classroom. They learn about becoming young adults through the two. MIA is phenomenal when it comes to academics, and coaches continue its importance.”