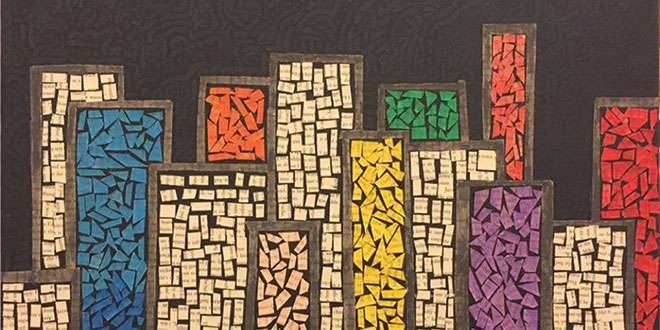 Submitted “City of Lights Life,” by Anastasia Baran.Manhattan’s skyline has never been so bright and colorful.

Girl with Butterflies,” by Brenda Perez, was inspired by a Taylor Swift song.

The Marco Island Center for the Arts (the “Arts Center”) started 40 years ago. It describes itself as a “cultural center available to those who wish to enrich their lives and those of others, and to create a greater sense of purpose in life.” It has certainly worked out that way for Anastasia (Ana) Baran and Brenda Perez.

Their story begins in February 2014, when Hyla Crane was brought in as executive director of the Center. She hit the ground running. One of the first things she did was to revive the Young Artists Academy (YAA), a program offered to nurture aspiring student artists in the area. Two of the first students to sign up and stick with this program were Ana Baran and Brenda Perez, both art students at Marco Island Academy (MIA). Baran and Perez were faithful attendees of the YAA programs and labored under the radar until they were discovered, in spectacular fashion, at the Arts Center’s Young at Heart Gala on February 28th of this year. “It is one of our major fundraisers,” Crane told me, “But this year we wanted to do something different. We wanted to include student art work in the auction.” The gala was held at the Marco Island Country Club and featured over 76 donated items and gift certificates, which were auctioned off – most at silent auction, but some after spirited open bidding. Jane Watt, founder and board chair of Marco Island Academy was honored at this glittering affair, but two of her students stole the show.

Crane had been watching and interacting with Ana and Brenda as they attended and progressed at the Young Artists Academy, from 2014 to the present. “I was impressed with their maturity and poise,” said Crane, “I also appreciated the quality of their artwork at YAA. That was a major factor. I felt that they would be the best candidates to showcase their work at the gala.” Crane called Rob Eder, MIA’s art teacher, and asked him to set it up. The plan was to have the girls paint pictures suitable for wall hanging, which would be auctioned off at the gala. “I was pleased with the selection 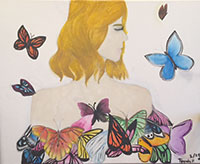 SubmittedGirl with Butterflies,” by Brenda Perez, was inspired by a Taylor Swift song.

of these two girls,” said Eder, “Both of them genuinely want to pursue a career in visual arts.” Baran, a senior and Perez, a junior began working on their paintings two weeks before the gala. They were to complete the paintings at the gala. “Both were up for this and were excited about doing it,” said Eder, “It’s not for every teenager to get up in front of a bunch of people and paint.”

Ana Baran is a senior at MIA and says that she has been creative for most of her life. She is hoping for a career in painting and photography. Ana credits her Marco Island Charter Middle School art teacher with instilling her passion for art. “Mr. Totten was a great art teacher,” she says, “He taught me the basics and had a passion for painting. That got me started in painting, mostly with acrylics.” When Ana got to MIA she loaded up on art courses. When Mr. Eder told her about painting at an Arts Center fundraiser, she determined to make the most of her opportunity. “I wanted to make something very different, something I hadn’t seen before,” said Ana, “I didn’t want to use just paint.” A couple of summers before, Ana had visited New York City and “had my breath taken away by the sky scrapers.” Those skyscrapers stuck with her and were the inspiration for her painting – but, as she said, it wasn’t all painting. She used acrylic paint and pages from an old book. She cut the pages out in strips, painted them, and then cut them into small squares. She then glued the paper squares into outlines of the skyscrapers. The result was a stunningly colorful painting evoking the nighttime Manhattan skyline. Ana calls it “The City of Lights Life.”

Brenda Perez is finishing up her junior year at MIA. She has always liked drawing, and credits her MIA art teacher, Rob Eder with inspiring her to pursue a career in art. His art history course was especially inspirational. “Mr. Eder would show us pictures of the old masters and explain the backgrounds of the artists (both classical and modern). He told us the stories behind each of their paintings,” Brenda said, “During this course, I knew I 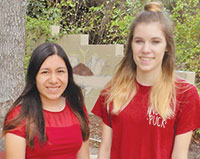 Photos by Barry Gwinn Brenda Perez (left) and Anastasia Baran in MIA’s Memorial Garden. At auction during an Arts Center fundraiser, their two paintings sold for a combined $5,000.

wanted to be an artist.” Now she had to decide what to paint in front of a large crowd of strangers. Like many artists, many of her ideas came from things that she saw or songs that she had heard. The idea for her painting came from a Taylor Swift song, “Clean.” “The song doesn’t mention butterflies,” Brenda said, “but I had this image in my head of a woman with a lot of butterflies surrounding her.” Using acrylic paints and pictures of butterflies, Perez came up with an utterly charming painting of a young, demure woman, lost in a reverie among some of nature’s most beautiful creatures. Ana and Brenda had two weeks to prepare their paintings before the Arts Center Gala. They were to complete about 70% of their paintings beforehand, with the rest to be done at the gala.

On the night of the gala, Ana and Brenda lugged their paintings and materials to the Island Country Club and were directed to set up their easels at the back of the hall, among tables filled with silent auction items. The crowd circulated among the tables, bidding in the silent auction but also stopping to watch the girls paint. Four of those watching were particularly taken by the paintings – Rene Champagne, retired CEO of ITT Educational Services, and his wife Tish, and Jim Richards, President of ACA International and his wife Allyson. Coincidentally, Champagne is a director and treasurer at MIA, while Richards is an emeritus director at the Arts Center.

Finally, the paintings were completed and carried up to center stage for the bidding. The first picture to be auctioned was Perez’s young woman with the butterflies. “I didn’t think it would sell for a whole lot,” said Perez, “I thought the first offer of $100 was extremely generous. Then the bid started to go up. Someone to my right bid $1,000. I didn’t think it [would] go for anything close to that. The next person said $2,000 (which was the winning bid) and I was completely speechless.” That next person was Jim and Allyson Richards. “Brenda’s father has done some work for me,” said Richards, “We wanted to help. Allyson and I have [Brenda’s painting] prominently displayed in our jointly occupied office here 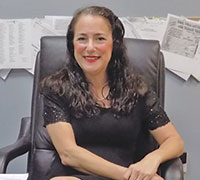 in Marco. It is our intention to give it back to her and her family when she graduates from high school.” Next up was Baran’s “City of Lights Life.”

Rene Champagne was disappointed that he did not get Perez’s painting at $1,000 and resolved to do better with Baran’s. He made sure with a winning bid of $3,000 this time. Ana Baran was overjoyed at the result. “I was expecting maybe $80 to $100,” said Baran, “After Brenda’s was auctioned, I was very nervous to see how mine would go. My heart was racing. The bidding slowed down once the price got higher, [but finally reached $3,000]. I was shocked at the fact that it would even be worth that much.” Tish and Rene Champagne are having the painting professionally framed and will donate it to MIA for display at the school. “It will be a tremendous image for the [Marco Island] Academy,” Champagne said.

Both Ana and Brenda had an additional reason to be overjoyed. Hyla Crane had learned that Baran’s dad was concerned that the family might not be able to afford sending Ana to Ringling College of Art and Design in Sarasota. “Normally, all auction proceeds would go for funding the operations of the Center for the Arts,” Crane said, “In this case I thought it would be nice to split the proceeds with Ana and Brenda. The [Young at Heart Gala] board agreed.” Checks for half the proceeds were cut and delivered to Perez and Baran. Both have received their checks and want to use the proceeds to attend Ringling College of Art and Design in Sarasota. Baran, a senior has been accepted to Ringling, but for now, will be unable to attend. “Ringling is way too expensive,” she says, “At $56,000 [per year], it is out of my reach, even with available scholarships.” She plans to at least get her associates degree at Southwestern Florida State College. Regrettably there is no art program there, she says. Perez, a junior has another year to get her ducks in a row. “My plans for after college involve doing something involving art,” she told me, “My dream would be to go to Ringling in Sarasota.” With talent like this, we can only hope that Ana and Brenda’s dreams will come true.