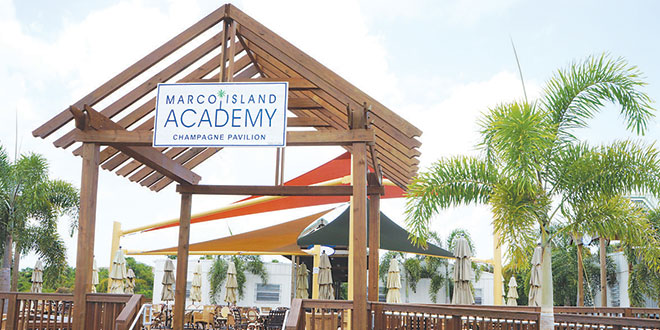 This year the applications exceeded the school’s 255 student maximum. MIA is now at full capacity, with a waiting list. This is a 50 student increase from last year’s student population. Impressive considering the school opened its doors in 2011, with only 68 students. By its fourth year the school was full, and there was a waiting list for every grade.

What is behind the increase? Word of the school’s recent “A” academic rating and success of the athletic program has spread. Applicants from Marco Island Charter Middle School (MICMS), Lely and Manatee Middle Schools have flooded in. Deneen said that this year there were also a number of out-of-state applications from students planning a

Deneen Rose sorts the growing number of student applications for the 2015-2016 school year.

move to Collier County by the fall.

Spots are first filled by returning students during the re-enrollment period, which ran January 8-17. Applicants for the remaining spots must apply during open enrollment, which was between February 1 and March 1.

Selection is by a lottery system. In addition, all applicants are required to have an interview at the school. “Getting to know them, letting them get to know us, and working with them to make sure it is a good fit,” explains Deneen. Interviews are conducted by a team comprised of MIA’s Principal Melissa Scott, Vice Principal Amber Prange and Dean of Students Kelly Monnot.

Chris Zumstein, the school’s guidance counselor, is also on hand, and works with the interview team. His expertise is especially needed in the case of 11th and 12th grade, home-school and private school applicants, where graduation requirements need to 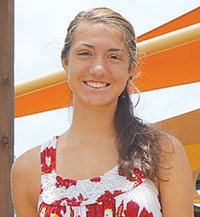 Miranda Webb, getting ready for her interview at MIA.

Applicant Seth Wilson had his interview on June 12. Seth, an incoming 10th grader, spent his first year of high school at Lely. When asked why the switch, he says “the way the Academy is set up is a better fit for how I learn.” His mother Michelle agreed that a smaller environment where Seth wouldn’t get “lost in the shuffle” would benefit him.

Miranda Webb, who just finished 8th grade at MICMS, was also at the school on June 12 for her required interview. Put together and poised, she said she hadn’t done anything special to prepare for the interview other than choose her outfit and take a deep breath.

Giving the student’s perspective on the process, Jonathan Kirstein, also a MICMS graduate, described his MIA interview as a “comfortable talk” with the interview team. Echoing what Deneen Rose had 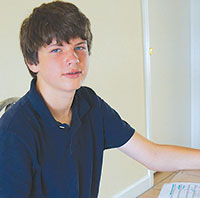 Jonathan Kirstein looks over his proposed MIA schedule for the fall.

described, he said that he was asked his interests and told about class offerings so he could choose his own schedule. Jonathan’s sister Katie is an MIA 2015 graduate. Jonathan, knowing that he wanted to attend the school, put in his application as soon as open enrollment began.

Residency on Marco Island does not guarantee a spot. The only preference given to applicants may be given to the sibling of an enrolled student, the child of a board member, the child of a school employee or to a child of an active duty member of the U.S. Armed Forces.

Is there anything parents can do to improve their child’s chances of acceptance? Some advice from Deneen: Get your application in on time and make sure all questions are answered and complete. She says “When we are at full capacity the hardest part of my job is turning a student away.”