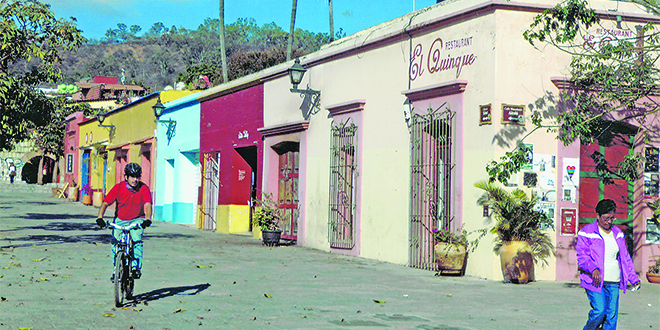 Photos by: Dave Pattison | A street scene in Oaxaca, a Spanish colonial city.

The Mayan and indigenous cultures of Mexico have left an indelible mark preserving their ancient cultures and heritage. And colonial cities and villages reflect Mexico’s Spanish roots. On a trip sponsored by Grand Circle Travel, specializing in cultural senior tours, I saw preserved Mayan ruins dating back several centuries and Spanish colonial cities that have protected their heritage and preserved their history, a lesson for everyone.

We spent our first four days exploring the colonial city and regions of Oaxaca, a colorful and ancient place that is ranked second to Mexico City as a Mexican tourist destination. Its Spanish roots are reflected in its huge main square, its impressive and lavish Santo Domingo Church, dating from 1555, and its many street vendors, entertainers and its cafes and restaurants that liven its atmosphere. A special treat was a stop at a local chocolate factory for a demonstration and taste. Another visit with strong ties to its culinary reputation was a stroll through the bustling and crowded covered market containing woven baskets, tortillas, chili peppers, and every type of fruits and vegetables. It also included grasshoppers toasted with chili, that I avoided tasting. The appearance of Oaxaca is enhanced by the very colorfully dressed women and street vendors.

The next day we drove in the countryside to visit the small village of Mitla, an ancient Zapotec (indigenous) religious and ceremonial site with ruins dating from 500 B.C. A UNESCO world heritage site, Mitla’s ruins feature identical geometric designs carved on all its buildings. Our country trip also featured stopping at a village of Teotitlan del Valle, where we witnessed a weaving demonstration of brightly hued textiles.

Next we toured the huge and fascinating ruin of Zapotec city atop the UNESCO site of Monte Alban, containing huge pyramids, elaborate temples, wide plazas, and other residential buildings. It is one of the largest widespread areas of ancient ruins that I have ever viewed.

Following these adventures we visited our first Mayan ruin, the legendary Palenque, a compact ruin that is reported to be he best examples of ancient Mayan architecture, and contains one of the largest step pyramids of Mayan origin. Palenque is surrounded by a thick tropical jungle that maximizes its unique setting.

Our journey took us to the famous peninsula 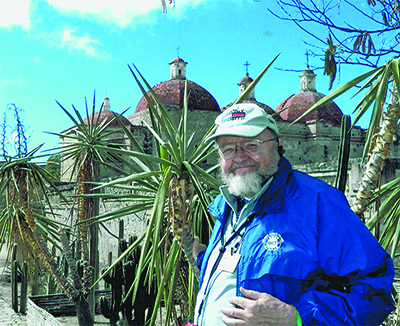 Submitted Photo | The author at the church in Mitla.

where we resided for four days in Merida, an old town of exquisite Spanish colonial architecture that has long been on my “bucket” list as the place to explore the nearby Mayan settlements of wide acclaim. Merida has one of the largest cathedrals in the Americas, dating from 1562 and other typical Spanish structures. The first Mayan ruin we visited was Uxmal, one of the most important Mayan settlements in the Yucatan, with many fascinating pyramids, temples and other structures revealing the Mayan art of building. Many of the structures on the site are designed and reveal the Mayans ancient concern and knowledge about astronomy and the ability of create an accurate calendar. The most dominant structure in Uxmal is its huge pyramid, which is immense and a towering spectacle. Iguanas have also found Uxmal a delightful place to reside. Later we visited and had lunch at a 19th century hacienda, typical of Spanish colonial architecture.

Our final day in Mexico was highlighted by a visit to the legendary Chichen Itza Mayan settlement. It features the huge step pyramid known as the El Castillo (the castle), which was acclaimed one of the new Seven Wonders of the World in 2007. It is one of the most spectacular and well known symbols of the exceptionally advanced Mayan culture. Chichen Itza also features the largest ball court in the Mayan world, as well as temples, an observatory to astronomy, platforms and other interesting structures.

The sites of these impressive Mayan ruins that have been reclaimed from the jungle reveal the genius and creativity of the Mayan civilization. It was quite a thrill to walk among the temples, pyramids, platforms and other structures to appreciate the grandeur of this mysterious Mayan culture. And visiting Chichen Itza was an appropriate and fitting way to end this fascinating journey of learning and discovery.