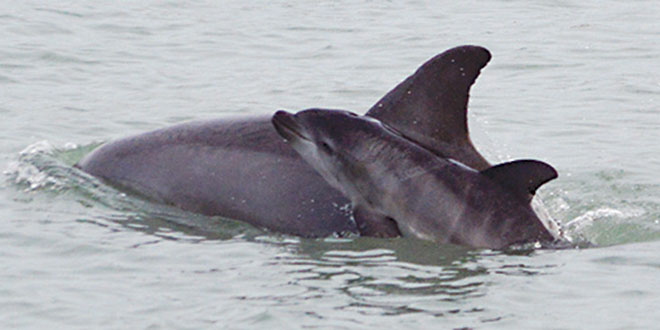 Seven swans a-swimming, six geese a-laying, five baby dolphins. What? That’s not how the song goes! Well, it is this year, and all of the new baby dolphins around Marco Island deserve a golden ring.

The survey team on board The Dolphin Explorer have seen five brand new calves so far this fall, with “so far” being the optimal words. Several adult females are still on our “nice” list as potential moms this season. Birthing usually takes place from September thru January in our area, so we are looking for more young every day.

These newborn are quite a sight to behold. Since dolphins are mammals and breathe air, the first few hours are spent learning how to use the lungs and develop a breathing pattern. They will be stuck like glue to mom’s side until their instincts are finely tuned.

When brand new, they will have creases in their skin called fetal folds from the positioning inside of the womb. These will be evident for a few weeks, until the calf has nursed from mom sufficiently to fill out its physical structure.

The newborn will be about 24 inches long at birth and weigh about 25 pounds.

Let’s meet some of the young ones and their moms.

On Oct. 2, adult female Sparky was seen socializing with other area dolphins, but there was no baby in sight. The very next day, Sparky was making her way through the Marco River with a newborn along side! The new calf was named Holly and was less than 24 hours old when first noticed.

With nearly nine years of survey work under their belt, The Dolphin Explorer team was looking at the fourth known calf of Sparky. Her first known young one is Orange, which was born approximately 2003-2004. Next came Pinta in 2007, and then Keegan in 2010. Holly has been sighted on a regular basis and appears healthy and normal.

An interesting twist could develop with Sparky. Her first 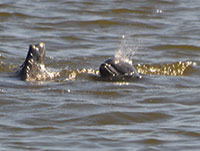 calf known to us is Orange. Orange is of proper physical maturity to become a mom as well, and is on our list as a potential mom for this season. Wouldn’t it be something if Orange had a calf, making Sparky a mom and a grandmom in the same year!

On Oct. 10, Capatin Hook (yes, the captain is a girl) was seen with her third known calf, which was named Charlie. Both were seen just a few weeks ago and appeared to be doing fine. This would be a major achievement for Captain Hook. Both of her previous calves, Hoppy born in 2008 and Sunshine born in 2011, did not survive. Our entire team is hoping that the third time is a charm, and that Charlie will be a survivor.

In November, another newborn was sighted and appeared to be doing well. Once again, the fetal folds indicated that this youngster was only weeks old.

However, the adult female was not one that we recognized, and we have not seen the pair in our survey area since that day. It was possibly a female from another area passing through our waters and has returned to her original territory with the young one.

There was a break in the birthing activity until the first week of December when adult female Darwina made an appearance with a newborn. This is her third calf of which we are aware. Bouncer, born in 2006, and Gumbo, born in 2008, are her two previous offspring. This newest one is named Rose.

You may have noticed with the other adult females that the number of years that the same mom gives birth to a newborn is three years or more apart, while Bouncer and Gumbo were only two years apart. Bouncer did not survive, and Darwina became pregnant the very next season, giving birth to Gumbo in 2008. The gestation, or pregnancy period, for a dolphin is 12-13 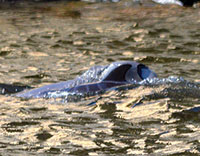 After several great sightings on Friday afternoon, Dec. 12, we were making our way back to the Rose Marina when we came upon one final pod of dolphins. Sure enough, among some adult males and females, there was another small blip in the water. After looking more closely, we noticed the mom was Sparkle, and we knew that this was her fourth calf, all of which have survived. When we first met Sparkle, she had a young one with her named Farkle, which was born 2003-2004. Next came Hilton, born in 2007, and then Wintriss, born in 2011.

Like clockwork, Sparkle has consistently produced a newborn every three to four years. All of her offspring have survived, ranking her at the top of the list as one of our most productive females in our survey area. We have every confidence that this newest born calf of hers, named Castaway, will be just as healthy as its siblings.

What a great way to end the year and celebrate the holidays. Five new babies giving hope that our dolphin population will continue to thrive in our area waters. Just another stepping stone to assure nature’s balance is in tact.

As we close 2014 and begin a new year, I give thanks for the opportunity to experience and observe the wildlife around me. I am reminded that, as in nature, life is not always a smooth passage, and I ask you to keep this one thought in mind: When you come across a rock in your path, it just might be a stepping stone! Accept every challenge that is thrown your way and turn every obstacle into an opportunity!

Merry Christmas to all, and my sincerest wishes for a prosperous New Year!

Bob is the owner of Stepping Stone Ecotours as well as a naturalist on board The Dolphin Explorer. He is a member of the Florida Society for Ethical Ecotourism and a graduate of Leadership Marco 2014. Bob loves his wife very much!